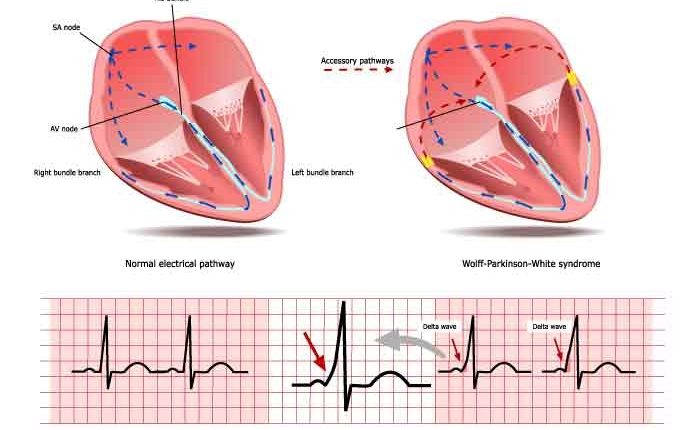 Wolff-Parkinson-White syndrome (WPW) is a disease characterised by abnormal conduction of the cardiac electrical impulse and caused by the presence of one or more accessory atrio-ventricular bundles, which may give rise to episodes of sporadic tachycardia

The disease, the aetiology of which is still not completely clear, affects one person in 450; in 70% of cases it affects males, especially at a young age, and can present in both a sporadic and familial form and be symptomatically silent.

Infants of parents with WPW syndrome may be at increased risk of developing the disease, as may infants with other congenital heart defects.

Patients with WPW syndrome often have more than one accessory pathway, and in some there may be more than eight; this has been demonstrated in individuals with Ebstein’s anomaly.

Under normal conditions, the conduction of the electrical impulse from the atria to the ventricles of the heart follows a pathway consisting of the atrio-ventricular node and bundle of His.

The atrio-ventricular node has electrophysiological characteristics of conduction velocity and refractoriness time such as to constitute a filter capable of protecting the ventricles from the conduction of too rapid and potentially dangerous atrial impulses.

In some cases there are accessory conduction pathways (VA) between the atria and ventricles that can be located at various sites of the tricuspid and mitral valve rings.

Because of their electrophysiological characteristics, similar to the cells of the common cardiac muscle, these accessory pathways do not perform the filtering function typical of the atrioventricular node, and in certain cases can conduct impulses to the ventricles at very high frequencies.

During sinus rhythm, an accessory pathway manifests itself on the electrocardiogram as ventricular pre-excitation and the presence of a ‘delta’ wave: conduction through the accessory pathway does not slow down as in the atrioventricular node, and the PQ interval on the electrocardiogram (which represents the pathway of the electrical impulse from the atria to the ventricles) is shorter than normal (pre-excitation).

In addition, the ventricular end of the accessory pathway inserts into the common cardiac muscle rather than being in continuity with the specialised conduction system: for this reason, depolarisation of part of the ventricles occurs more slowly, resulting in an electrocardiographic appearance known as a ‘delta’ wave.

If the presence of an accessory pathway is associated with episodes of palpitation, this is known as Wolff-Parkinson-White WPW syndrome

Palpitations may be due to “re-entry arrhythmias”, i.e. caused by a short circuit in which the impulse generally reaches the ventricles via the atrioventricular node and re-enters the atria via the accessory pathway travelled in the opposite direction.

The arrhythmia is perpetuated until one of the two paths (node or accessory pathway) is no longer able to conduct.

In some less frequent cases, the circuit is reversed, i.e. the accessory pathway is used in the direction from the atria to the ventricles, while the impulse returns to the atria via the bundle of His and the atrioventricular node.

In other cases, the accessory pathway is not directly involved in the mechanism that perpetuates the arrhythmia, but may contribute to the conduction to the ventricles of arrhythmias in the atria (atrial fibrillation/atrial flutter/atrial tachycardia).

If VA conduction capacities are very high (short refractoriness time) the resulting ventricular rate can be very rapid (> 250 beats per minute) and put you at risk of rapid ventricular arrhythmias and cardiac arrest.

Clinically, this syndrome may be manifested by atrial fibrillation and palpitations secondary to the above-mentioned re-entry arrhythmias.

It is not uncommon for it to be completely asymptomatic and to be discovered during an electrocardiogram performed for other reasons, e.g. during a sports medicine examination.

The diagnosis of WPW syndrome is clinical, but above all is based on the electrocadiogram, which can detect it even in an asymptomatic subject: in these cases it manifests as a delta wave, which corresponds to the widening of the rising phase of the QRS complex associated with the shortening of the PR interval.

This is due to the electrical impulse flowing through the accessory pathway rather than through the atrio-ventricular node.

If the patient has episodes of atrial fibrillation, the ECG shows rapid polymorphic tachycardia (without tip torsion).

This combination of atrial fibrillation and WPW syndrome is considered dangerous, and many antiarrhythmic drugs are contraindicated.

When an individual is in normal sinus rhythm, the characteristics of WPW syndrome are a short PR interval, a widening of the QRS complex (more than 120msec in length) with widening of the QRS ascent phase, and changes in repolarisation reflected in alterations in the ST tract and T wave.

In affected individuals, electrical activity beginning in the sinoatrial node passes through the accessory bundle as well as in the atrioventricular node.

Since the accessory bundle does not block the impulse as much as the node, the ventricles are activated by the node, and immediately afterwards by the node.

This causes the ECG changes described above.

Another diagnostic technique is the electrophysiological study: for this examination, the doctor inserts a thin, flexible catheter, equipped with electrodes at the end, through the blood vessels to different parts of the heart where they are able to map the electrical impulses.

The treatment of acute episodes of reentry arrhythmias in WPW syndrome uses drugs that act by blocking conduction through the atrioventricular node, interrupting one of the arms of the arrhythmia.

The electrophysiological study is able to identify the site of the accessory pathway, on which the approach used for ablation will depend: in the presence of a pathway located in the right sections of the heart, access is generally through the right femoral vein.

For left-handed pathways, venous access and subsequent transseptal puncture from the right atrium to the left atrium, or a “retrograde” approach via the femoral and aorta arteries will be possible.

The energy used for ablation is generally radiofrequency.

After successful ablation, episodes of re-entry arrhythmia through the accessory pathway will be prevented and the delta wave will no longer be visible on the electrocardiogram.

The long-term effectiveness of ablation is generally very high, exceeding 95%.

After successful ablation and in the absence of other arrhythmias or heart disease, no drug therapy is required.

Female alopecia: what it is and how to treat it