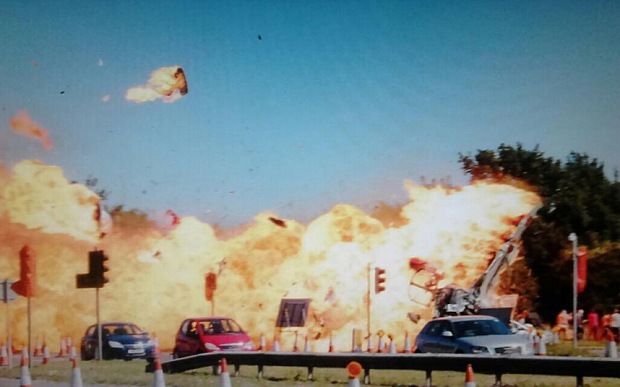 An old Hawker Hunter Jet plane crashed on August, 22 during the Shoreham Airshow, on a busy A-road. causing officially 7 dead and 14 injured people. Dramatic footage showed the plane bursting into flames as it hit the road near Shoreham Airfield, where the display was taking place. The Air Accidents Investigation Branch has begun an inquiry. Seven people died, a further two were taken to hospital, one with life threatening injuries, and 14 people were treated at the scene. Witnesses described seeing two firebombs in the sky as the 1950s plane, piloted by Andy Hill, a British Airways captain and a former RAF instructor in his 50s, failed to emerge from the stunt.

Sussex Police and the Air Accidents Investigation Branch have asked that anyone with photographs or video footage that may help with their investigations should send their contact details to shoreham.aircrash2015@sussex.pnn.police.uk. Do not send files, just contact details and information about the material you have.

All vehicles, irrespective of size are now able to leave the airport. Motorists are being asked to avoid the A27 in the Shoreham area while investigations into the crash continues.