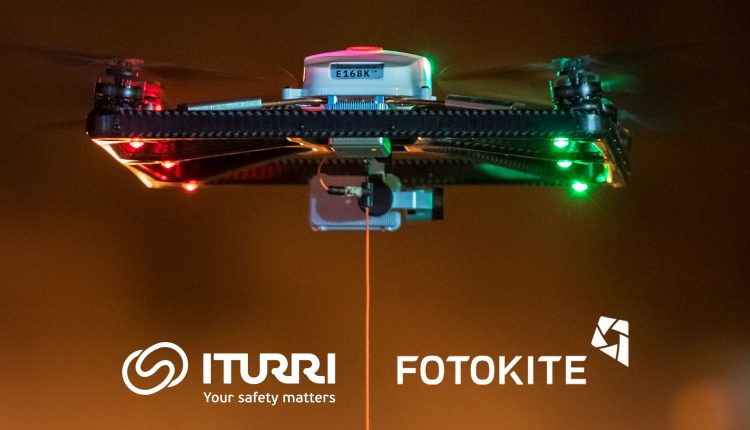 Drones and Firefighters: Fotokite announces a partnership with the Spanish Group ITURRI, leader in the manufacturing, bodywork and equipment of emergency and fire fighting vehicles, headquartered in Seville, Spain

Drones for firefighters, the alliance between ITURRI and Fotokite

The alliance of ITURRI and Fotokite will enable the distribution of Fotokite products to Firefighters in the Iberian Peninsula (Spain & Portugal) to help them gain situational awareness and in-operation safety during emergency incident responses.

Since 1947, ITURRI has been contributing to a safer and better-protected world by covering people and their surroundings with innovative, efficient and sustainable professional solutions.

Customer oriented and innovation driven, ITURRI benefits from 1,400 employees in 14 countries over four continents in order to provide daily support to more than 10,000 customer accounts worldwide.

As a world-leading fire truck manufacturer with +500 new vehicles per year, the ITURRI Group has partnered with Fotokite to offer +550,000 firefighters simple and immediate access to valuable thermal aerial information with the Fotokite Sigma.

The Fotokite Sigma allows any firefighter to quickly gain overview perspectives during critical situations at the push of a button, without any active piloting.

The Kite carries a specialized thermal aerial camera. It is robust, deployable in seconds, fully-autonomous, and provides a constant aerial perspective in emergency situations.

The system can be seamlessly integrated into any fire department with or without an established drone program.

It complements existing drone programs without adding any complexity and serves as a daily-use front line tool.

The IP55 classification and a 24h+ flight autonomy allow the Sigma to be used safely in all-weather conditions.