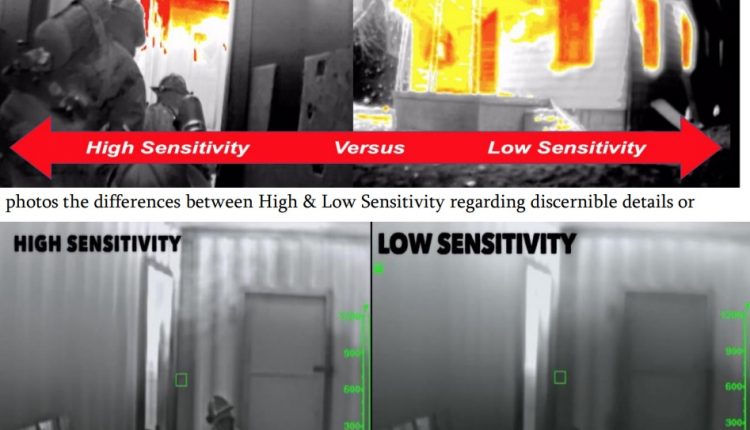 Thermal Imaging : this short article is an attempt to clarify a few misconceptions in regard to fire service thermal imaging cameras

All fire service thermal imaging cameras automatically switch gains or sensitivity modes based on the following:

• The overall heat detected within the field of view

• And at a certain percentage of pixels affected

The majority of fire service TIC’s, about thermal imaging, are dual mode sensitivity which is known as High & Low Sensitivity 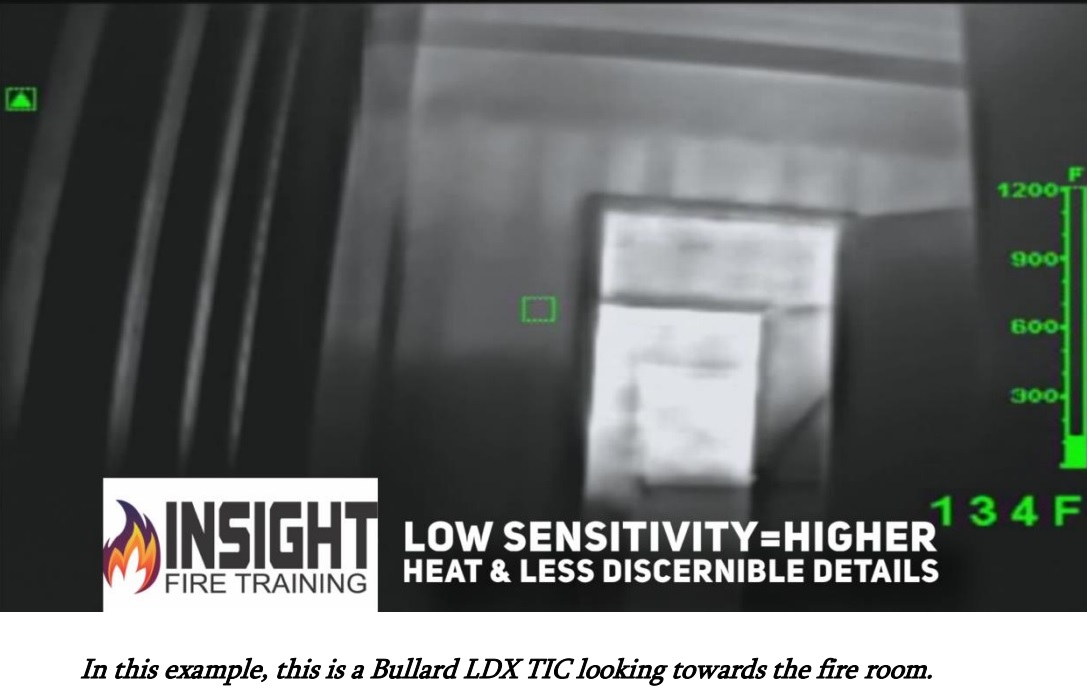 There is a misconception that certain fire service TIC’s don’t switch between high & low sensitivity and this belief is false.

If the TIC is in TI Basic mode (the NFPA 1801 required color palette), a fire service TIC will have such a high dynamic/temperature range (zero-2000 degrees) that it cannot see all temperature ranges at once.

Thermal imaging: the majority of dual temperature mode fire service TIC’s break the temperature range down into the following:

As we can see, the second range is the Low Sensitivity Range which is defined by NFPA 1801 as: “The least thermally sensitive operational mode, used to increase the thermal imager’s temperature range” NFPA 1801 Section 3.3.24.1

To clarify this statement further, many fire service TIC’s when they switch to Low Sensitivity Mode loses discernible details in the lower areas below the thermal layer.

Certain manufacturers overcome this or improve detail by the use of the following:

• Lower Thermal Sensitivity (NETD/MRTD): This is the TIC’s ability to differentiate between objects of similar temperature rated in units of milli-kelvin which equates to the thousandth of a degree.

However, firefighters will not be able to see the benefits in this until they test this in a higher heat environment. In other words, firefighters must test their choices of thermal imaging cameras in a fire environment prior to purchasing to prevent being disappointed in the lack of performance.

This is shown in the following data:

• FLIR K33-65: series TICs require 2% of the overall pixels within the Field of View to be over 300 degrees to switch to Low Sensitivity

• Bullard NXT or QXT: require 3% of the overall pixels within the Field of View to be over 240 degrees Fahrenheit to switch to Low Sensitivity.

• MSA 6000: Series require 32% of the overall pixels within the Field of View to be over 270 degrees Fahrenheit to switch to Low Sensitivity

• Leader 4.1-4.3: Series TICs require 5% of the overall pixels within the field of view to be over 392 Degrees Fahrenheit.

• Scott X380: requires one pixel to be above/or below the threshold of the temperature sensitivity level and it will automatically switch. This is known as a feature called “intelligent Focus” which allows for faster switching between different levels of heat to quickly identify objects that would not otherwise be visible within that temperature mode or span.

Important Note: Firefighter’s need to be aware that their focal point or perspective will determine their level of severity.

For example, a firefighter can be in a thermally severe environment (such as high heat conditions nearing rapid fire development) and have the TIC in high sensitivity mode by pointing it at the floor or away from the heat.

And if their TIC has a low Distance to Spot Ratio or high pixel percentage requirement to switch sensitivity modes, they will NOT detect dangerous levels of heat until they are too close for comfort.

In other words, firefighters need to know more than just how to turn the thermal imaging camera on.

There is so much more to Thermal Imaging for the fire service, yet we barely scratch the surface in our training or in this article.

Our goal is to inspire others to become intelligently aggressive and use this technology to their advantage.

Notice in the following 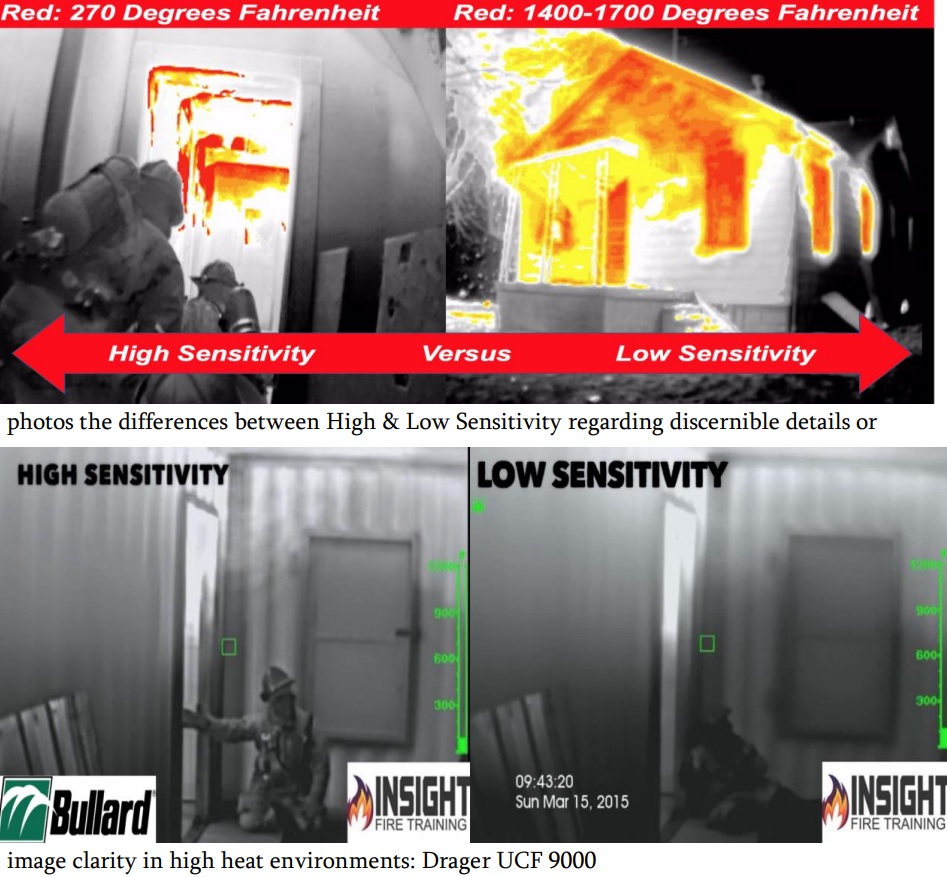 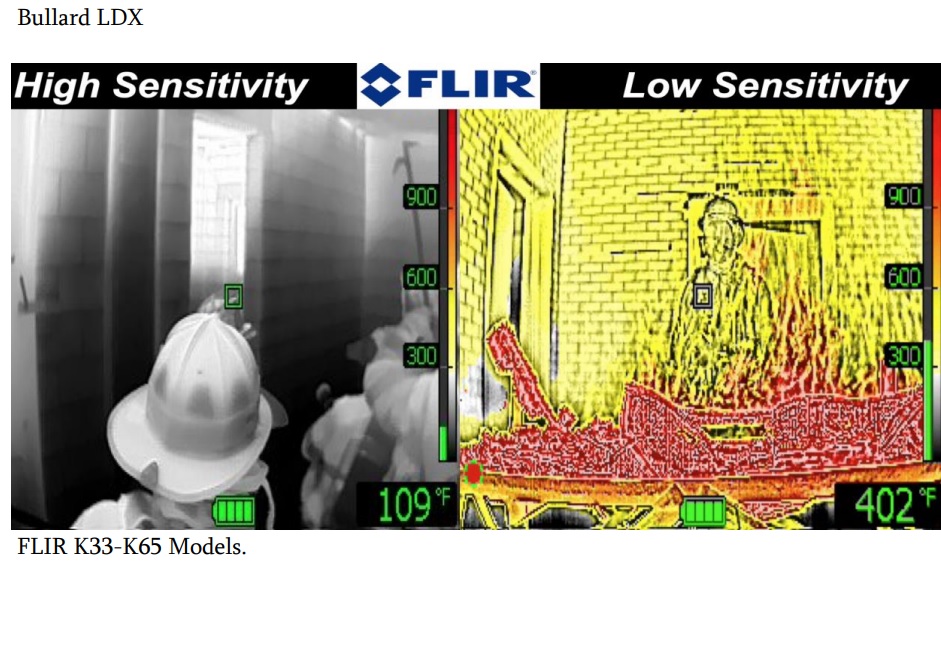 Tri-Mode Sensitivity in thermal imaging: The Exception & not the rule

There are a few fire service TIC’s that break the temperature span into three ranges instead of two.

This is an attempt to have better clarity and discernible details in higher heat environments.

However, many of these fire service TIC’s temperature range is up to 2000 degrees Fahrenheit.

This is far beyond the limits of our PPE.

Be aware that many of these Tri-Mode Sensitivity TIC’s switch at different levels of heat and their temperature/color correlations are NOT the same or standardized.

We have included the Leader 3.3 Colorization Palette that explains the varying colors throughout its maximum temperature range for an example below: 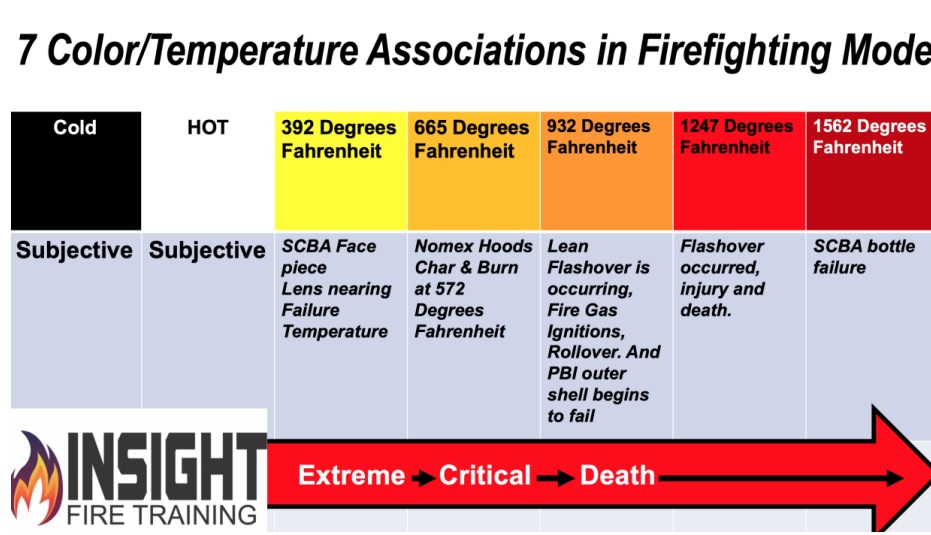 In summary, ALL fire service TICs are known as automatic gain cameras as they will switch from High Sensitivity to Low Sensitivity automatically based on the manufacturer’s predetermined specifications.

This can be compared to the human eye when in a dark environment moving to a bright environment.

In the presence of bright light, the pupil constricts to reduce the amount of light from entering and damaging the retina.

The aperture of the TIC can be compared to the pupil in the face of a large amount of heat it will constrict to prevent too much heat entering the detector producing saturation which was formally known as “white out.”

Therefore, as firefighters enter a fire environment, they need to be aware of the following:

• Low Sensitivity Mode indicates high heat conditions and should NOT be ignored. This is indicated by a green triangle inside of a square box outline located in the upper left-hand corner of the viewfinder in newer model thermal imaging cameras. In older models, the symbols can vary from any of the following: EI or an L symbol.

We hope this short article explains the differences in temperature modes (sensitivity levels) and please feel free to email or call us if you have any questions.

What is OCD (Obsessive Compulsive Disorder)?