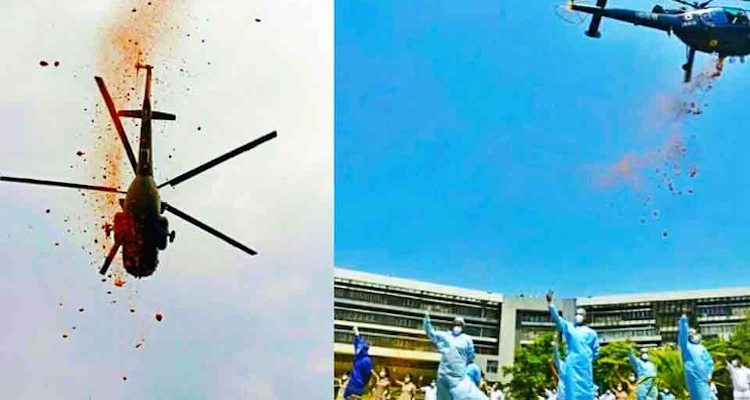 Coronavirus in India: a flower shower on hospitals to thank medical staff

India is loosing its anti-coronavirus measures in the orange and green areas of the country. There still are many doubts about the number of infections. However, morale is quite high and the Indian Government decided to thank all medics, nurses and practitioners in the front-line of COVID-19 by launching a flower shower on the hospitals.

Coronavirus in India and the number of infections

The world’s fifth-largest economy begins to emerge from the lockdown today. India, with over 40,000 infections and 1,300 confirmed deaths for coronavirus, has stopped all production activities and banned transportation six weeks ago to avoid the spread of the virus among the population that counts a one billion three hundred thousand people.

Coronavirus in India: the end of lockdown colour by colour

The anti-coronavirus measures will vary from region to region, depending on the cases recorded. India divided each area by colour according to the number of infections. The luckiest are the green zone inhabitants, where no new patient has been identified for at least three weeks.

Here, the inhabitants will be able to go out freely but the shops will only be able to provide minimal services, while the schools will remain closed and the gatherings prohibited. These regions make up half of the national territory and are concentrated in particular in the countryside, where contacts are more sparse.

The Government attributes a colour to each district according to the number of infections. It is orange if it does not have recorded new cases for at least two weeks, for example. Here, the factories reopen their doors. It is a sigh of relief for thousands of workers who must, however, respect the rules on spacing. The industrial periphery of populous New Delhi falls into this classification.

What about the red areas?

The lockdown remains in force in the red areas, where it has never stopped counting new infections. These are large cities such as New Delhi or Mumbai, which together account for a fifth of the total infections.

After the stop to internal transport, thousands of workers and students are stuck in other regions. However, starting from this morning they were finally able to return home no matter for the colour of the area. This is possible thanks to special trains set up for the occasion.

Meanwhile, yesterday the armed forces organized special initiatives to thank the medical and health personnel involved in the care of the Covid patients: in various locations throughout the country and throughout the day, helicopters launched a shower of flowers on the hospitals. Elsewhere, fighter jets flew in formation while navy ships at sea intermittently turned on signal lights.

The Indian authorities these days are however at the center of a controversy regarding the estimates of the epidemic. India, characterized by a fragile health system and widespread poverty, according to experts would have recorded very low numbers. The few tests conducted and the still strong practice in many areas of not reporting deaths to medical authorities could be the cause of an underestimation of the real incidence of the virus.

UNICEF against coronavirus and other diseases

Experts discuss the coronavirus (COVID-19) - Will this pandemic end?