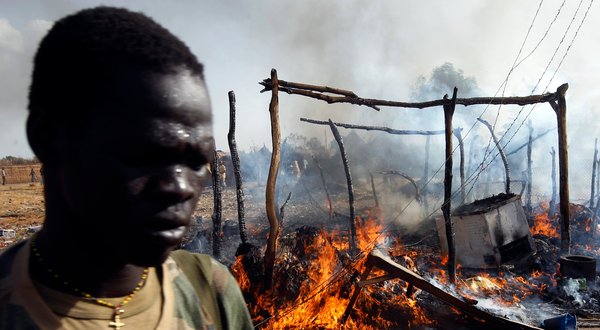 HRW has released a new report based on more than 170 interviews in June and July with survivors and witnesses, most of whom were displaced by fighting or attacks on their villages by government troops.

(Nairobi, July 22, 2015) – South Sudanese government forces and allied fighters carried out scores of killings, rapes, and widespread burning and pillage of civilian property in a military offensive in Unity State causing forced displacement, Human Rights Watch said in a report released today. The deliberate attacks on civilians and civilian property during the offensive between April and June 2015 amount to war crimes, and the killings and rapes may also constitute crimes against humanity.

The 42-page report, “They Burned it All: Destruction of Villages, Killings, and Sexual Violence in South Sudan’s Unity State,” is based on more than170 interviews in June and July with survivors and witnesses. More than 125 of these were displaced by fighting or attacks on their villages by government troops or allied militia from the Bul Nuer ethnic group. Human Rights Watch documented shocking accounts of about 60 unlawful killings of civilian women, men, and children, including the elderly. Some were hanged and others shot, and others were burned alive. Interviewees were selected randomly and the number of cases documented by Human Rights Watch almost certainly represents only a fraction of the total.

“Government-aligned forces carried out gruesome killings and widespread rapes and burned countless homes as they swept across large parts of Unity State,” saidDaniel Bekele, Africa director at Human Rights Watch. “The devastating offensive in Unity State is the latest in a conflict characterized by shocking disregard for civilian life.”

Killings took place in towns and villages but fighters from the Bul Nuer ethnic group operating alongside government forces also shot at terrified civilians as they chased them into forests and swamps. “They were hunting people and cows,” said one woman, who, like numerous others, described spending days hiding amid reeds or long grass.

Human Rights Watch spoke to people from more than 25 villages or settlements who said government forces and aligned militia had deliberately burned their villages to the ground, in whole or in part. The soldiers and militia also deliberately destroyed food stores and seeds intended for cultivation.

South Sudan’s conflict began in December 2013, triggered by a gun battle between forces loyal to President Salva Kiir and those loyal to the former Vice President Riek Machar. The conflict has been dominated by war crimes, including widespread killings of civilians because of their ethnicity or perceived allegiances. Two million people have fled their homes.

In April 2015, the government opened a multi-pronged offensive to recapture opposition-held territory in Unity State. The campaign by the Sudan People’s Liberation Army (SPLA) and allied militia has displaced at least 100,000 people, according to the United Nations. Without food, cattle, or shelter, tens of thousands of destitute people have fled to a UN base in the state’s capital, where many live in overcrowded and often unsanitary conditions. Others have fled to swampy areas where aid agencies are struggling to reach them.

The UN Security Council should expand targeted individual sanctions on commanders and others responsible for serious crimes during the Unity State offensive, and impose an arms embargo on the parties to the conflict to help stem ongoing attacks on civilians, Human Rights Watch said. United States President Barack Obama should make a public commitment to advance an arms embargo when he visits the African Union in Addis Ababa, Ethiopia, in late July, Human Rights Watch said.

The Security Council should also promote a way to increase accountability, such as the establishment of a hybrid court made up of South Sudanese and international lawyers and judges to investigate and prosecute the worst crimes or an investigation by the International Criminal Court, or both. The African Union, regional governments, and key partners of South Sudan, such as the US, should support these steps.

Some of the attacks Human Rights Watch documented involved battles with opposition fighters and their allies, especially in Mayendit and Panyijiar counties in southern Unity State. But in many cases, attacks on settlements in Rubkona, Guit, and Koch in central Unity State met with no resistance as opposition fighters and other men had already fled to try to protect their cattle or in fear of being targeted. The women, left behind with children, faced brutality from the attackers.

Human Rights Watch documented 63 cases of rape, including gang rapes and cases in which women were raped by multiple fighters. Government soldiers and Bul Nuer fighters frequently beat women, sometimes repeatedly, and threatened them with death. Many women and children were forced to porter pillaged property back to the Bul Nuer homeland, sometimes for days. Other women and girls were abducted, themselves taken as property.

Only one woman that Human Rights Watch interviewed had received any medical or other services for sexual violence.

Human Rights Watch also interviewed almost 50 people displaced by government attacks and fighting between the government and allied forces and armed civilian groups joined by some opposition fighters in in a separate but simultaneous offensive in southern Unity State. Government soldiers razed the port of Taiyer and burned parts of other towns and villages. They raped and abducted civilians and shot at people fleeing, some of whom were hit and then crushed by government tanks.

It is essential that investigations include the roles of commanding officers whose forces are implicated in the abuses. For example, the investigation should determine any criminal liability, on the basis of both direct and command responsibility, of Matthew Puljang and Thiab Gatluak Taitai, the deputy and commander of Division 4 SPLA forces of Unity State, respectively. Division 4 forces have been involved in the central Unity offensive. Commanders in charge of offensives into southern Unity State in May should also be investigated, as should the role of Chief of Staff Paul Malong in planning attacks and to determine what knowledge he had or should have had of abuses occurring.

“Women and girls are bearing the brunt of this brutal offensive as fighters target them for rape, abduction, beatings, and forced labor,” Bekele said. “Brutal attacks on fleeing civilians combined with widespread burning of villages, food, and other items that people need to survive suggests that the government’s aim was to forcibly displace people from their homes.”

“They Burned it All: Destruction of Villages, Killings, and Sexual Violence in South Sudan’s Unity State” is available at:
http://bit.ly/1fkDuxA

from ReliefWeb Headlines http://bit.ly/1fkDuxx
via IFTTT