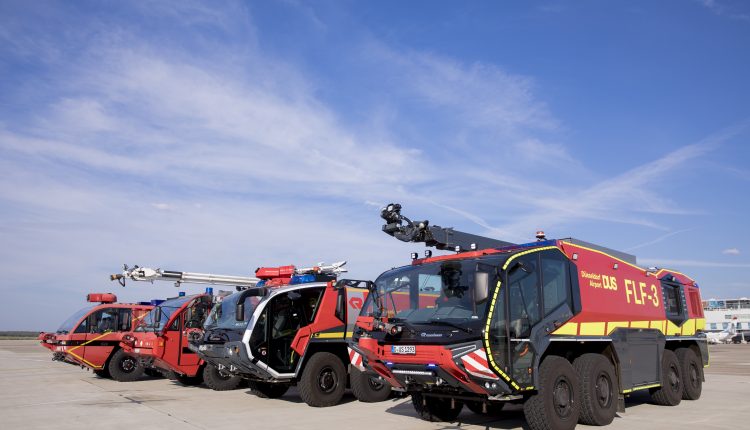 Each extinguishing group consists of three vehicles from Rosenbauer’s flagship: two PANTHER 8x8s fitted with a roof turret and a PANTHER 8×8 with an HRET. With their 1,450 hp twin engines, the approximately 50-ton vehicles can accelerate from 0 to 80 km/h in less than 22 seconds and are able to reach top speeds of over 130 km/h. These figures are necessary to meet the ICAO specification that requires vehicles to be able to reach any point of Dusseldorf’s two runways ready for operation within just three minutes.

Speed is Key
When needed, the entire extinguishing agent capacity can be loaded onto a vehicle in less than 90 seconds. This is ensured by the fully integrated high-performance extinguishing technology, incorporating precisely matched components. The built-in pump has a capacity of up to 10,000 l/min, the launcher achieves an extinguishing output of up to 6,000 l/min (RM65 on HRET) or up to 4,750 l/min (RM35C on the bumper). The FOAMATIC E foam proportioning system operates fully automatically after setting the proportioning ratio and is capable of foaming the pump’s entire water volume.  Extinguishing powder can be applied to the water jet by means of the integrated powder extinguishing technology.

Furthermore, the vehicles are equipped with hose reels for rapid extinguishing as well as self-protection nozzles in case spilled kerosene is ignited on the ground.

A special feature of the Dusseldorf ICAO extinguishing groups is the two new vehicles that Rosenbauer delivered at the beginning of February. These are the first PANTHER 8x8s in Germany to be fitted with environmentally friendly Euro 6 engines. They replace the vehicles originally delivered in 2003 and are equipped with the Rosenbauer STINGER HRET, which enables aircraft firefighting from almost any position, even from above. In addition, the vehicles are also equipped with modern CAFS systems that can be used to generate compressed air foam, which, due to its energy content allows excellent horizontal reaches and heights to be achieved, and which adheres very well to smooth and vertical surfaces (such as an aircraft’s outer skin) due to its homogeneous structure. 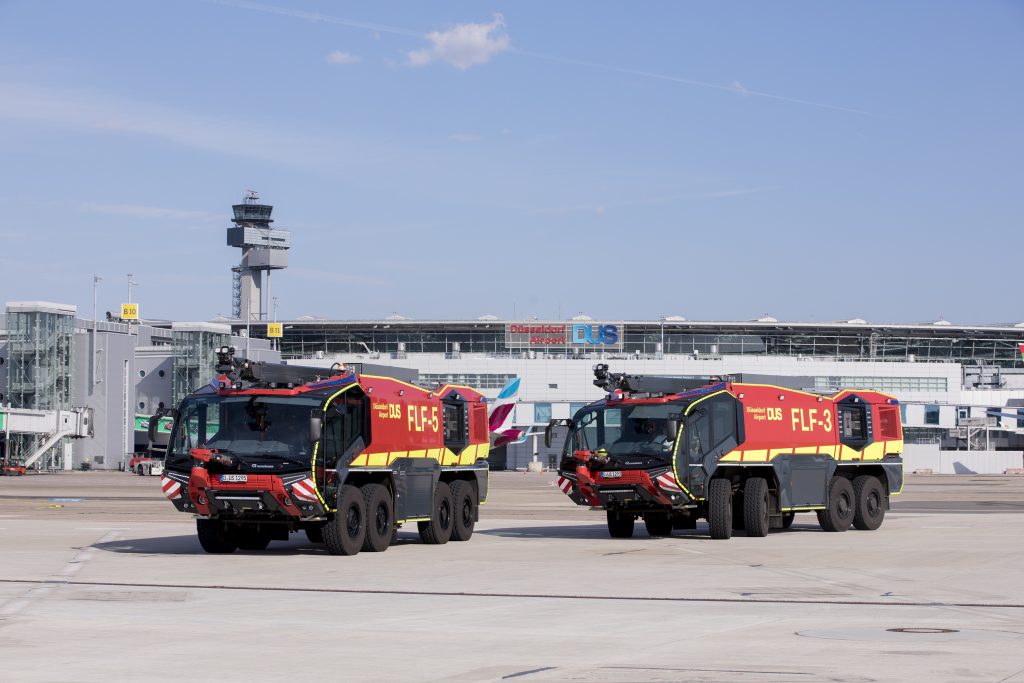 Everything from a Single Source
In addition to the six PANTHERs in service, the airport fire brigade has two additional Rosenbauer ARFFs in reserve, which are used for training purposes. In addition, a dedicated PANTHER simulator was purchased in October 2018 to train emergency crews. This is installed on a transportable container and offers a working area identical to that of the real thing. In the cockpit of the simulator, all aspects of a firefighting operation can be practiced, from the approach on the runway to the extinguishing assault on a burning aircraft, including evacuation scenarios and a wide variety of weather and visibility conditions.

Also in service since October 2018 is a Rosenbauer E5000 Escape Stair. This replaces an escape stair vehicle from 2003, is based on a low-entry chassis (low floor design), and allows the evacuation of passengers from extraction heights of between 2.5 and 5.5 m (measured to the lower edge of the door). The E5000 has an all-wheel drive chassis with high-performance actuation and is equipped with a water riser and rapid intervention system, which facilitate extinguishing operations.

This means that the complete aircraft fire protection system at Dusseldorf Airport is entirely based on Rosenbauer firefighting technology. The airport fire brigade also relies on Rosenbauer vehicles to protect the airport’s structures: two HLF 20s have been in operation since 2010, while another was put into service in January.

Dusseldorf Airport Short Portrait
Dusseldorf Airport is North Rhine-Westphalia’s gateway to the world and the largest airport of Germany’s most populous state. In 2017, a total of 24.64 million passengers were handled and 221,635 aircraft journeys were made.

The airport fire brigade is responsible for defensive fire protection, including technical assistance and rescue operations. It operates two fire stations, a fleet of more than 30 vehicles, and works around the clock with 37 employees (daily workforce).

Rosenbauer is an internationally active corporate group that is a dependable partner of the firefighting community all over the world. The company develops and produces vehicles, firefighting systems, fire & safety equipment and telematic solutions for professional, industrial and volunteer fire services, as well as installations for preventive fire protection. In more than 100 countries, Rosenbauer is the largest fire equipment provider in the world with revenues of about € 910 million and more than 3,600  employees (as at: December 31, 2018).

To this 2021 marked by distancing and limited social interaction, Spencer responds by…

Spencer Industrial District, in the heart of Italian Emergency and Rescue innovation