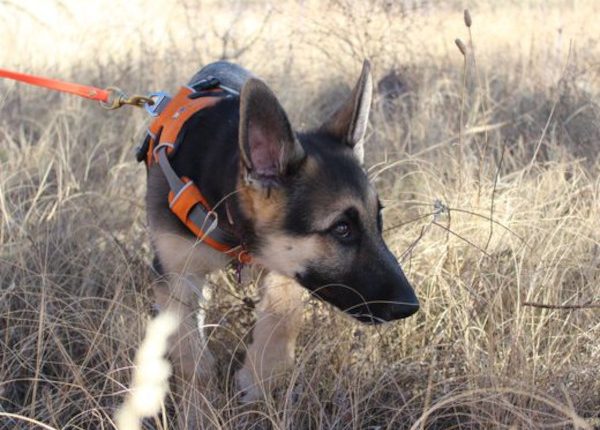 Rescue dog: a glimpse in the life of a search and rescue puppy

A little German shepherd is wandering around a field in search of something, or someone. Suddenly starts to run and reaches a tree, where a woman is waiting for him and rub his back erupting in cheers.

Her name is Wendy Nicastle and she is both trainer and owner of Max, a 10-week-old German shepherd puppy that is going to be soon a rescue dog. 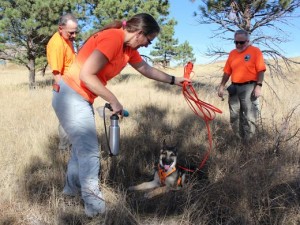 They are playing hide and seek through the grass of Lory State Park. She crouches on the ground, trying to hide and when Max gets here, she rewards him with cheers and with some good snack.

Apparently, it seems they are only playing, but it represents a fundamental exercise to become a good rescue dog.

If this Sunday’s exercise means just a game for Max, finding a person in the future could mean life or death.

Hide and seek game is the beginning of more than 2,000 hours of training. This is what makes a rescue dog.

Max is demonstrating to be a courageous and independent dog, exactly what Nicastle wanted. In particular, he turned out to be resourceful, for example, when he met a group of 10 search and rescue team members, he did not shy away from them. In fact, he introduced himself to each of them individually, which Nicastle considered as a big step for a puppy.

Why hide and seek game for a search and rescue dog puppy is so important? 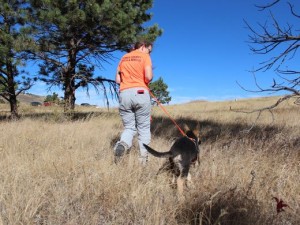 It is apparently a game, but the way the dog is treated, the rewards and the constant training will determine an important base for more complicated trainings.

The dog learns how to follow a track and in particular, which one to follow. The dog must learn to use his instinct correctly, without distract himself from the track he has to follow.

After the phase of hide and seek game, next training will consist in miles-long scent trails through the woods made by trainers, that he will track.

Nicastle does not train Max alone. Usually rescue dog trainer veterans Jake Udel and Dan Fanning — who have been with LCSAR (Larimer Country Search and Rescue) for 11 and 34 years, respectively — joined their Sunday train. Fanning brought his yellow Labrador, Tripp, who is already certified, as well as puppy-in-training Milo.

Abby, Udel’s dog, was one of the two LCSAR dogs who died earlier this summer. The loss of his dog has been difficult, he said:

“It’s definitely hard. But this has been my path for 10 years. This is the sort of thing, you don’t want to let it go fallow.”

LCSAR volunteers train their dogs at least once a week for years, so they can be always ready in case of emergency. Udel and Fanning helps Nicastle with Max’s exercises, made sure he drank water and lent Nicastle a mesh tarp she can use to keep her car cool when Max is inside.

“The way we operate is the more experienced folks help the less experienced folks bring their dogs along. We work collaboratively. We don’t have any way to pay somebody a lot of money and say, ‘Here, train my dog.’ ”

Even if, as Udel affirmes, dogs are used less frequently because of the cellphones pings, they still are a crucial component of LCSAR’s operations. In particular, Udel affirms:

“We’re not just out there to find a person,” Udel said. “We’re out there to clear an area and to find clues.”

Once Max is ready, he’ll take certification tests and begin joining Nicastle on rescue missions as a rescue dog.

Avalanche search and rescue dogs at work for rapid…