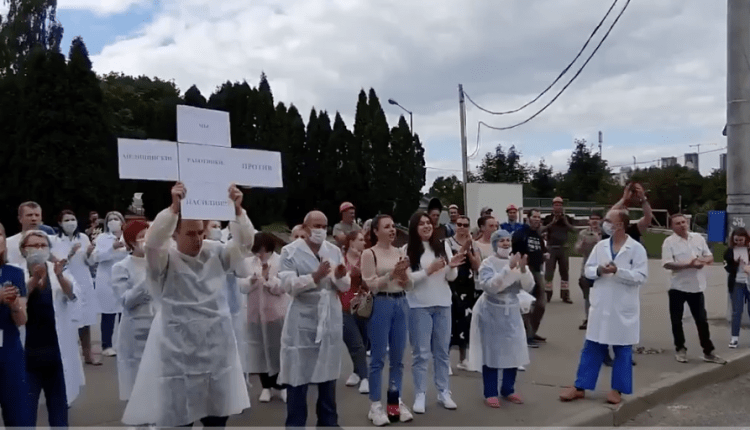 Belarus, hospitals and medics against the violence of the Government

Hospitals in Belarus are in war: all they do is receiving injured protesters from police officers during marches and peaceful sit-ins. They realized the wounds they treat are trauma and bruises, probably due to physical fights. Hospitals and medics are now protesting against this violence, which allegedly taken some to death.

Medics in Belarus hospitals treat wounds from rubber bullets, burns, fractures, trauma and bruises from beatings. There are also women and teenagers. Some have been beaten so badly in the street or in jail that they’ve been knocked unconscious or in a coma. A lot of them end up in ICUs.

What could happen to medics and nurses of the hospitals in Belarus?

Even medics and nurses get beaten up when they find themselves helping protesters outside hospitals. It’s a disaster: the international community must intervene”. Alexey Nosau is a doctor of Belarusian origin, who has been living in Spain for some years. He reported that the Deputy Minister of Health, Dmitri Pinevich, warned medics and paramedics that if they are caught taking part in anti-government marches, they will be fired.

Also today, a decree issued by the Ministry of Health has abolished the medical-legal reports: “It will no longer be possible to ask for an expert opinion on the state of health to be used in court, for example, to denounce the beatings suffered,” explains Nosau.

At the end of the presidential elections, health professionals have started to volunteer to help protesters injured in anti-government demonstrations throughout the former Soviet Republic. The grass-roots movement is challenging the fraud behind the sixth reappointment of President Aleksandr Lukashenko, who has been in office for 26 years.

The testimony of the healthcare community: medics in hospitals and on ambulances witnessed to a “strange” response

Nosau told again that the response of the authorities has been tough: “We calculate at least 2,000 injured and 34 dead,” citing provisional data collected by a collective of 4,500 medics, nurses, paramedics and ambulance drivers who are currently compiling a database on the violence suffered by the population, starting from data collected in hospitals.

“Our objective,” assures the doctor, in connection with Zoom from Spain, “is to obtain true figures of the repression, which deny the false data put into circulation by the authorities.

The media activists denounce that the official Belarusian press is ignoring the protests, strikes and various injustices carried out by the population, only relaunching the statements of the head of state and his ministers who have repeatedly denied the violence and torture against civilians and the thousands of protesters arrested. Only three have been confirmed dead to date.

Belarus and the violence of the fights: the challenge of medics and hospitals

The data collected by the collective “will serve to denounce Lukashenko and his government to the International Criminal Court for crimes against humanity,” warns Alexey Nosau, who appeals to the United Nations and the European Union, of which Minsk was not a member. “Look what is happening in the country: The World Health Organization (WHO) must also take note of the violence committed against healthcare workers while rescuing the injured in the streets, or believe government figures on the COVID-19 epidemic, which according to the local scientific community are much higher.

The very economic crisis triggered by the coronavirus – against which the authorities never implemented the lockdown – contributed to igniting the dissent. The special anti-riot units still denouncing the member of the collective, would even confiscate the ambulances. In addition to the threat to fire those who then participate in the citizens’ initiatives, “there are colleagues who complain about the police stealing medical records from computers. They are forced to photograph the screens in order to save this data,” reports the doctor.

Nosau concludes: “Despite this repressive climate, doctors and health care workers do not give up. They will continue to demonstrate until Lukashenko leaves the presidency. The EU must mediate the dialogue for a peaceful transition of power by involving government and opposition figures. The democratic future of the country is at stake.”

USA: many rural hospitals are closed each year - Communities…

Controversial experiment on COVID-19 vaccine: what are American labs working on?