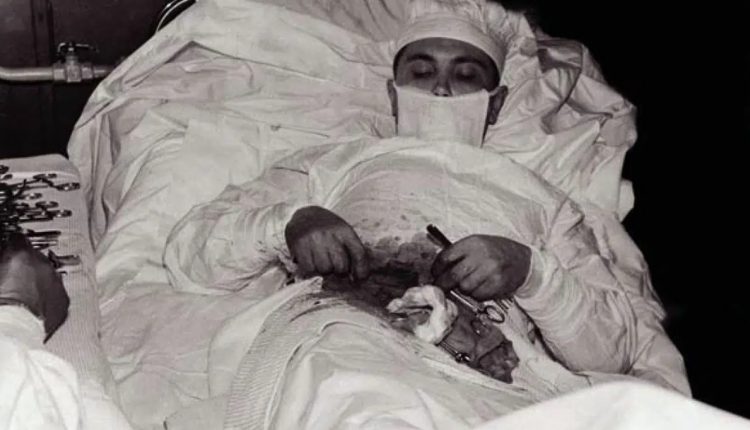 Leonid Ivanovich Rogozov, the surgeon who operated on his own appendix: in an old issue of the British Medical Journal, a very special story was reported some time ago, a beautiful true story: the extraordinary human and professional case of Dr Leonid Ivanovich Rogozov, a surgeon at a Soviet Antarctic base, who in 1961, during the polar winter, operated on his own appendectomy

Here’s how it happened, according to the article in the British scientific journal.

Rogozov was only 27 years old at the time and had embarked as the only doctor on the ship Ob, which in early December landed him, together with another small group of polar explorers, on the Antarctic coast Astrid Princess, with the task of setting up a new Soviet base.

The group worked hard and by February the new base, called Novolazarevskaya, was ready.

Just in time, because the terrible Antarctic winter was coming, with snowstorms, extreme frost and almost perpetual darkness, and the ship would not return until the following December.

The group was confined to a wild and inhospitable environment, completely isolated from the rest of the world.

THE SYMPTOMS THAT ROGOZOV BEGAN TO FEEL

In April, according to his diary, Rogozov began to feel ill.

Initially it was nausea, malaise and weakness, but then abdominal pain spreading to the lower right quadrant and a fever of 37.5 °C also appeared.

The diary of 29 April reads: ‘I seem to have appendicitis.

I keep appearing calm, even smiling.

Why frighten my friends? Who could help me?”

So the young surgeon decided to start medical treatment with antibiotics and local cold applications, but his condition soon worsened, with nausea and vomiting becoming more frequent and fever rising.

Soon, what loomed in his medical mind was the only solution to save his life before a perforation that he judged was almost certainly imminent: operate on himself.

PREPARING FOR THE OPERATION

Now they are starting to remove everything that is not needed from my room’.

Preparation for surgery begins, and it is obviously Rogozov himself who gives all the precise instructions on what to do

Meteorologist Alexandr Artemev, mechanic Zinovy Teplinsky and station director Vladislav Gerbovich wash themselves for the operation and put on autoclave-sterilised gowns and gloves: Artemev will be the ironman, Teplinsky will adjust the direction of the lamp and orient the mirror, Gerbovich will be ready to replace whichever of the other two should feel sick or faint. Rogozov also prepares some syringes already filled with drugs that will have to be injected into him should he lose consciousness.

The operation ends at 4 am, and the assistants, who have been on the verge of fainting several times, now clear the equipment.

Rogozov is exhausted and falls asleep with the help of a sleeping pill. The next morning his temperature is 38.1 °C. He continues antibiotic treatment.

After four days, his intestines start working again, and the following day his body temperature returns to normal.

Two weeks after the operation, and with the stitches removed, Rogozov returns to work.

He writes in his diary on 8 May, thinking about his state of mind during the operation: ‘I did not allow myself to think about anything other than the task in front of me. It was necessary to arm myself with courage and grit my teeth’.

Another year passed and on 29 May 1962, the ship finally picked up the group of explorers and brought them back to Leningrad (now St Petersburg), where Rogozov returned to work in the Department of General Surgery at the First Leningrad Medical Institute.

He died on 21 September 2000, thus almost forty years after his extraordinary appendectomy operation on himself.

Forty years of life that might not have existed without the courage and skill of that young surgeon. And it is good to know that Leonid Ivanovich Rogozov’s story was told in the BMJ at Christmas, with evident pride, by his son, Dr Vladislav Rogozov, who is now an anaesthetist in the Department of Anaesthetics at the Sheffield Teaching Hospital in Britain.

Appendicitis: What Causes It And How To Deal With It

Golden hour: 'One hour, just one hour, can change everything, forever'. Some info for the citizen