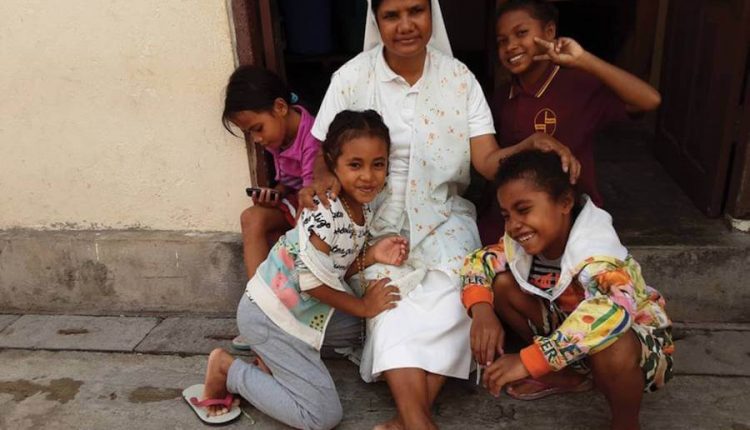 Timor Leste: a new infirmary for the orphanage in Laga. The idea of Sister Alma, nun and doctor

Timor Leste, an infirmary for the girls of Laga: a native of Lecco, a missionary nun, who is also a doctor, works in the orphanage and lives in the Southeast Asian country since 1992.

The orphanage of Laga welcomes over 100 girls and with their stories testifies the evolution of East Timor‘s society: if years ago it hosted mainly children of guerrillas, committed to “fight in the jungle for independence”, now it welcomes those who live new criticisms, with an increase in reports of cases of domestic violence. Sister Alma Castagna, a native of Lecco, responsible for Timor Leste of the Daughters of Mary Auxiliary (Figlie di Maria ausiliatrice), female order of the Salesians of Don Bosco, speaks about it and the new infirmary that is going to be realized.

In these 30 years, she has witnessed the last phase of Indonesian domination and the struggle for liberation, culminating in the 1999 referendum that officially sanctioned the independence of Timor, a small country located on the southern edge of the system of islands that make up Indonesia, about 600 kilometers north of Australia.

The interview takes place over the phone, while an infirmary is about to open in the orphanage in Laga, in the east of the country.

Timor Leste, an infirmary built by a doctor, who also is a nun means much more health and vaccination for the entire community

The project, supported by the Fondazione Opera Don Bosco Onlus in Milan, will serve above all “to guarantee the isolation of girls who present the first symptoms of illness”, explains Sister Alma.

A need that has existed since long before the COVID-19 emergency, which in Timor has so far registered only 27 confirmed infections.

“The hot and humid climate of Laga facilitates the onset of bronchitis and respiratory diseases,” says Sister Alma, stressing that another problem: “We often do not know the medical history of the girls who come here, we do not know if they have been vaccinated for some ailments, nothing.

In Laga today there are two facilities, which host 110 girls and girls aged between six and 17 years. A few steps from both, there are two schools.

Sister Alma says: “There are girls who have lost both parents or one of the two; often the girls who arrive in Laga are motherless. The missionary explains that “childbirth deaths are still widespread, also because of the persistence of traditional practices, such as giving birth at home, often in the absence of adequate hygiene conditions.

Often it is the grandparents who take care of the girls but, emphasizes Sister Alma, “they often do not have enough strength and resources and they send them to us to do the cycle of studies. According to the missionary, new factors are emerging that push the girls to seek shelter in the facility or to turn to social services. “Divorces are on the increase,” says Sister Alma, “and so are reports of cases of domestic violence.

An infirmary against tuberculosis, growing on the island of Timor Leste

A problem that has been affecting the island for years is that of tuberculosis. Sister Alma deals with it as a doctor and knows the situation: “In the 1990s a massive intervention supported by Caritas Norway had managed to improve the situation”, she recalls.

“After independence, however, the project passed into the hands of the Ministry of Health, there were less preparation and the management was not as effective.

According to Sister Alma, the end of Indonesian domination, which was also tainted by violence and abuse of power that led the United Nations to intervene, was a conquest.

Numerous, however, were the new problems.

“This is still very fragile democracy,” says the missionary, who denounces the “lack of political preparation of those in power today.

According to the missionary, “it could not be otherwise because Timor has suffered domination since the sixteenth century, starting with the Portuguese, so it is normal that it still lacks a strong structure.

According to Sister Alma, then, “there is a long way to go”.

COVID-19 in Timor Leste: a model of "best practice" to…

The power of women in Nigeria: in Jagawa poor women took up a collection and bought an ambulance

Squalene and coronavirus vaccine: will COVID-19 endanger lives of half a million sharks?