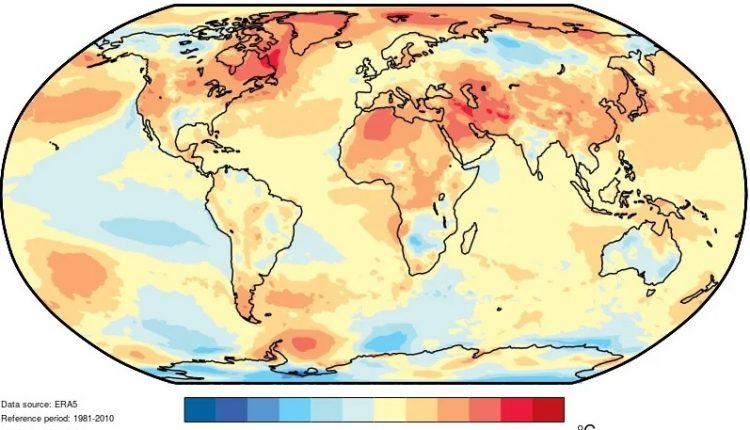 At Cop26 in Glasgow, the World Meteorological Organisation’s State of the Global Climate 2021 report was presented

Record concentrations of greenhouse gases in the atmosphere and associated heat build-up have pushed the planet “into uncharted territory, with far-reaching repercussions for current and future generations”.

At the current rate of increase in greenhouse gas concentrations, ‘by the end of this century we will see a temperature increase far beyond the Paris Agreement targets of +1.5 to +2 degrees above pre-industrial levels’, aiming to stay ‘well below’ +2 degrees.

Petteri Taalas (UN): Cop26 “is a decisive opportunity to get us back on track”

This is how Petteri Taalas, secretary general of the World Meteorological Organization-WMO, the United Nations’ meteorological agency, presented the State of the Global Climate 2021 report, published on the opening day of the climate conference in Glasgow.

The last seven years are very likely to be the seven warmest on record, the report explains.

A temporary ‘La Niña’ cooling event at the beginning of the year “could place 2021 as ‘only’ the fifth to seventh warmest year on record”, but this “does not negate or reverse the long-term trend of rising temperatures”.

Global sea-level rise “has accelerated since 2013 to a new high in 2021, along with continued ocean warming and ocean acidification”.

The State of the Global Climate 2021 is a report produced by several agencies with information and data collected up to the end of September 2021.

The State of the Global Climate 2021 also highlights socio-economic impacts, including those on food security, population movements and ecosystems.

The increase continued in 2021.

The global average temperature for 2021 (based on data collected from January to September) was about 1.09 degrees above the 1850-1900 average.

Currently, the six datasets used by the WMO in the analysis place 2021 as the sixth or seventh warmest year ever recorded globally.

Themes for COP26: Around 90 per cent of the Earth system’s heat is stored in the ocean

Ocean depths greater than 2,000 metres in 2019 continued to warm, reaching a new record high, but “a preliminary analysis based on seven global datasets suggests that 2020 may have surpassed that record”, the report notes.

All datasets, however, agree that “ocean warming rates show a particularly strong increase over the past two decades predicting that the ocean will continue to warm in the future”.

Much of the ocean, the State of the Global Climate 2021 continues, experienced at least one ‘strong’ marine heat wave in 2021, with the exception of the eastern equatorial Pacific Ocean (due to La Niña) and much of the Southern Ocean.

The Laptev and Beaufort Seas in the Arctic experienced ‘severe’ and ‘extreme’ marine heat waves from January to April 2021.

The issues for COP26: The ocean absorbs about 23% of annual anthropogenic CO2 emissions into the atmosphere and is therefore becoming increasingly acidic

“The pH of the open ocean surface has declined globally over the past 40 years and is now the lowest in at least 26,000 years,” the report warns, and current rates of pH change are “unprecedented at least since then”.

Moreover, when the ocean’s pH decreases, so does its ability to absorb CO2 from the atmosphere.

Global changes in mean sea level result mainly from ocean warming, due to the thermal expansion of seawater and the melting of land ice.

Measured since the early 1990s by high-precision altimeter satellites, “global mean sea level rise has been 2.1 millimetres per year between 1993 and 2002 and 4.4 mm per year between 2013 and 2021, an increase of a factor of 2 between the periods”, due “mainly to accelerated loss of ice mass from glaciers and ice sheets”.

As a result, sea ice extent across the Arctic was at an all-time low in the first half of July.

There was then a slowdown in melting in August, and the September minimum extent (after the summer season) was higher than in recent years at 4.72 million km2, the 12th lowest minimum ice extent in the satellite record for the past 43 years, well below the 1981-2010 average.

Sea ice extent in the East Greenland Sea was at a record low by a wide margin.

The extent of melting of the Greenland ice sheet was close to the long-term average in early summer, explains the State of the Global Climate 2021, “but in August 2021 temperatures and meltwater runoff were well above normal due to a strong incursion of warm, moist air in the middle of the month”.

On 14 August, rain was observed for several hours at Summit Station, the highest point of the Greenland ice sheet (3,216 metres), and the air temperature remained above freezing for about nine hours, ‘there are no previous reports of rain at Summit’.

This is the third time in the last nine years that melting conditions have occurred on the summit of the ice sheet; ice cores indicate that only one such melting event occurred in the 20th century.

“Extreme weather events are the new normal” and “there is growing scientific evidence that some of these bear the imprint of human-induced climate change”.

Petteri Taalas, secretary general of the World Meteorological Organisation, the meteorological agency of the United Nations, says this while presenting the State of the Global Climate 2021 report.

“Canadian glaciers have been melting rapidly.

A heat wave in Canada and adjacent parts of the United States has pushed temperatures up to almost 50 degrees in a village in British Columbia.

Death Valley, California, reached 54.4 degrees during one of multiple heat waves in the southwestern United States, while many parts of the Mediterranean recorded record temperatures. The exceptional heat has often been accompanied by devastating fires’.

At the same time, “months of rain fell within hours in China and parts of Europe suffered severe flooding, with dozens of casualties and billions in economic losses,” Taalas continued.

Exceptional heat waves hit western North America in June and July, recalls the State of the Global Climate 2021, with many areas exceeding station records by 4 to 6 degrees.

Hundreds of heat-related deaths, another topic for COP26

The town of Lytton, in south-central British Columbia, reached 49.6 degrees on 29 June, breaking the previous Canadian national record of 4.6 degrees, and was devastated by a fire the following day.

There were also several heat waves in the south-west of the USA.

Death Valley, California, reached 54.4 degrees on 9 July, equalling a similar value reached in 2020 as the highest level recorded in the world since at least the 1930s.

This was the hottest summer on record in the continental US.

There were also a number of large fires.

The Dixie Fire in northern California, which started on 13 July and burned about 390,000 hectares until 7 October, was the largest fire ever recorded in California.

On 11 August, an agro-meteorological station in Sicily reached 48.8 degrees, a provisional European record, while Kairouan (Tunisia) reached a record 50.3 degrees.

Montoro with 47.4 degrees set a national record for Spain on 14 August, while on the same day Madrid recorded its hottest day with 42.7 degrees.

On 20 July, Cizre set a Turkish national record with 49.1 degrees and Tbilisi recorded its hottest day in Georgia with 40.6 degrees.

Large fires occurred in many parts of the region, with Algeria, southern Turkey and Greece particularly affected.

In mid-February, abnormally cold conditions affected many parts of the central United States and northern Mexico.

The most severe impacts occurred in Texas, which generally recorded its lowest temperatures since at least 1989. An abnormally cold spring phase affected many parts of Europe in early April.

On the rainfall front, the State of the Global Climate 2021 reports, extreme rainfall hit China’s Henan province from 17 to 21 July.

In the city of Zhengzhou on 20 July, 201.9 millimetres of rain fell in one hour (a Chinese national record), 382 mm in six hours and 720 mm for the event as a whole: this is more than the annual average.

Flash floods have been linked to more than 302 deaths, with reported economic losses of $17.7 billion.

Western Europe suffered some of the most severe flooding on record in mid-July: a theme for COP26 in Glasgow

Over western Germany and eastern Belgium on 14 and 15 July, 100 to 150 mm of rain fell over a wide area and on already saturated ground, causing flooding, landslides and over 200 deaths.

The highest daily rainfall was 162.4 mm in Wipperfürth-Gardenau (Germany).

In the first half of the year, persistent above-average rainfall occurred in parts of northern South America, particularly in the northern Amazon basin, causing significant and long-lasting flooding in the region.

The Rio Negro in Manaus (Brazil) reached its highest level ever recorded.

In contrast, for the second year in a row, significant drought affected much of subtropical South America.

Rainfall was well below average over much of southern Brazil, Paraguay, Uruguay and northern Argentina.

The drought led to significant agricultural losses, aggravated by an unexpected spell of low temperatures in late July that damaged many of Brazil’s coffee growing regions.

The twenty months from January 2020 to August 2021 were the driest on record for the southwestern United States, more than 10% wetter than the previous record.

A malnutrition crisis associated with the drought affected parts of Madagascar.

The Body Of The Woman Missing In The Area Of Catania Has Been Found, The Third Victim Of The Bad Weather In Sicily