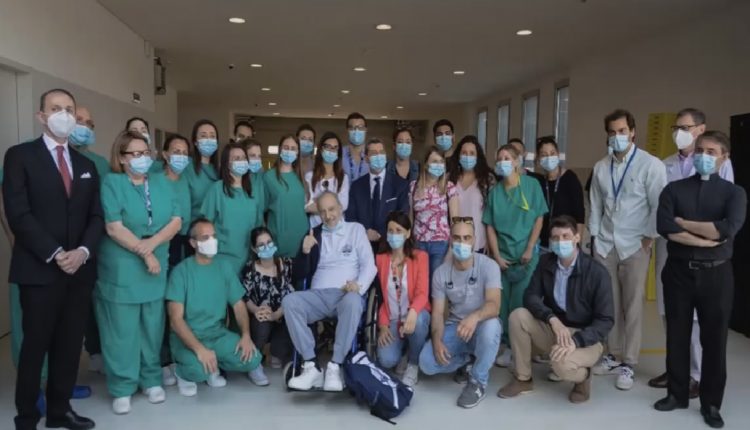 A very suggestive and important case report of a COVID-19 patient who has been literally ‘resurrected’. The intervention was almost impossible, but the following case report will show step by step how physicians faced it and saved this 61-year-old man life.

The experiences in intensive care units (ICUs), in the anaesthesia departments and resuscitation wards, were part of the harsh chess play with death. It involved thousands of human beings: patients, doctors, nurses, healthcare assistants, first responders and also, family members.

An experience that none of them, most likely, will ever forget.

COVID-19 was also an incredible journey into the experimental clinic. While facing an unknown virus, medical staff were forced to think about new solutions to unexpected and serious anamnestic results.

The treatment for COVID-19 patients: a suggestive case report

Professor Agrò exposed a particularly useful case report on a COVID-19 patient. It was not only about the ‘resurrection path’ – we literally used ‘resurrection’ instead of ‘resuscitation’, l and there is a reason! – of a 61-year-old man from Bergamo, but also about the atypical clinical picture of a COVID patient from the one expected for an ARDS (Acute respiratory distress syndrome) IV stage.

A final point of reflection concerns the association between the evolution of the viral picture and overexposure to bacterial infections.

Therefore, it becomes interesting in terms of clinical documentation for those colleagues who, in Italy and in the rest of the world, may have to face a similar case. Our hope is that the medical-scientific Congress with COVID-19 topic that we had the honor to host has facilitated this virtuous process.

“This patient from Bergamo – said Prof Agrò – represents a common category of COVID-19 patients: negative to swabs but probably positive to CT scan. Indeed, people who were almost dying were negative on the swab.”

ANAMNESIS:
On 22, March the patient, 61 years old, was admitted to the Giovanni XXIII Hospital in Bergamo for fever, cough and dyspnea that had been on the rise for three days.

Although the (3) swabs were negative, there remained a high clinical suspicion for COVID-19, since the patient was presenting the symptoms for a week already: a therapy with hydroxychloroquine, rezolsta (darunavir, cobicistat) and covering antibiotic was started.

March, 31: the patient worsens significantly, with a P/F < 100 (precisely 88) in NIV with FiO2 0.9%, then from non-invasive ventilation goes directly to orotracheal intubation, transferring him to UTI and to invasive mechanical ventilation.

Prof Agrò continues, “the 3 negative molecular tests also had an impact, when the Civil Protection contacted me, for taking charge of the patient. Germany was not going to admit him in its hospitals, while the molecular tests were negative, just as they did not admit him in no-COVID intensive care because the CT scan was positive.

Since the uncertainty was about who was going to treat him, I gave the availability at the Campus COVID Center in Rome. So, 23 days after the onset of the first symptoms, he was transferred by helicopter to Rome.

On April 5th at 00.40, the patient arrived in very critical condition. He was intubated and ventilated, with a body temperature of 39°.”

It was immediately subjected to a lung scan. It had diffuse B lines even coalescent on the upper fields, lower consolidation, thickened pleura with subpleural infiltrates and LUS score of 28 (14+14).

The chest CT scan performed on arrival showed severe bilateral multifocal interstitial-alveolar multifocal pneumonia with a frosted, consolidating glass appearance. In addition, there was occlusion of the right bronchus.

On April 5, 2020, we started the 1st cycle of pronation in protective mechanical ventilation, after performing arterial hemogasanalysis.

We found that when he performed the pronation, the patient improved but it was understandable. Immediately afterwards he returned as before or worse than before.

Post supination control showed worsening of respiratory exchange and P/F (108). P/F is an index of hypoxemia severity and our patient always ranked around or below 100, with severe or very severe hypoxemia.

In the ventilatory mode adopted, we naturally had sedation, continuous infusion curarization, volume-controlled ventilatory mode, and we found parameters that were not what we should have found for a no-COVID stage IV ARDS patient.

We observed that when the Ph dropped below 7.25 and the PaCO2 rose above 55mmHg, we increased the Respiratory Frequency never exceeding the limit of 32 acts per minute. Of course, volume-controlled ventilation helped us to monitor plateau pressure and driving pressure.

We performed the first five pronation cycles 12-16 h/day, with neuromuscular blockers in a continuous infusion, always titrating the PEEP respecting the plateau pressure and driving pressure limits and with alveolar recruitment models with scale model.

Of course, we have never disconnected the pulmonary ventilator, to avoid PEEP and ateletaxis losses. We have also performed tracheal aspiration of closed-loop secretions to avoid droplets.

We performed standard monitoring, and in the days following the protective ventilation with the best PEEP helped us but did not improve the patient.

Treatment of the patient with Coronavirus: the most delicate phase, the most difficult moments

On 9 and 10 April 2020, we then administered two doses of Tocilizumab 800 mmgr intravenously for two, and on 10 April we performed a tracheostomy according to Griggs. The next day, April 11, we noticed signs of bacterial overinfection, which were confirmed by cultural tests.

On April 12, a worsening of the LUS ultrasound picture was evident with a score that had increased from 28 to 31. In the chest CT scan performed on the same day, we noticed an extension of parenchymal consolidations at the level of both lower lobes, an increase in parenchymal density and frosted glass alterations in both middle lobes.

On the 14th of April, at the aspirated needle, we found positivity for Acinetobacter Baumanii: we then started targeted antibiotic therapy and continuous protective ventilation with low current volumes. We also set the therapy with Meropenem 1 gram X 4 and Colistin in the bolus of 9 million and then 4.5 million X 2.

Two days later, on April 16, we detected a positive KPC, Klebsiella Pneumoniae, in the trachea aspirate, so we added 2.5 grams X3 to the ZAVICEFTA therapy.

As you may have noticed, a very important bacterial overinfection is superimposed on a challenging viral infection. In weaning attempts, on April 18, we still had problems.

Patient COVID-19, when the case report starts narrating a ‘resurrection’

On the 19th of April, the patient woke up with delirium. So, we start administer DEXDOR in therapy and assisted ventilation in BiPAP, PS (Pressure support) of 16 and a PEEP of 8, FiO2 50%.

Respiratory exchanges improved, compared to the beginning, with P/F equal to 260. The chest CT scan performed 8 days after the previous one, on April 20, showed a bilateral densitometric reduction of the parenchymal consolidation areas located in the upper lobes.

The right pleural effusion was also resolved, while a small amount of effusion remains in the left lung.

In the following days, considering the improvement, we tried a spontaneous breath supported through cannula for tracheostomy in PSV mode.

This case report on COVID-19 patient ends with his discharge from the clinic. On April 25th, after sitting at the end of the bed for about an hour and then supine again, a spontaneous breathing cycle in O2 therapy with hake was started.

In the following days, we tried new weaning until we obtained, in spontaneous breath supported in PSV through tracheostomic cannula, a 100% SpO2, with a P/F of 388.

Finally, the patient was breathing spontaneously, supported by tracheostomic cannula, and we even reached a P/F of 423.

The CT scan performed on the 27th of April, we observed a clear reduction in the areas of pulmonary consolidation at the level of both lower lobes, the same in the upper lobes, and we also noted a bilateral densitometric reduction in the middle lobes.

The chest CT scan, therefore, shows a volumetric and densitometric decrease in lung lesions, with the absence of bilaterally and pericardially pleural effusion, as well as patency of the main airways.

On April 28th the patient breathes spontaneously, always supported in PSV, and exhibits excellent respiratory exchange, with P/F, which is always related to bronchial secretions (therefore it gets worse when the patient has to be aspirated), equal to 388.

Respiratory exchanges with tracheal filter O2 bring the P/F from 360 to 420, all haematochemical tests are within the norm and the ferritin is 1600 ng/ml. In the chest CT scan of May 7, so 10 days after the previous one, there are no documented bilaterally filling defects, to be referred to pulmonary embolism.

In the apical region, a marked improvement of lung consolidations is observed in the anterolateral and posterior regions of the right upper lobe and in the posterior part of the left upper lobe.

Clear improvements were also seen in the middle and lower lobes. One week later, the patient was transported back to Bergamo”.

The professor then broadcasted a beautiful video about HEMS transport by helicopter.

Listening to his words, observing the flow of his slides, studded with defeats and (final) victories, and looking at the exciting images of this video, our minds go to the unbelievable words uttered by those who sometimes claim “don’t know anyone who entered intensive care units”.

Actually, patients in intensive care units suffered unimaginable pain, and those who have come out alive owe it to the self-sacrifice and professionalism of skilled doctors and nurses, determined to save their lives. Doctors like Professor Felice Eugenio Agrò, to whom, the whole of Italy owes gratitude and memory.