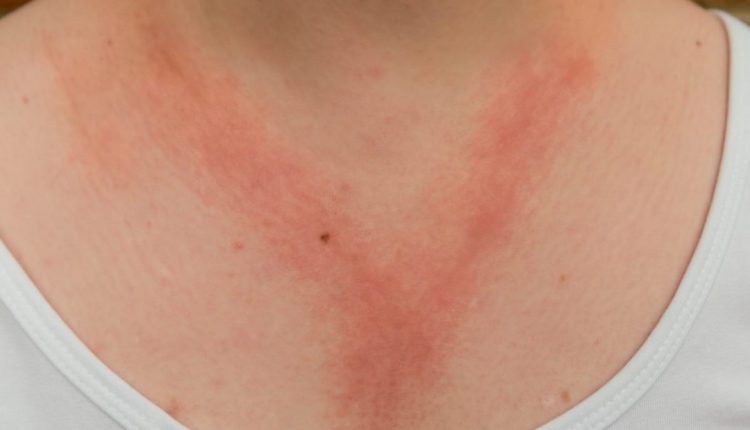 Atopic or allergic contact dermatitis? In both cases, we are talking about rather common skin inflammations that can easily be confused by patients, particularly because of their rather similar symptoms

While in the case of allergic contact dermatitis it is sufficient to avoid the allergens that caused it, atopic dermatitis can become chronic, negatively affecting the quality of life of those affected.

What are the symptoms of atopic dermatitis?

Atopic dermatitis, also known as constitutional eczema, is a relapsing or chronic inflammation of the skin.

It most often manifests itself in early childhood with the appearance of itchy, reddened patches, often topped with small blisters, which with time flake off or form scabs.

In children, the cheeks, neck and extensor surfaces of the arms and legs are affected.

It is a disorder that has a significant impact on the patient’s daily life, particularly because of the itching, which can be very intense, and which during the day makes it difficult to concentrate properly on daily activities and prevents restful sleep at night.

It is a widespread disease also among adults (about 10% of the population), in which itchy lesions are typically localised, in addition to the face and neck, to the antecubital fossae (the “folds” of the elbows), the popliteal cords (behind the knees) and the back of the hands.

There are no specific tests to diagnose the atopic form.

The diagnosis is exclusively clinical, i.e. made on the basis of the information the dermatologist obtains from the patient and the signs he observes on the skin.

The signs and symptoms of atopic dermatitis are very similar to those of allergic contact dermatitis, which is why the two conditions can easily be confused by the sufferer.

Allergic contact dermatitis also manifests itself in the form of itchy red patches covered with vesicles, with a scaling effect.

How to recognise it? In order to clear up any doubts and set up the correct treatment, it is therefore important to refer exclusively to the dermatologist, who during the examination will collect the relevant information from the person concerned and observe the signs on the skin in order to make a specific diagnosis of the dermatitis.

The causes of atopic dermatitis

The causes of atopic dermatitis are different from those of allergic contact dermatitis.

Atopic dermatitis is in fact closely related to hereditary components that determine a reduced capacity of the epidermis to perform its function as a “barrier” against external agents and that probably predispose the patient to food and respiratory allergies during his or her life.

It is important to note, however, that very rarely does the introduction of food or respiratory allergens cause a flare-up of atopic dermatitis, which can recur in a seemingly unpredictable manner.

In other words, we can think of the atopic form as the skin disorder of allergic people.

The allergic contact form, on the other hand, as its name implies, is associated with a reaction of the skin following repeated contact with certain allergens that stimulate its immunological response and the formation of the itchy patches that characterise it, starting in the areas where contact occurs.

Every part of the body can potentially be involved in allergic contact dermatitis, depending on the type of allergen.

For example, the scalp for hair dye, the palms of the hands and earlobes for nickel, etc.

The substances that cause allergic contact dermatitis can be both natural and chemical, the most common being those contained in flower and plant essences, metals and artificial preservatives and dyes.

However, it is not uncommon for some patients with atopic dermatitis to have a concomitant allergic contact dermatitis due to their propensity to develop allergies.

If this is not identified, it can complicate the course of the atopic dermatitis, making it apparently more resistant to therapy.

The first step, in all cases in which allergic contact dermatitis is suspected, is to identify the allergen using appropriate allergy tests (patch tests or epicutaneous tests).

The dermatologist then correlates the result of the patch test with the clinical information of the individual patient to establish a cause-and-effect relationship between contact with the allergen and the dermatitis.

Consequently, the treatment of the contact allergy form is to eliminate all contact with the allergen in question and, of course, immediately to relieve the inflammation with a corticosteroid cream.

How is dermatitis treated?

For both types of dermatitis, the first piece of advice is to use moisturising and emollient products, perhaps applied after a quick shower using detergents without surfactants.

Soaps and foaming detergents should be avoided, as they contribute to irritating the skin.

To control the disease, on the other hand, in the case of atopic dermatitis, in its mild forms, there is a tendency to use topical corticosteroids and immunomodulators (calcineurin inhibitors).

Antihistamines, to be taken orally, can help break the vicious circle of itching, which on the one hand contributes, through scratching, to the chronicity and infection of the lesions of atopic dermatitis, and on the other hand negatively affects the quality of life and sleep.

When atopic dermatitis involves larger areas, with intense itching, and if the measures already taken are not sufficient, phototherapy and possibly systemic immunosuppressants such as cyclosporine can be used.

If this therapy does not produce the desired results and the patient suffers repeated relapses, it may be necessary to use monoclonal antibodies (dupilumab), administered subcutaneously, which, compared to conventional immunosuppressants, allow atopic dermatitis to be controlled in the longer term because they have fewer side effects.

New therapeutic options on the horizon, for an increasingly “tailor-made” management of the individual patient with atopic dermatitis, include both oral drugs (JAK inhibitors) and monoclonal antibodies (tralokinumab).

Dermatological Examination For Checking Moles: When To Do It

Deviation of the septum: how to treat nasal obstruction?