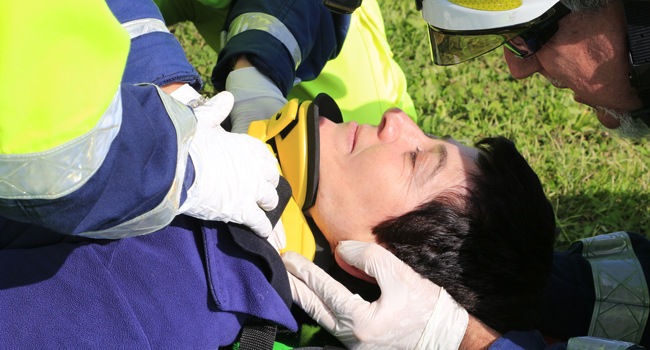 Cervical collars are applied to blunt trauma patients all the time. And most of the time, the neck is fine. It’s just those few patients that have a fracture or ligamentous injury that really need it.

I’ve previously written about how good some of the various types of immobilization are at limiting movement. But what happens when you are actually putting them on or taking them off? Could there be dangerous amounts of movement then?

Several orthopaedics departments studied this issue using an electromagnetic motion detector on “fresh, lightly embalmed cadavers” (!) to determine how much movement occurred when applying and removing 1- and 2-piece collars.

Specifically, they used an Aspen 2-piece collar, and an Ambu 1-piece. They were able to measure flexion/extension, rotation and lateral bending.

Here are the factoids:

Movement in any plane is less than 3-4 degrees with either a 1-piece or 2-piece collar. This is probably not clinically significant at all.

Just look at my related post below, which showed that once your patient is in the rigid collar, they can still flex (8 degrees), rotate (2 degrees) and move laterally (18 degrees) quite a bit! So be careful when using any collar, but don’t worry about doing damage if you use it correctly.

Medical devices review: How to maintain warranty on your…