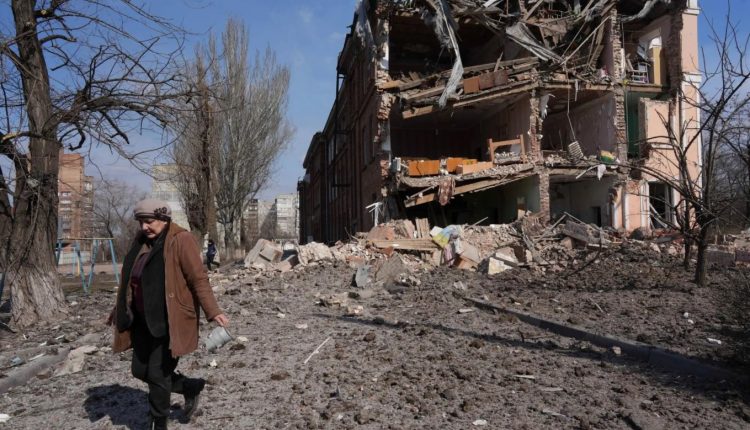 Bombs over Mariupol, the dramatic testimony of Sasha (MSF) / VIDEO

Sasha, a long-time staff member of Médecins Sans Frontières (MSF) from Mariupol, Ukraine, describes life in the city as it was encircled and bombarded by Russian forces

For security reasons, he is using only his first name

I studied and worked and had a good time in Mariupol.  And when MSF hired me, I was happy to do meaningful work too. Life was good in Mariupol

But suddenly it became real hell.

At first, none of us could believe what was happening, because in our times, this sort of thing just shouldn’t happen.

We thought it was just talk on TV and that someone would stop this madness from happening.

When I realised that it was actually becoming real, I felt sick – so sick that I couldn’t eat for three days.

In the beginning, things almost seemed more or less normal, even though we knew that nothing really was normal anymore.

But then the bombings started and the world we had known existed no more.

Our lives became weaved between the bombs and missiles falling from the sky, destroying everything.

The days of the week stopped to have any meaning, I couldn’t tell whether it was Friday or Saturday, it was all just one long nightmare.

My sister tried to keep count of the days, but for me it was all a blur.

In the first few days, we fortunately managed to donate some of MSF’s remaining medical supplies to an emergency department in Mariupol

But when the electricity and phone network went down, we couldn’t contact our colleagues anymore and we couldn’t carry out any work.

The bombing started and became worse each day.

Our days then consisted of trying to stay alive and trying to find a way out.

How can one describe one’s home becoming a place of terror?

There were new cemeteries all over town, in almost all neighbourhoods.

Even in the little yard of the kindergarten near my house, where children should be playing.

How can this past ever bring a future for our children?

How can we take more pain and sadness?

Sasha (MSF): In Mariupol, I was moved to see so many people helping others, with everyone seeming to always worry for someone else and never for themselves

Her fitness watch showed 180 heart beats per minute and I was so worried to see her like this.

I told her it would be stupid if she were to die from fear in the midst of all this!

With time, she adapted more and instead of freezing with fear during the shelling, she told me about all the different hiding places she could think of.

I was still extremely worried about her and it was clear that I needed to get her out of there.

We moved three times, to find the most secure place.

We were lucky, as we ended up staying with an amazing group of people that I now consider my family.

History has already proven that humankind survives when staying together and helping each other.

I was also moved to see how brave people were, or how brave they had to be.

I remember one family cooking in the street outside their home.

Just a few metres from their fire were two big holes in the ground from shells which had struck another family just a few days before.

I was touched to see how people cling to life and what is good.

On International Women’s Day on 8 March, we decided to celebrate it despite everything.

We rang the neighbours and they invited their friends.

Someone found one bottle of champagne and someone even made a cake with only half the ingredients of the recipe available.

We even managed to put on a few minutes of music.

For half an hour, we really felt the celebration and it felt good to be happy and laugh again.

We even joked that this nightmare would end.

But it continued and it seemed like it would never stop

We tried to leave every day but there were so many rumours about what was happening and what was not, we started to think it would never happen.

One day, we heard that a convoy was going leave and we scrambled into my old car and rushed to find the departure point.

We told as many people as we could, but now I am filled with sadness when I think of the ones I couldn’t tell.

It all went so fast and we couldn’t call anyone because there was no phone network.

The departure was a giant mess and panic with lots of cars going in all sorts of directions.

We saw a car that had so many people in it that it was impossible to count them, their faces were pushed to the window screens.

I don’t know how they made it out, but I hope they did.

Sasha (MSF): We had no map and we worried we would take the wrong direction, but somehow, we chose the right one and we made it out of Mariupol

It was only as we tried to leave Mariupol that I realised things were actually worse than I originally thought.

It turns out I was lucky to shelter in part of the city that was relatively spared, but on the way out I saw so much destruction and sorrow.

We are safe for now, but we don’t know what the future will hold. When I finally got access to the internet, I was shocked to see pictures of my beloved city in flames and my fellow citizens under rubble.

In the news, I read about the shelling of Mariupol theatre, where many families with children had sought shelter and I just I can’t find the words to describe how that made me feel. I can only question why.

The people who are together will have a better chance to survive, but there are so many who are on their own.

The ones that are old and frail cannot walk for kilometres to find water and food. How will they make it?

We had no choice but to leave so many loved ones behind.

The thought of them and all the others still there is hard to bear.

My heart aches with worry for my family.

I tried to go back in to bring them out, but I failed to do so.

Now I have no news from them.

I can’t stop thinking of an old lady we met in the street two weeks ago.

She was not walking well and her glasses were broken, so she couldn’t see much either.

She pulled out a small mobile phone and asked if we could charge it for her.

I tried to do it on my car battery, but I didn’t succeed.

I told her that the phone network was down and that she would not be able to call anyone even if she had battery.

“I know I will not be able to call anyone,” she said.

“But perhaps one day someone will want to call me.”

I realised that she was on her own and that all her hopes were hanging on the phone.

Maybe someone is trying to call her.

Maybe my family is trying to call me. We do not know.

It’s almost one month since this nightmare began and the situation gets worse every day.

People in Mariupol die each day because of shelling, bombing and due to the lack of all basic needs – food, water, healthcare.

Innocent civilians struggle through unbearable conditions and hardships every day, every hour and every minute.

Just a small part of them have managed to escape, but a huge number are still there, hiding in destroyed buildings or in basements of ruined houses without any type of support from outside.

Why does all this still happen to innocent people?

To what extent will humanity let this disaster continue?

Watch the MSF video on Mariupol:

MSF: Accessing Areas Most Affected By Fighting In Ukraine

Ukraine, Italian Doctors On The Occupation Of Mariupol Hospital: ‘Honour The Geneva Conventions, Europe And The UN Must Intervene

The tissue that isn't there: coloboma, a rare eye defect that impairs a child's vision

First aid: what to do after swallowing or spilling bleach on your skin