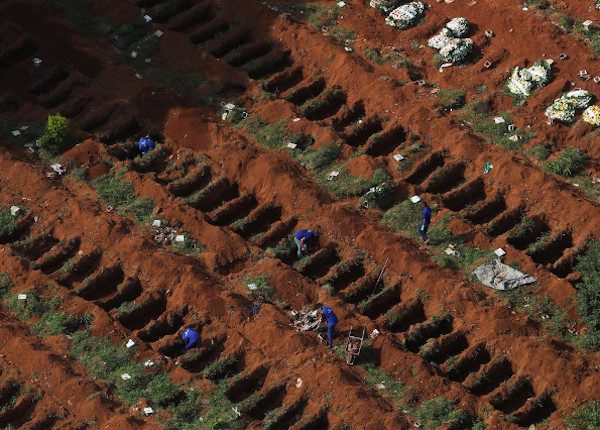 COVID-19 touched also Brazil but, differently than in other countries, here the quarantine doesn’t exist. President Jair Bolsonaro joined hundreds of demonstrators protesting stay-at-home orders issued by state governors. Then, the Brazil Health Minister has been fired and every region is digging their own mass graves to host coronavirus victims.

The scenario of coronavirus response is not so positive. COVID-19 is spreading at a very high speed in Brazil, like in other countries. However, it seems that President Bolsonaro is not so worried about that.

Bolsonaro on COVID-19: Brazil does not need quarantine

On 19th April, Bolsonaro joined around 600 demonstrators in the capital Brasilia protesting stay-at-home orders issued by state governors. The states of Sao Paulo and Rio de Janeiro, the most populated ones, already declared to follow partial quarantine for their inhabitants.

The CNN reports that President Bolsonaro has been pushing against strict restrictions. However, states and local governments in some of Brazil’s hardest-hit areas have closed schools and many activities. Firefighters and police in the streets intimate people to stay indoors. The nation seems torn apart.

Coronavirus, Bolsonaro fired his Minister of Health. He intimated Brazil to stay home

After weeks of clashed over social distancing and self-isolation, President Bolsonaro fired his health minister Luiz Henrique Mandetta. During a conference to introduce his new minister, he assured that businesses need to be reopened to support the economics of Brazil. He allegedly transpired that the virus is not so important now. However, show that a majority of Brazilians support social isolation.

In the meanwhile, cities in Brazil are digging mass graves for COVID-19 victims

The realities which concern the most are the Brazilian favelas, where there is a high lack of hygiene and where poverty is most concentrated. Many favelas inhabitants try to protect themselves by producing homemade face masks. This is the case of Paraisòpolis, the second biggest favelas in Sao Paulo (Brazil). It counts more than 100,000 inhabitants.

“Here the numbers are increasing” – affirms from Manaus don Roberto Bovolenta, a missionary priest of Fidei Donum -. COVID-19 is spreading also among the native communities of Amazonia, which are more vulnerable because of the lack of facilities. “There have been endless controversies over the 400-seat hospital wanted by the governor, which has been closed for a long time, and for the country medical facilities, wanted by the mayor”.

In Manaus, near to the Tarumá graveyard, the largest and most popular in Manaus, they are preparing a mass grave for coronavirus victims. The mayor cancelled all events until the end of June, a period in which very popular and traditional popular festivals are held.

How can the Power Air Purifying Respirator designed by the University of Utah help against COVID-19?