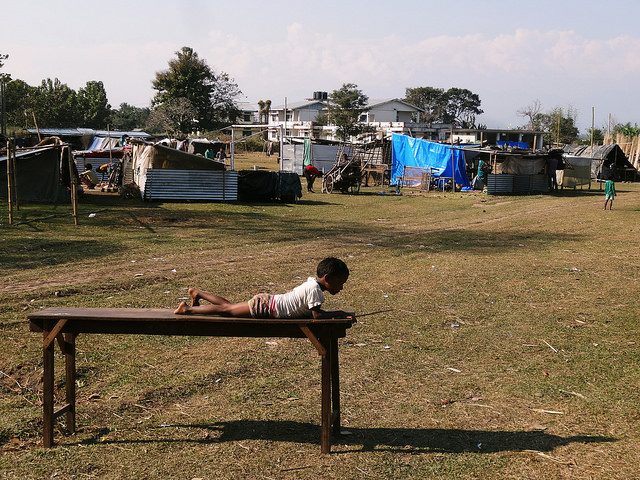 The under-payment or non-payment of aid has affected mostly civilians in war-torn areas such as Syria and Yemen, as well as survivors of the Nepal and Haiti earthquakes and Ebola outbreak.

UNITED NATIONS, Jul 13 2015 (IPS) – When international donors pledge millions of dollars either for post-conflict reconstruction or for humanitarian aid, deliveries are rarely on schedule: they are either late, fall far below expectations or not delivered at all.

The under-payment or non-payment of promised aid has affected mostly civilian victims, including war-ravaged women and children in military hotspots such as Gaza, Lebanon, Syria, and most recently Yemen.

But it also extends to earthquake-struck countries such as Haiti and Nepal, and at least three African countries devastated by the Ebola virus.

At an international Ebola recovery conference at the United Nations last week, the governments of Liberia, Sierra Leone and Guinea requested more than 3.2 billion dollars in humanitarian aid to meet their recovery plan budgets. And donors readily pledged to meet the request.

But how much of this will be delivered and when?

At a question and answer press stakeout, Matthew Russell Lee, the hard-driving investigative reporter for Inner City Press (ICP), asked Helen Clark, the Administrator of U.N. Development Programme (UNDP), what steps are being taken to ensure that the announced pledges are in fact paid.

According to Lee, she said UNDP will be contacting the pledgers.

“But will they go public with the non-payers?” he asked, in his blog posting.

Lee told IPS that even amid the troubling lack of follow-through on previous pledges in Haiti, Lebanon, Gaza and Yemen, “it does not seem the UNDP has in place any mechanism for reporting on compliance with the Ebola pledges” announced last week.

“If the U.N. system is going to announce such pledges, they should follow up on them,” he said.

On Yemen, he pointed out, while the Saudi-led coalition has been bombing the country, it seems strange to so profusely praise them for a (conditional) aid pledge, especially but not only one that has yet to be paid.

Gregory Adams, Director of Aid Effectiveness at Oxfam International, which has been closely monitoring aid pledges, told IPS that in advance of the Ebola Recovery Conference held last week, Oxfam looked at three past crises to see how well donors followed through on recovery pledges.

“We found that on average, donors deliver less than half of what they pledged (47 percent). But, even that percentage might overstate the amount that actually arrives in recovering countries,” he said.

For example, in Busan, South Korea in 2011, donors pledged they would be publishing timely, accessible and detailed data on where their aid is going by the end of 2015.

But many donors still don’t publish complete information; information is only available for slightly more than half of overall ODA (Official Development Assistance).

As a consequence, said Adams, once aid reaches a recovery country, it is difficult to know exactly how much actually gets where it is most needed.

This lack of transparency makes it hard for communities to participate in planning and recovery efforts, and to hold donors, governments and service providers accountable for results, he noted.

One of the most important lessons of Ebola was that response and recovery efforts must be centered on community needs and incorporate their feedback, Adams said.

“If people do not know where aid is going, they can’t plan, they can’t provide feedback, and they can’t make sure that aid is working,” he declared.

Even Secretary-General Ban Ki-moon made a special appeal to donors last December when he announced 10 billion dollars in pledges as initial capitalisation for the hefty 100 billion dollar Green Climate Fund (GCF).

Announcing the pledges, he called on “all countries to deliver on their pledges as soon as possible and for more governments to contribute to climate finance.”

Last April, Saudi Arabia announced a 274-million-dollar donation “for humanitarian operations in Yemen” – despite widespread accusations of civilian bombings and violations of international humanitarian law in the ongoing conflict there.

Responding to repeated questions at U.N. press briefings, U.N. spokesperson Stephane Dujarric told reporters last week: “I think it’s right now in the Memorandum of Understanding (MoU) phase between the Saudis and the various U.N. agencies to which the money will be allocated. That process is ongoing. We hope it concludes soon. But those discussions are ongoing.”

He said a lot of the larger donors have standing MOUs with the U.N.

“Obviously, this is… I think my recollection this is probably the first time we’re doing it with Saudi Arabia, but I think it takes a little bit more time, but it makes things a lot clearer in the end.”

Asked if there was a conflict of interest given Saudi Arabia is one of the main belligerents in this conflict, Dujarric said: “I wouldn’t say conflict of interest. We welcome the generous contributions from the Kingdom of Saudi Arabia and that… we welcome the fact that these contributions will be helped… used by U.N. humanitarian agencies, which are then the… but it… the agencies themselves are then free to use those resources in the way they best see fit to help the Yemeni people.”

But, so far, there has been no full accounting of the deliveries.

Oxfam’s Adams told IPS in order to make sure that the three countries affected by Ebola can help their people and communities recover, donors need to:

from ReliefWeb Headlines http://bit.ly/1M7ZB8h
via IFTTT

Basic understanding of the pulse oximeter

One million Sudanese children not enrolled in basic schools: Ministry