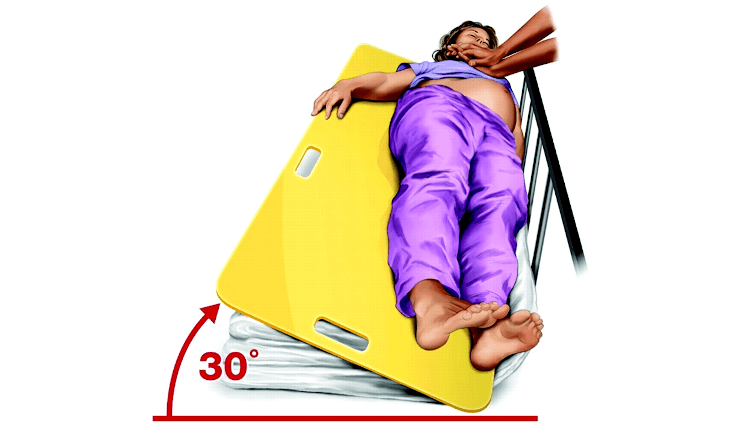 Trauma pregnant woman is a particular type of patient to treat. Many fetal deaths are caused by traumatic incidents. It seems not common, however, a trauma in pregnancy affects 7% of all pregnancies.

At the first place as a cause of traumas, there is a car accident, while at the second place we have intimate partner violence, which a paramedic should never exclude. This article will analyze the steps a paramedic has to take with a pregnant woman with suspected or confirmed trauma, also in case of resuscitation.

All the data have been collected by studies on trauma pregnancy elaborated by the Brave African Discussion in Emergency Medicine (#badEM). Links at the end of the article.

Resuscitation on trauma pregnant woman – First question: how can we look after 2 patients?

Supposing that a young woman, in her second trimester of pregnancy, experiences a motor vehicle collision or a car accident. She was not wearing a seatbelt. She arrives at the ED delivered by a basic life support ambulance crew, who has immobilised her on a spine board. She is diaphoretic, tachypnoea and appears grey. She is alert but anxious, complaining of chest and abdominal pain. Initial vitals are Sats 82% on room air, HR 120 BPM, BP 80/60. Let us see what are the single steps:

3. A pregnant trauma woman is physiologically and anatomically difficult to intubate. It requests a well-skilled and prepared team. Administer supplemental oxygen if required, aiming for oxygen sats of 95-98%.

4. Bear in mind that fetal loss is higher when there is a maternal shock. You must identify the cause of the shock and treat. In particular, a pregnant woman has an increasing circulating blood volume, that means that she loses more of her blood volume to manifest hypotension than if she were not pregnant.

5. Pregnant women were excluded from trials studying the efficacy of Tranexamic acid (TXA) in trauma patients. It classified as a category B drug in pregnancy, meaning that no animal studies have shown adverse outcomes with its use, but no human studies exist. TXA crosses the placenta. Despite the lack of published research, TXA may be of benefit in bleeding, seriously injured pregnant patients.

Another caution to take is avoiding vasopressors wherever possible because they are associated with worse outcomes. In the specific case, they usually produce vasoconstriction of the placental bed, increasing the risk of fetal hypoxia.

6. Tilt the patient left lateral before starting resuscitation manoeuvres. The most usual way is keeping her supine, and then displace the uterus of the IVC, by pulling it from the left or pushing it to the right. In case this manoeuvre should last for a long time, it could be easier pushing the uterus from the right side instead of pulling to the left.

Anti-tetanus toxoid is safe, like opiates, in pregnancy. In order to understand and determine the fetal viability, an obstretic ultrasound should be done. The gestational age at which the fetus is considered viable varies between countries: most guidelines consider viability from 23-24 weeks. In this case, no external fetal monitoring is advised, and further management is focused on optimising the mother.

In LMICs (Low and Middle-Income Countries), fetal viability may be considered to be more than 28 weeks, depending on the available resources to look after preterm infants. In this other case, cardiotocographic monitoring is advised to monitor fetal well-being and to monitor for uterine contractions, provided that monitoring does not interfere with maternal resuscitation and care.

Prehospital spine immobilization in penetrating injuries: yes or no? What do studies say?

How to provide correct care to a pregnant woman with trauma? SOURCE

Trauma and Considerations Unique to Pregnancy

Guidelines for the Management of a Pregnant Trauma Patient