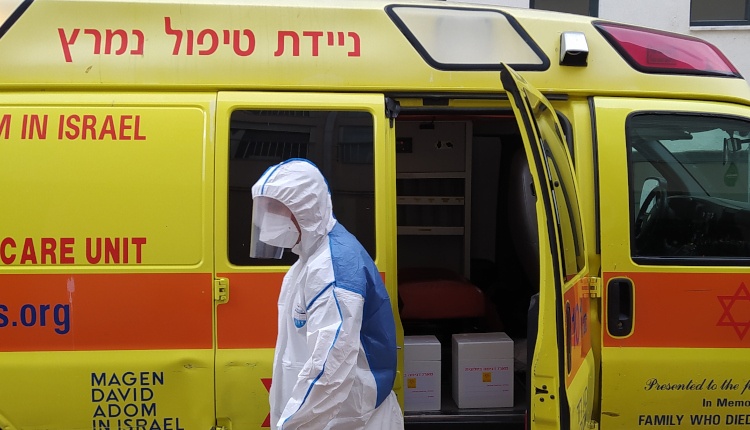 The initial contact, using telemedicine, allows for a targeted intervention and for a paramedic to come to the patient’s home and transform it into an improvised medical clinic

One EMT accessed his medical history and the medications he was taking by viewing everything directly on his tablet.

Another checked the woman’s vital signs and examined her for obvious signs of pain or infection.

Remotely, at the operations centre, a doctor monitors operations and coordinates procedures.

The intention of the 101 is to reduce hospital and emergency room admissions by managing the patient from the first contact.

In a review of some 1,000 patients who called an ambulance, 70% were deemed healthy enough to be treated by health professionals outside a hospital setting.

The pilot project, partly funded by the Israeli Ministry of Health, serves the Yarkon and Sharon regions of central Israel.

All patients are members of Maccabi, the second largest of Israel’s four national HMOs.

As of mid-June, Magen David Adom will significantly increase the ‘telemedicine and ambulance’ programme, extending it to the entire central region of Israel and Jerusalem.

The programme, which could reduce the number of patients requiring hospitalisation by up to a third, allows paramedics and EMTs to perform ECGs and test a patient’s blood oxygen saturation, lung capacity and blood pressure.

Once the information is transmitted to a doctor, the field team and doctor jointly assess whether the patient should be transported to hospital by ambulance.

Although MDA came up with the idea several years ago, it was the COVID-19 pandemic that finally convinced the Ministry of Health that keeping non-emergency patients at home was better for both the patient and Israel’s overburdened medical system, said Dr. Refael Strugo, MDA’s medical director.

“It’s better medicine,” Strugo said. “If the world was taught anything during COVID, it is that it is better to treat patients, and especially the elderly, in their home environment.”

Many geriatric patients experience physical, emotional and cognitive decline when they are hospitalised, Strugo noted.

Hospital-acquired infections, disorientation, falls, malnutrition and improper medication intake can all have an impact.

“EMTs and paramedics are already trained to know who in general needs to be evacuated quickly to hospital and who doesn’t, so triage is already an intrinsic part of their job,” he said.

Pilgrimage On Mount Meron In Israel, At Least 44 Victims: Video Of Rescuers From Magen David Adom

Bolivia and Covid, the government's solution to the shortage of oxygen cylinders: a new generator plant built