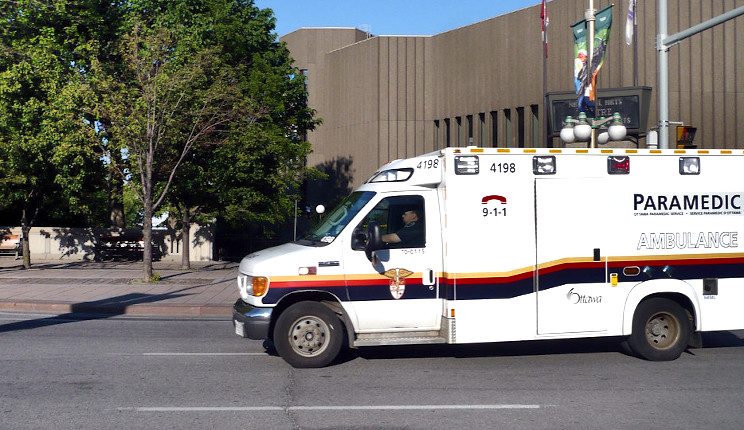 Paramedics, EMTs, nurses and healthcare providers, in general, have one aim: save other people’s lives. But it can happen that the people you are trying to save are not what they seem. Here’s the story of a paramedic, that, during an ambulance dispatch, discovers his patient is the killer.

Our protagonist is a paramedic in Ontario and she had to face a very unpleasant situation. After an ambulance dispatch, you arrive on a double stabbing scene and your patient turns out to be the killer. Emergency medical services have to face many dangerous and difficult situations. The #AMBULANCE! community started in 2016 analyzing some cases. This is a #Crimefriday story to learn better how to save your body, your team and your ambulance from a “bad day in the office”!

The case: Double stabbing – Ambulance dispatch and the paramedic realizes his patient is the killer

“It was a sunny day in May 2008, we had the windows open in the ambulance, it was lunchtime and my partner and I was deciding what we wanted to eat for lunch when we were dispatched to a stabbing.

We were the second ambulance responding because there were 3 patients and police were already on scene. As we drove up to the scene, it was just sheer panic with people running everywhere. We parked our ambulance in front of the child care centre in this plaza that had approximately 15 small businesses in it.
Our ambulance was not even stopped yet when we were directed to walk about 40 feet to our patient.

As I walked briskly to the 20-year-old male patient, I passed a body lying on the ground covered in a yellow blanket, later I learned that was a 50-year-old female. I continued on my way, passing a police offer performing CPR on a 55-year-old male patient. The police offer was covered in blood and had no equipment with him, he was all by himself. He looked terrified then he had a moment of relief when he saw us but when we kept walking by he became terrified again.

Here in Ontario, we have a triage system that directs us to leave those that are ‘Vital Signs Absent’ till the last patients to be treated and that the first ambulance crew on the scene would direct all other ambulance crews and assign them their patient that they are responsible for.

My partner started to secure the patient to the spinal board while I applied pressure to the neck wound and obtain an event history. I was told that he was stabbed in the neck. We loaded him into the ambulance, advised the Police that we were leaving the scene, confirmed he had been searched and asked for an escort (a police officer to join us in the ambulance).”

Ambulance dispatch for a double stabbing: the transport

“All of this took less than 10 minutes. En route to the hospital, I learned that my patient was the ‘bad guy’ who stabbed and killed an elderly couple and then turned the knife on himself. The police department had far more information then they shared with us. The patient asked me repeatedly if he was going to die or I better let him die. The patient then followed up the questions with various threats toward me and my family.

He was going to come to find me and kill me or my family. I was in the back of the ambulance with the patient, my partner was driving the ambulance so no one was able to hear these threats towards me.
The fear for me set in once I transferred care to the hospital, gave them my report and listen to the police officer explain all the information that he had.

I quickly realized that this patient could have easily attacked my partner and myself as he was not searched on the scene to confirm he had no other weapons, he had a long and extensive history with the police involving violence. His attack on the other two patients on the scene was unprovoked and random.”

Ambulance dispatch for a double stabbing: the analysis

I have to start off this section of the assignment by stating some things that were done well. In Ontario, we have ‘principle’ when dealing with trauma patients, it is referred to as the ‘golden hour’. What this means basically, is that trauma patients need to be at definitive care within 60 minutes. For paramedics, our goal is to be off scene and mobile to the hospital within 10 mins. We were successful in that principle. We also provide the patient with the highest level of prehospital care available. We prevented death and further injury.

The things that could be improved upon is communication. The police officers on the scene could have provided us with more information and details about the event and how the patient became injured. The police officers should have searched the patient more thoroughly and they should have attended in the back of the ambulance with me to ensure safety especially when they were asked to.

In the next several weeks after this situation, there were several debriefings including multiple agencies and all levels from each organization. Policies were rewritten and training was provided to ensure that police escort dangerous patients and provide more information in situations like this to the paramedics’. There was also some training completed on self-defence and how to protect ourselves.

Several years later, this ambulance service has finally developed a peer counselling/support team for the paramedics that experience situations that they are struggling with. I had to find myself a professional to talk with to deal with the feelings that I was having. No one for the ambulance service assisted with this matter, but I did not ask or tell anyone about this either.

This call was one of the only calls that I can honestly say that I had nightmares and flashbacks about. The patient truly scared me with his threats towards myself and my family. When I was called to testify against him, it was one of the most difficult things I have had to do, to face him knowing what he had done to so many people’s lives.”

Violent and suspicious grief reaction during an emergency survey