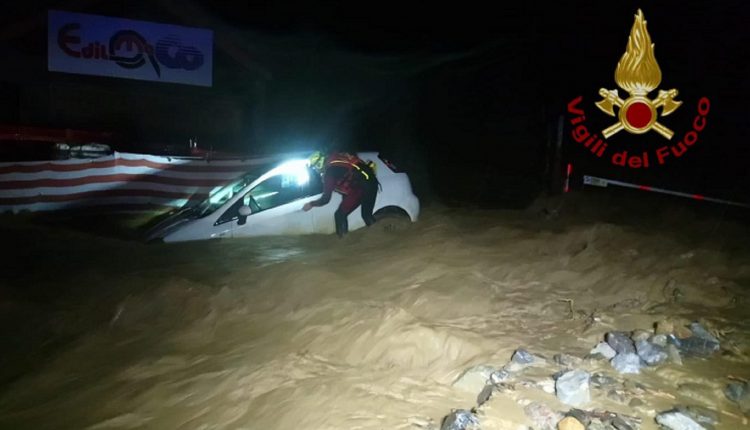 Bad weather in Piedmont: a deplorable and sad story where French first responders failed to intervene after help requests of 40 Italians in danger because of the bad weather. This behaviour forced Italian responders to an unusual trespass.

Our responders took hours to evacuate the forty or so human beings in danger.

BAD WEATHER IN PIEDMONT, CHAOS ON THE BORDER BETWEEN FRANCE AND ITALY

Theatre of misdeed, because it remains so even in the face of the happy ending, the border between France and Italy. AGI agency reported: “the flood that devastated the Cuneo area had very heavy repercussions even beyond the border where, according to what the AGI learned, already between 9 and 11 a.m. the Italian police had located beyond the Tenda tunnel, in French territory, 4 cars with 8 people remained between the two fronts of the landslide of Limone Piemonte and other 47 people in Vievola, a French town 10 kilometers from the border, blocked by mud in a valley.”

With helicopters of Finance and Fire Brigade already in flight, the Italian part has made itself available for the recovery with makeshift landings in French territory. At noon the first overflight clearance was requested, but it was denied by the Codis 06 Operations Room in Nice.

At 12.50 p.m. the first call from the emergency room in Nice arrived at the fire station in Cuneo, assuring that “within one hour and 10 minutes” a French helicopter would be on site. But at 14.10 no overflights were visible from Italian territory”.

The French would have asked several times to wait and not to trespass. Wanting to be good, one can think that it was to see if the wind dropped a bit on their side, a factor that prevented the transalpine helicopter rescue from getting up in the air.

The fact is that, after six hours of waiting, the Fire Brigade broke the delay and, in agreement with the public safety authorities, crossed the border on foot and recovered the Italians beyond the Tenda Bridge: six Italians, a Pole and a Frenchman, brought to Limone Piemonte.

An hour later, at 5 p.m., a new request of the Italian fire brigade helicopter to France for permission to cross the border, and a new refusal.

After a further hour of waiting, also the helicopter of the Fire Brigade crossed the border, at the request of the Italian operational center: it was 6 p.m., the darkness loomed over isolated people in the heat of the bad weather.

Thus, 41 people out of 47 remained isolated.

Six preferred to wait for the French helicopter, but it did not arrive before nightfall.

“As soon as we realized that time was running out and it was about to get dark again since our helicopters could guarantee us the service, we decided to proceed by communicating to the central station in Nice, which after seven hours did not object anymore” explained to the AGI the quaestor of Cuneo, Emanuele Ricifari.

The French institutions, repeatedly questioned by AGI to have their reconstruction of what happened, have never responded.