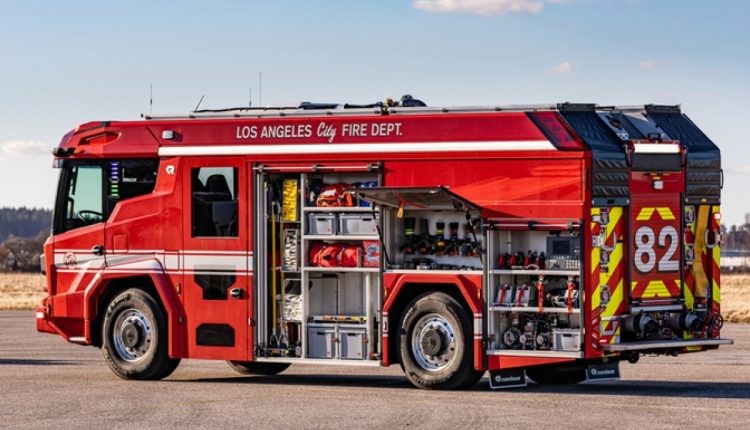 It was a historic day in Los Angeles on Saturday, May 14, with the unveiling of the Fire Department’s newest addition to its fleet — the country’s first all-electric fire engine

Los Angeles, the inauguration of the first all-electric fire truck in the United States

LAFD officials and local dignitaries gathered at the Los Angeles Fire Department Historical Museum in Hollywood for Fire Service Day and to welcome the fire engine from Austrian-based Rosenbauer, a manufacturing company that builds tools and equipment for firefighters.

The agency ordered the fire engine in 2020, with it originally to arrive in 2021 but complications caused by the coronavirus pandemic got in the way, Assistant Fire Chief Wade White said.

At the time of the purchase, there were only three such Rosenbauer fire engines or trucks in the world, in Berlin, in Amsterdam and in Dubai

Other manufacturers might have produced somewhat-similar ones. But in regard to the United States, LAFD’s version is the first ever all-electric fire truck or engine in the country, the company says.

LAFD Chief Kristin M. Crowley said the engine is a stepping stone toward a green future for Los Angeles.

The fire engine features two batteries with a charge capacity of 100 kilowatts, enabling it to fully operate for roughly two hours. There’s an onboard diesel generator as backup for the batteries. The fire engine also comes with a small diesel engine — just in case.

The base cost for a Rosenbauer RT — or Rosenbauer Real Technology — is $900,000, with agencies able to customize them.

The engine is automatically deactivated when at a standstill, though the lighting and equipment remain powered by the batteries, reducing the noise level, which the chief said is important when emergency crews require focus.

“It will reduce noise, and bring it basically to nothing in regards to diesel emissions,” she said. “We will actually create the space for our firefighters to be healthier around our fire engines.”

The fire engine largely retains the traditional look with a red coat of paint.

It has a tight turning radius. The vehicle also can rise and lower to meet needs based on the terrain, Crowley said, unlike the other engines in the city’s fleet.

It was assigned to Fire Station 82 in Hollywood, where crews have been training the last few months to operate the engine in anticipation of its arrival, Scott said.

The station will serve as a testing site, as officials closely watch how the fire engine manages Hollywood Hills’ narrow roads.

At the end of the ceremony, Crowley drove the engine to Station 82 — where crews continued a long-held tradition by pushing the fire engine into the apparatus bay that will be its new home.

What are the risk factors for breast cancer?