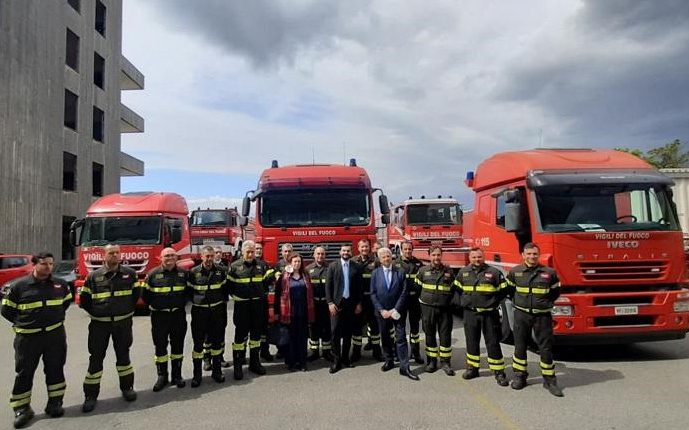 In the next few hours, the first 4 of 50 fire brigade vehicles that the Fire Brigades will donate to Moldova and Ukraine will leave Trieste

The fire trucks, tanks and tankers have already been loaded onto larger vehicles which the fire brigade will deliver to the Moldovan authorities after travelling approximately 1,500 kilometres to replace the 4 vehicles that the latter gave to Ukraine.

Moldova is strongly committed to assisting the people fleeing the war in neighbouring Ukraine.

For this reason, through the Moldovan Embassy in Italy, a request for assistance has been made by the authorities in Chisinau to the Department of Fire, Public Rescue and Civil Defence in order to receive goods and support equipment.

SPECIAL VEHICLES FOR THE FIRE BRIGADE: DISCOVER THE PROSPEED BOOTH AT THE EMERGENCY EXPO

Special vehicles of the Italian Fire Brigades in Moldova and Ukraine, the official note

The vehicles, a tanker truck and three pump trucks, came from the Fire Brigade Commands of Turin, Alessandria, La Spezia and Monza.

The entire management of the expedition was coordinated and supervised by Fire Brigade personnel.

On 9 April, in Trieste, the Undersecretary of the Interior, Mr. Sibilia, presented the important operation accompanied by the Deputy Head of the Fire Department, Prefect Guercio, and the Director of the Emergency, Mr. Ghimenti.

The Prefect of Trieste and the Commander of the Fire Brigade were also present.

“This is an operation of solidarity and generosity on the part of the CNVVF,” explained Sibilia, “on the part of these wonderful people who are behind me and who will be driving about 1,500 km from Trieste to Chisinau the vehicles that will be able to give support to the civilian population of Moldova and Ukraine.

These are the first four vehicles of 50,” added the Undersecretary, “that we are providing to these populations in cooperation with the Union Mechanism and the Italian Civil Protection.

We are doing all this to give material support to the people in difficulty in those territories today.”

The donated fire-fighting equipment will be transported by a special convoy of the National Corps, escorted by a car with two firefighters from the TAST module on board, which will leave Trieste on 10 April for Chisinau.

The delivery will take place on 13 April through the Italian Embassy in Moldova”.

Covid Xe variant: what are the symptoms?