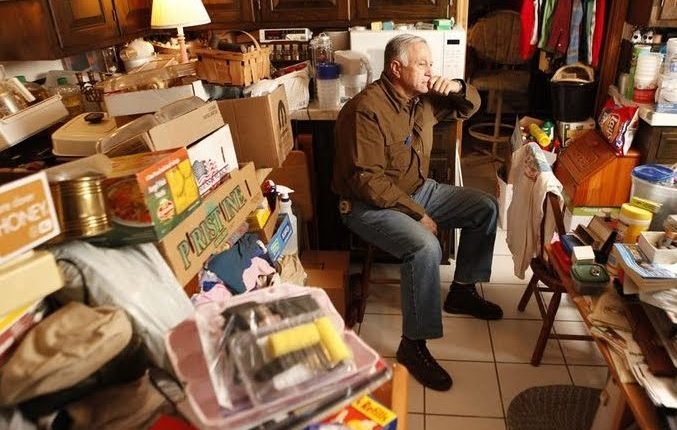 Dysposophobia: buried at home, this is the image that most characterises people suffering from hoarding disorder, also known as disposofobia

Some of you may have been watching the American television series of the same name, intrigued by the extreme conditions in which these ‘disposofobic’ people manage to live, or rather survive.

Hoarding disorder (Dysposophobia) is characterised by the excessive acquisition of objects and, at the same time, the inability to throw them away

The objects can be the most diverse: from newspapers to clothing, from rubbish to old food containers.

It is precisely the inability to throw things away that can lead to significant cluttering of spaces in the home, to the point of hindering normal daily activities such as cooking, cleaning, moving around the house, even sleeping.

The large quantities of objects accumulated by those suffering from disposophiphobia can threaten the health and safety of those living in or near the home.

Fires, falls and even illnesses can occur, given the poor hygienic conditions in which these dysposophobic persons live.

Another element that characterises people with compulsive hoarding is the progressive isolation they experience as a result of the embarrassment and shame they feel about inviting guests into their homes. In many cases, conflicts arise with family members and even neighbours.

Their estrangement and hostility increase the suffering of these people who suffer from dysphobia in a vicious circle that comes to severely impair their psychological functioning, leaving them in a state of total abandonment.

Dysposophobia, what is the dimension of the phenomenon of compulsive hoarding in Italy and in the western world?

One of our studies published in Behavioral and Cognitive Psychotherapy (Bulli et al., 2014) aimed to evaluate the prevalence of hoarding behavior in a non-clinical sample of adults. 1012 subjects participated in the study by completing a self-report questionnaire validated in Italian, the Saving Inventory-Revised (SI-R; Melli, Chiorri, Smurra & Frost, 2013).

The result took us a bit by surprise: as many as 6% of the sample claimed to implement a set of behaviors that are the prerogative of people suffering from hoarding disorder or hoarding disorder.

The analysis of demographic variables showed that there were no significant differences for sex, age, marital status, educational qualification and occupation.

This result is consistent with previous studies, conducted on both clinical and non-clinical populations, according to which hoarding behavior and symptoms of hoarding may be present across different clinical manifestations of a psychiatric, neurodegenerative and in some cases genetic order, and therefore the Compulsive hoarding disorder cannot merely be classified as a subtype of OCD.

From a phenomenological point of view, the fear of losing something important to the person, the fear of getting rid of things to which one feels emotionally attached or the fear of making mistakes about what is best to keep or throw away could be considered analogous to obsessions, while not throwing away objects, as well as some acquisition behaviors could be assimilated to compulsions.

However, much research has provided evidence supporting important differences between compulsive hoarding and obsessive-compulsive disorder.

For example, thoughts about hoarding in patients with hoarding disorder (hoarding disorder) are not perceived as intrusive or unwanted; they are not repetitive, as obsessions typically are in OCD patients.

Compulsive hoarding is a passive phenomenon, in which intense discomfort is felt only when these people are faced with the need to get rid of what they have.

The experience of acquiring things, on the other hand, is felt as ego-syntonic, pleasant, or in any case such as to generate a feeling of security.

One of the peculiar characteristics of subjects with disposophobia is a strong attachment to the things they own, sometimes attributing to them a strong sense of identity.

Here the scenario of having to get rid of things to which they feel they are very emotionally attached can be experienced by the person as very painful.

Sometimes these subjects come to think that inanimate things have real feelings.

The obsessive-compulsive patient, on the other hand, even in cases in which he manifests hoarding symptoms, is in no way interested in the intrinsic value of the object.

For example, a hoarding behavior might be the result of superstitious thoughts such as, “If I throw something away, I’m afraid something bad might happen to a loved one.”

In this case, therefore, the difficulty in getting rid of that object is not so much linked to the attribution of an emotional value to it, but rather represents a protective strategy in response to intrusive thoughts of a catastrophic nature.

On the other hand, the meaning attributed by patients with hoarding disorder to the same incapacity to throw away is different.

Since objects are an integral part of their personal identity, of their memory, getting rid of them is equivalent to a real mourning experience.

Hence the prevailing emotions of grief and anger of those with homicide phobia.

Disposophobia, a psychiatric entity in its own right

In recent years, the study of hoarding disorder has received increasing attention and its nosographic characterization has been the subject of lively scientific debate.

While such behavior has often been reported as a symptomatic manifestation of obsessive-compulsive disorder, strangely it was not directly mentioned in the DSM-IV-TR as a symptom of OCD.

Rather, it fell within one of the eight criteria for Obsessive-Compulsive Personality Disorder.

Not OCD then, but not phobia either, although hoarding disorder, as already mentioned, is also referred to as disposofobia (literally ‘fear of throwing away’).

This term can be misleading as it fails to provide an exhaustive picture of the clinical complexity of these patients.

The nosographic ambiguity of hoarding disorder has been resolved in the DSM-5 (APA, 2013) by its recognition as a separate entity in the international psychiatric landscape.

This categorisation can better do justice to a disorder that also exhibits distinct characteristics in the brain.

In fact, a study by Tolin and co-workers at Yale University School of Medicine, published in Archives of General Psychiatry in 2012, showed that individuals with hoarding disorder exhibit fundamental differences, compared to obsessive-compulsive patients and normal adults, both in the anterior cingulate cortex, which is associated with error detection under conditions of uncertainty, and in the medial and anterior insula, which is linked to risk and importance assessment of stimuli and emotionally charged decisions.

Compulsive hoarding disorder, according to the authors, would seem to be characterised by a marked avoidance of the decision-making process for possession.

Crucial in this seems to be the affective attachment to things and the importance for these patients of owning objects that are considered of no value to most people.

These are the cases in which objects can take over people’s lives, enslaving them.

Tics And Swearing? It’s A Disease And It’s Called Coprolalia

What Is Lima Syndrome? What Distinguishes It From The Well-Known Stockholm Syndrome?

Recognising The Signs Of Compulsive Shopping: Let’s Talk About Oniomania

What Is A Psychotic Disorder?

What Is OCD (Obsessive Compulsive Disorder)?

Antipsychotic Drugs: An Overview, Indications For Use

Urinary incontinence: which treatments are most effective

What is the breath test?

Body Mass Index, what is BMI and how it is assessed

Spinal biopsy: what it is, how it is performed and what risks it presents