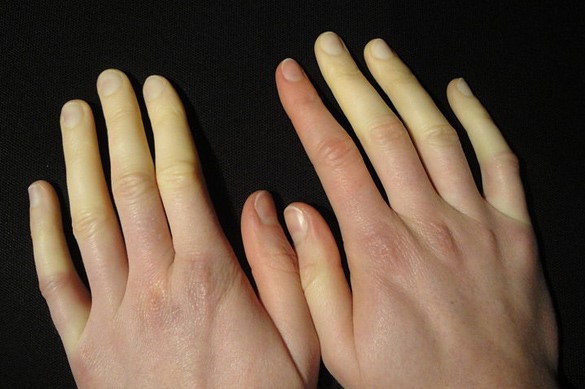 Exposure to cold and symptoms of Raynaud's syndrome

Raynaud’s syndrome: fingers that turn white when exposed to cold, then redden and swell?

This could be Raynaud’s phenomenon, a frequent problem particularly among young women, linked to a sudden decrease in blood flow, followed by dilation of the vessels and local blockage of circulation.

A disorder that should not be frightened, but neither should it be underestimated.

How does Raynaud’s syndrome manifest itself?

In people with Raynaud’s syndrome, on exposure to cold, sometimes even in the transition from hot to cold, there is a drastic reduction in blood flow (ischaemia) in the extremities: hands, and occasionally feet, nose, ears.

As a result, one or more fingers, with a clear demarcation between the ‘ischaemic’ and ‘normal’ areas, first turn white, then redden (hyperemic) and sometimes swell (oedema) and finally discolour to blue-purple (cyanotic).

The 3 phases (reminiscent of the colours of the French flag) can vary in duration, sometimes being very fleeting, but also very persistent.

Those suffering from Raynaud’s phenomenon may also suffer, especially in winter, from small lesions of the extremities of an ulcerated type (the upper part of the skin is missing) and sometimes necrotic (blackish tissue or painful scabs appear).

Raynaud’s phenomenon can have a purely functional origin, i.e. not linked to pathological states, and be favoured by

There is also a constitutional component, for example, in young women who are more prone to the problem than men, and one linked to emotional stress.

In some cases, however, Raynaud’s syndrome may be based on diseases, including some potentially very serious ones: Raynaud’s phenomenon is often the first symptom of Scleroderma, literally ‘hard skin’, a disease that leads to a hardening and thickening of the skin in more or less extensive areas of the body surface due to fibrosis, i.e. the formation of connective tissue of a scar-like nature, affecting various internal organs (oesophagus, intestines, lungs, kidneys and heart).

It also appears in many other autoimmune connective tissue diseases such as systemic lupus erythematosus and Sjogren’s disease, and is an important symptom in mixed cryoglobulinemia, a rare systemic vasculitis.

Tests to diagnose it

In order to confirm the diagnosis and discriminate between functional or pathological forms and between connective tissue disease and other pathologies, we need

Periungual capillaroscopy, or transdermal angioscopy, is an examination that is performed at the level of the nail cuticle (the bezel at the base of the nails) and allows us to see how the vessels dilate and whether they are in pain.

In functional forms of Raynaud’s syndrome, the capillaries generally appear normal, whereas in forms secondary to connective tissue and autoimmune diseases, typical abnormalities (dilation of vessels, microhaemorrhages of capillaries, absence of capillaries/sclerosis) can be seen.

The examination is based on the use of a coherent light source, appropriately spaced from the skin surface, combined with a video recording system and, by means of optical fibres, with a computer on which the part under examination is highlighted.

It is necessary that the cuticle is as large as possible, so it is recommended not to have a manicure for at least 10 days and to avoid nail polish and false nails.

It is also important not to eat your nails in the 15 days before the examination, as the capillaries in the cuticle of onychophagous (nail biting) nails often show ‘tear’ changes that can distort the examination.

How can Raynaud’s Syndrome disorders be alleviated?

If the Raynaud’s phenomenon is linked to a functional problem, certain precautions should be taken, such as:

In more serious cases it may be useful to take vasodilator drugs or aspirin in low doses to avoid clotting defects.

This therapy uses the biological effects of electrical energy for therapeutic purposes by applying electrical currents close to the painful area with electrodes on the skin (transcutaneously).

Compared to other electrotherapy treatments, however, the software-controlled short-pulse treatment has special features that make it more targeted and therefore more effective.

Mainly used for pain, this treatment is also useful in many situations of circulatory distress and skin ulcers.

Obviously when there is an underlying autoimmune disease, treatment of this with the appropriate drugs, now available, is essential.

Psoriatic Arthritis: What Is It?

Psoriasis: It Gets Worse In Winter, But It’s Not Just The Cold That’s To Blame

Acute bronchitis: what are the symptoms, how long does the cough last and how to treat it

Brain stroke in patients with COVID-19 infection: a first study