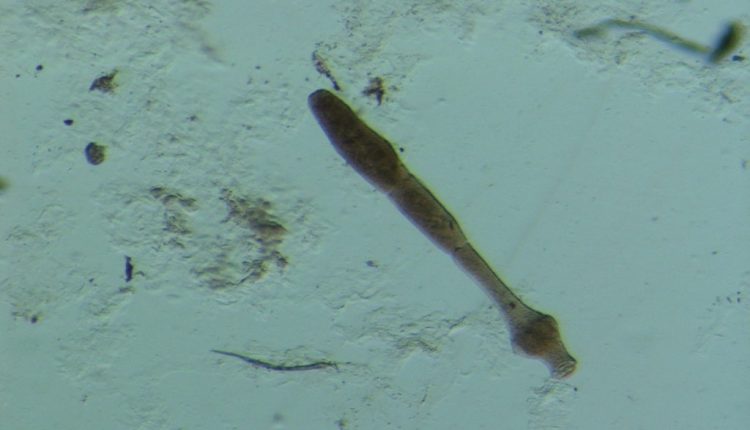 Symptoms depend on the organ involved, e.g. jaundice and abdominal pain if there are liver cysts or coughing, chest pain and haemoptysis if there are lung cysts.

Ruptured cysts may cause fever, urticaria and severe anaphylactic reactions.

Diagnosis is based on imaging, examination of cyst fluid or serological tests.

Treatment is either albendazole-based, surgical or both, or involves aspiration of the cyst with instillation of a scolicidal agent.

Echinococcus granulosus is widespread in sheep breeding areas in the Mediterranean, the Middle East, Australia, New Zealand, South Africa and South America. Other outbreaks exist in parts of Canada, Alaska and California.

Dogs are the definitive hosts, which have adult tapeworms in their gastrointestinal tract, and herbivores (e.g. sheep, goats, pigs, cattle, camels, horses and deer) or humans are intermediate hosts that develop cystic lesions in the liver or other organs.

Adult E. multilocularis are found in foxes, coyotes and dogs, and hydatid larvae are found in small wild rodents.

Echinococcosis, infected dogs are the main vehicle for occasional infection in humans

Its natural range of infestation in the continental United States extends from Wyoming and the Dakotas to northwestern areas.

Rarely, Echinococcus vogelii or Echinococcus oliganthus cause a hydatid disease in humans, which is usually in the liver. The disease may be polycystic (E. vogelii) or unicystic (E. oliganthus).

These species are found in Central and South America.

Eggs ingested from animal faeces (which may be present on the fur of dogs or other animals) hatch in the intestine and release oncospheres (immature forms of the parasite within an embryonic envelope).

The oncospheres penetrate the intestinal wall, migrate through the circulation, and nest in the liver or lungs or, less frequently, in the brain, bone or other organs.

There are no adult worms in the gastrointestinal tract of humans.

In the tissue, the oncosphere of E. granulosus become cysts, they slowly (usually over many years) grow into large, fluid-filled, uniloculated lesions, hydatid cysts.

Large cysts may contain > 1 L of highly antigenic hydatid fluid, as well as millions of protoscolics.

Sometimes daughter cysts form inside or outside the primary cysts.

If a liver cyst ruptures or leaks fluid, the infection may spread to the peritoneum.

Cysts are mainly found in the liver but may colonise the lungs or other tissues.

The cysts are not large, but they invade and destroy the surrounding tissue and may cause liver failure and death.

Although many infestations are acquired during childhood, clinical signs of echinococcosis may not become apparent for years, except in cases where cysts are located in vital organs. Symptomatology may mimic that of a space-occupying tumour.

Finally, liver cysts may cause abdominal pain or palpable masses. If a bile duct is obstructed, jaundice may occur. Rupture in a bile duct, peritoneal cavity or lungs may cause fever, urticaria or severe anaphylactic reaction.

CT, MRI and ultrasound findings of the abdomen may be pathognomonic for cystic echinococcosis in the liver if they show daughter cysts and hydatid sand (protoscolic and debris), but it may be problematic to differentiate hydatid cysts from benign cysts, abscesses or benign or malignant neoplasms.

The presence of hydatid sand (scales pass into the cyst fluid and form a white sediment) in the cyst fluid aspirate is diagnostic. World Health Organisation criteria use imaging findings to classify cysts as active, transitional or inactive (1).

Lung involvement may present as round or irregular masses on chest X-ray.

Treatment of cystic echinococcosis (hydatid) varies depending on the type, location and number of cysts and on imaging findings indicating whether the cysts are active, transitional or inactive (1).

Surgical resection can be curative and is the best treatment for complicated lesions with the following characteristics: ruptured cysts, cysts with biliary fistulas, cysts compressing vital structures, cysts with daughter cysts, cysts with a diameter > 10 cm, superficial cysts at risk of rupture due to trauma and cysts accompanied by extrahepatic disease.

To prevent metastatic infections that may occur if cyst contents leak out during the procedure or if material is inadvertently left out, albendazole is generally administered one week before, during and at least 4 weeks (up to 6 months depending on clinical and imaging response) after surgery or instillation of a scolexing agent and reaspiration.

Small unilocular hydatid cysts can be treated with albendazole alone for several months, with a 30% cure rate.

Albendazole alone is also the treatment of choice for inoperable cysts.

Observation alone is an option for asymptomatic cysts that are naturally inactivated (not inactivated by drug treatment).

Liver transplantation has been fully successful in a few patients.

Patients with alveolar echinococcosis due to E. multilocularis should receive albendazole (in the daily dosage used above for cystic echinococcosis) for ≥ 1 week followed by surgical resection, if possible, depending on the extent, location and manifestations of the lesion.

The prognosis is bleak unless the entire larval mass can be removed.

Albendazole is administered continuously for at least 2 years and patients are subsequently monitored for recurrences for 10 years or more.

It is important to monitor blood count with formula and liver enzymes during treatment.

How Staphylococcus Aureus Infections Are Contracted And Treated

Pan-Resistance, Candida Auris In US Hospitals: Warning From CDC Atlanta

Sore Throat: When Is It Caused By Streptococcus?

Epicondylitis in the elbow: what it is, how it is diagnosed and what are the treatments for tennis elbow