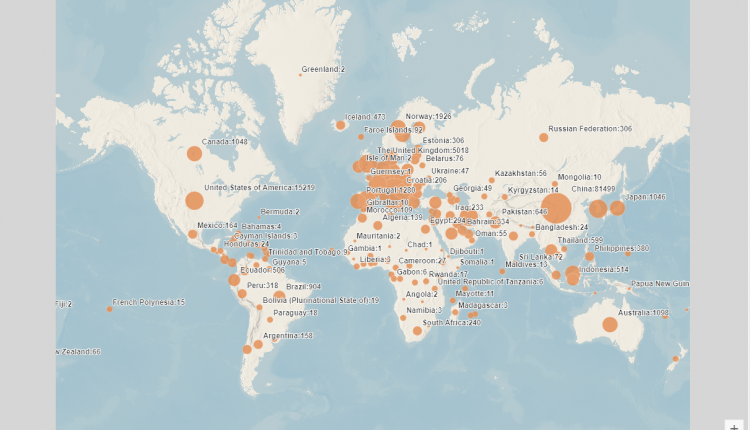 SARS-CoV-2, the report of coronavirus infection continent by continent

SARS-CoV-2: the data given by the WHO (World Health Organization) are heavy numbers like boulders compared to the coronavirus pandemic: there are 340 thousand cases verified, with almost 15 thousand deaths. More or less 100 thousand people hospitalized for COVID-19.

Some data are vague, but this is due to the difficulty of collecting all the certifications, which is the reason for important “leaps” both in the raw numbers and in the statistics minute by minute. The situation about SARS-CoV-2 is changing moment by moment. As we are writing this article on COVID-19 worldwide, the situation is maybe changing, however by this far the data you will find here, it will be absolutely correct.

In the European Union, Italy is the main character of this drama, with 53,578 cases of infection. Following what immediately seemed to be one of the most affected countries, Spain is now collecting a serious number of infected people: 25 thousand confirmed cases. The third and the fourth place of this sad ranking are covered by two countries that have not immediately given the right importance to the issue, Germany and France: 21.5 thousand and 14.5 thousand coronavirus positive people in these two countries.

Switzerland is the fifth most positive country, with 6,000 cases.

You can detach the other nations.

The American continent is literally broken in two. North America has very high rates by virtue of the trend in the US health care, which unfortunately experiences days of great difficulty: more than 15,000 cases have been ascertained in the USA. The worst state is New York.

The data regarding Canada, which shows 1,048 infected people, is less invasive.

From Mexico downwards, the numbers are fortunately less important: 904 positive cases in Brazil, leader of the Latin American nations, 506 in Ecuador, 318 in Peru and 158 in Argentina. Residual figures from most other nations. The hope is that everything will remain like this and that the affected countries will be able to cope with the wave with the least number of deaths possible.

The African is the most observed continent of this pandemic. In a previous article, we wrote that it is comparable to an immunosuppressed person surrounded by contagious relatives, and it is indeed so.

With great difficulty, the continent has freed itself from the damage of the Ebola virus, at least in its most violent phase, and now it has to face this new pandemic emergency.

To stand out, despite themselves, for contagion numbers are Egypt, with 294 infections, South Africa, with 240, Algeria, with 139, and Morocco, with 109. The other countries, for the most part, have cases of few units, even reaching (in four countries) zero infected people.

We are always reporting official WHO data for Monday 23 March in the morning.

It is, of course, the most affected continent, while the epidemic had broken out in China. For the country led by President Xi Jinping, there are 81,500 cases of contagion. South Korea certifies 8,900 cases, Malaysia nearly 1,200.

In general, the situation is quite under control in other countries: India, 1.4 billion inhabitants, currently has 341 cases of infected people. Less than in the Aosta Valley.

Of a few hundred cases of most other nations of the continent.

The least affected continent: Oceania. Australia is the largest country, and it is, therefore, quite natural that it shows the highest number of infected people, around 1,100 people. Much lower data from other countries.

THE COMMITMENT OF HUMANITY:

It goes without saying that the possibility that the continents (and individual nations) least affected are only touched by this tragedy is linked to a set of factors. Of course, from the attention of the rulers of those areas, but also from the responsibility of Western citizens and companies, who must choose not to infect areas that are currently spared by the pandemic.

The sense of brotherhood among the peoples of which many, from Charlie Chaplin (The Great Dictator) to Mahatma Gandhi, play on the possibility of expansion of this violent coronavirus. The latter once said: “You and I are only one. I can’t hurt you without hurting myself. ”

This sentence is most true, in this era dominated by SARS-CoV-2.

Coronavirus, what patients with heart disease should know about COVID-19