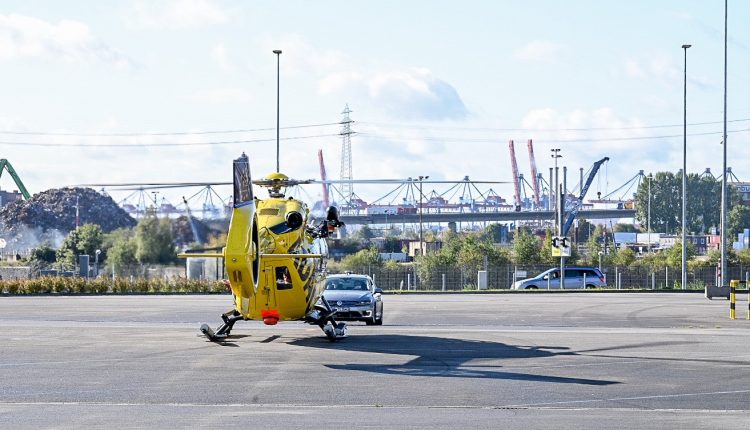 Germany, test of cooperation between helicopters and drones in rescue operations

Rescue operations, a new model for cooperation between helicopters and drones in interventions

Success in science and development: the non-profit organisation ADAC Luftrettung and the German Aerospace Centre (DLR) have jointly investigated how to network helicopters, drones and autonomous vehicles to further improve emergency medical assistance from the air

In a live demonstration at the Hamburg Cruise Center Steinwerder on 13 October 2021, the two organisations will show an international specialist audience for the first time how the Air2X project works in practice.

When the project was presented at the ITS World Congress, the crew of an ADAC rescue helicopter first received a drone in order to clear the airspace for the rescue flight.

The crew then brakes an autonomous vehicle – also from the flying helicopter – to protect the landing site required by traffic, for example. As associate partners, ADAC Luftrettung gGmbH and DLR have been studying the interactions between air and road traffic at ground level as part of Air2X from 2019.

The focus is on the question of how rescue helicopters can reach traffic incidents more quickly and safely.

THE BEST EQUIPMENT FOR HEMS OPERATIONS? VISIT THE NORTHWALL STAND AT EMERGENCY EXPO

For direct communication between helicopters, drones and cars, researchers have developed an interface based on the ITS-G5 radio standard used by networked vehicles

The idea behind it: the helicopter can contact aircraft and vehicles that have suitable receivers or corresponding on-board electronics. Air2X bridges the gap with autonomous vehicle technology, which can exchange safety-relevant information, warn occupants of dangers and prevent accidents.

The second focus is on communication with drones, which pose a serious safety risk to rescue helicopters flying, taking off and landing.

Before and during the entire mission, the helicopter sends information that the drones should clear the airspace and land in a controlled manner.

If they have an appropriate target, they will be instructed to land immediately.

“The cooperation with DLR allows us to combine science and practice, a unique feature in Germany.

With Air2X we underline our claim and legal mandate to further develop the air rescue service with future-oriented innovations and to make it even better and safer.

We are very grateful that the city of Hamburg has given us the opportunity to present the research project to the public,” said Frédéric Bruder, CEO of ADAC Air Rescue.

ADAC Luftrettung had already successfully carried out the first practical tests in August 2021 on a test site at Bonn-Hangelar Airport.

The conclusion: thanks to Air2X, flying yellow angels will be able to travel more safely and quickly in the event of road accidents in the future, in order to provide emergency medical treatment to the injured.

Support from air traffic control or ground helpers is not required when using Air2X.

A compact transmitter built by NXP Semiconductors Germany GmbH is placed in the cockpit of the helicopter to send Air2X information. Consider that IT GmbH has undertaken the necessary software modifications.

Before the technology can be used in everyday life, further testing and serial development with industry partners is required.

The ITS World Congress is the world’s largest and most important event on the subject of intelligent mobility and the digitisation of traffic.

This year it will take place from 11 to 15 October in Hamburg in the renovated Congress Centre (CCH), exhibition halls and selected streets.

Broken heart syndrome is on the rise: we know Takotsubo cardiomyopathy