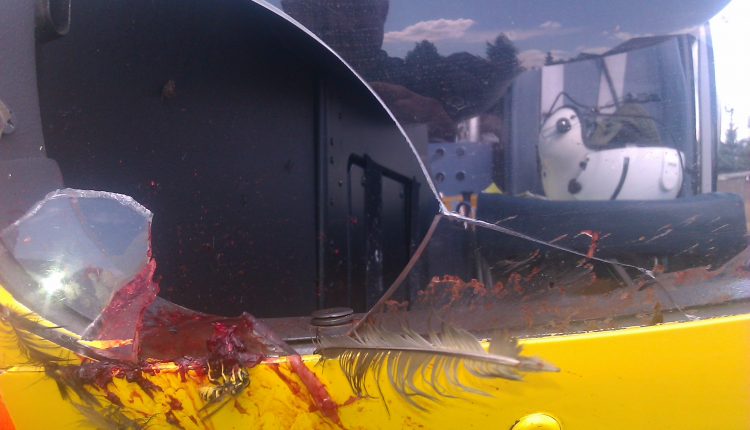 The dangers of bird strikes, the impact between aircraft (helicopters or planes) and birds, are well known to those working in the HEMS sector

Leicestershire (UK), helicopter struck by a crow and forced to make an emergency landing: the dangers of bird strikes

A helicopter, chartered by Derbyshire, Leicestershire and Rutland Air Ambulance, collided with a crow as it was returning to base (East Midlands Airport) with its crew on board.

The impact shattered the windscreen, hitting a crew member in the helmet and, with a fragment of its own, damaging the rotor blade.

Following the bird strike, the helicopter emitted a ‘noticeable’ vibration during flight, forcing the pilot to make a precautionary landing near Carsington Water in the Peak District to ensure the safety of the crew.

A report, published by the Air Accidents Investigation Branch (AAIB), states that the technical crew member in the front left seat of the helicopter first spotted the crow, shouting “bird” at the pilot.

The pilot then launched and rolled the helicopter to the right to try to avoid it, but it was too late, with the bird shattering the acrylic window, hitting the crew member on the helmet, before embedding itself behind the pilot’s seat.

HEMS, the dangers of bird strikes and helicopter construction materials

Legislation requires that windscreens are not made of materials that can crumble into dangerous fragments, and in this respect Plexiglas meets the requirements, but in the case of a bird strike the material has some safety limitations, and there is some debate among operators in the UK.

The new helicopters have in fact been built with modifications from this point of view, but those that are a few years old are still fitted with that type of windscreen.

The AAIB report on this incident states: “At about 1,000ft above ground level and 140 knots, as the helicopter was descending and turning towards East Midlands Airport on return from a HEMS mission, a bird struck the left windshield.

The windshield shattered and the bird entered the cockpit striking the technical crew member (TCM) on the left side of their helmet. The TCM and pilot were unhurt.

Debris from the windshield also entered the main rotor disk, making a hole in the trailing edge of one of the rotor blades.

The AgustaWestland AW109 windshield is not designed to withstand bird strikes and the design certification requirements do not require it to do so.

Proposed amendments, specifically to the certification of Small Rotorcraft were published in EASA NPA 2021-02 to change this for newly designed rotorcraft.

“A rule making group is also considering the retrospective application to existing fleets and/or to future production of already type certified rotorcraft.”