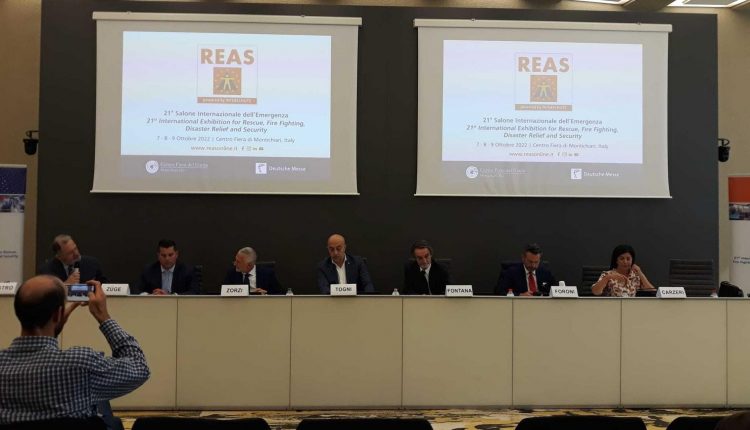 REAS 2022, the international exhibition will be held from 7 to 9 October at the Montichiari (Bs) Exhibition Centre: significant growth in exhibitors, exhibition area and conferences and side events

The 21st edition, which will be held from 7 to 9 October at the Montichiari (Brescia) Exhibition Centre, will in fact see significant growth: there will be more than 240 exhibitors, from Italy and 19 other countries (including Germany, France, Poland, Great Britain, the United States, Canada, Australia, China and South Korea), on a total exhibition area of more than 30 thousand square metres occupying the 8 pavilions of the exhibition centre.

More than 20 conferences and side events are also scheduled.

“REAS is a fair capable of promoting the internationalisation of the Italian emergency system, involving new foreign buyers and expanding the exhibition offer,” said Attilio Fontana, President of the Lombardy Region, during a press conference today at Palazzo Pirelli in Milan.

“It fulfils the important task of the trade fair system to promote Lombardy’s excellence, a showcase and at the same time a springboard for the business system, for operators, and for the Third Sector. The Lombardy Region is confirmed as the leader in Italy for the emergency sector.

Ours is the homeland of the father of Civil Protection, Giuseppe Zamberletti, a native of Varese who was the creator of that efficient system, still consolidated today, of forecasting and prevention, of rescue and organisation of the national service in all its components, of valorisation of local authorities and volunteers.

REAS rightly honours this Lombardy excellence, which over the years has been able to grow and evolve, leading us to excel in the national context and beyond”. “We are happy to record the sell-out of REAS 2022,” then emphasised Gianantonio Rosa, president of the Montichiari Exhibition Centre, “which for more than two decades has offered emergency and civil protection professionals and volunteers an opportunity to learn about the latest technologies and to keep abreast of the most topical issues.

The technological innovations at REAS 2022

Numerous technological innovations will be on display at ‘REAS 2022’, such as new special vehicles for emergency and firefighting, sophisticated equipment for first responders, anti-covid sanitisation systems and even drones for searching for missing persons in the event of natural disasters or major accidents.

Among the many events on the programme, a conference on the measures adopted in Italy to deal with the humanitarian emergency caused by the war in Ukraine is scheduled, at which the head of the Civil Protection Department, Fabrizio Curcio, and the Ukrainian ambassador to Italy, Yaroslav Melnyk, will speak, among others.

A round table will instead be dedicated to the latest forest fire campaign and the cooperation between the various regions to manage the fires that have broken out again this year throughout the peninsula.

Other conferences will focus on the role of volunteers in civil protection, air rescue, transport of paediatric or traumatised patients, emergency telecommunications, and planning and prevention of natural and man-made risks.

A number of side events are also scheduled, such as an educational project for children on emergencies, a basic course for civil protection volunteers and an inter-force exercise with the participation of state bodies and volunteer groups.

Lastly, a number of prizes will be awarded: the ‘Giuseppe Zamberletti Trophy’ for fire-fighting and civil protection, the ‘Driver of the Year Trophy’ for emergency vehicle drivers, the ‘Rescue Dog Trophy’ for civil protection dog units, and the ‘Photograph the Emergency in Safety’ photography competition.

“REAS” is organised by the Montichiari Exhibition Centre in partnership with Hannover Fairs International GmbH and “Interschutz”, the world’s leading specialist trade fair that takes place every four years in Hannover (Germany).

Admission is free and open to all, subject to online registration at this link: https://coupons.wingsoft.it/events/REAS/ .

Further information is available at www.reasonline.it.

How to recognise the symptoms of meningitis in children? Paediatricians explain