Africa: too expensive ambulance supply from Zambia to Malawi blocked. Investigations on their way

The Anti-Corruption Bureau (ACB) allegedly has suspended the supply of 35 ambulances from Zambia (Grandview International, in particular) approved by the Ministry of Health of Malawi.

The Human Rights Defenders Coalition of Malawi has written to that country’s Anti-Corruption Bureau over allegations of corruption in the supply of ambulances by the Ministry of Health.

Ambulance supply from Zambia to Malawi: a too expensive deal blocked

According to the Lusaka Times, the Zambian company Grandview International made headlines when it supplied 42 Fire trucks at a cost of 42 million US dollars.

In the Human Rights Defenders Coalition of Malawi official letter dated, September 10, 2020, they stated that in their ongoing initiative they had received information that they wished to share with the bureau.

After the notification that the Human Rights Defenders Coalition of Malawi received, Grandview was on number 4 and over $25,000 higher than Toyota Malawi for the cost of ambulance fleet supply, and that apart from being cheaper, Toyota Malawi also offered two years of free service of the vehicles. However, Grandview International offer was the winner of the deal.

Grandview seemed to be the subject of an investigation by the Anti-Corruption Commission in Zambia in their supply of 42 Fire Trucks at $1 million each. The Human Rights Defenders Coalition of Malawi admitted in the letter that Malawian companies were even cheaper so that they are surprised that this contract was awarded. They launched the call to the Anti-Corruption Bureau to start the investigations as soon as possible and report the reasons for this choice. 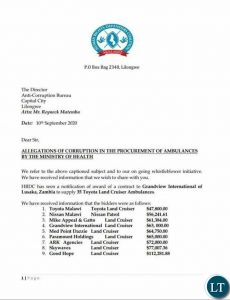 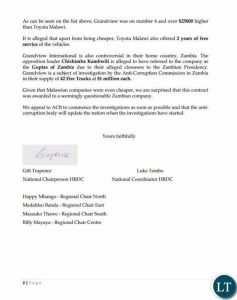 Which medical devices do you need for a high-quality…

Health in Swaziland, women risk cancer for the spread of…

Emergency Medical Technicians recruitment in the UAE: the…