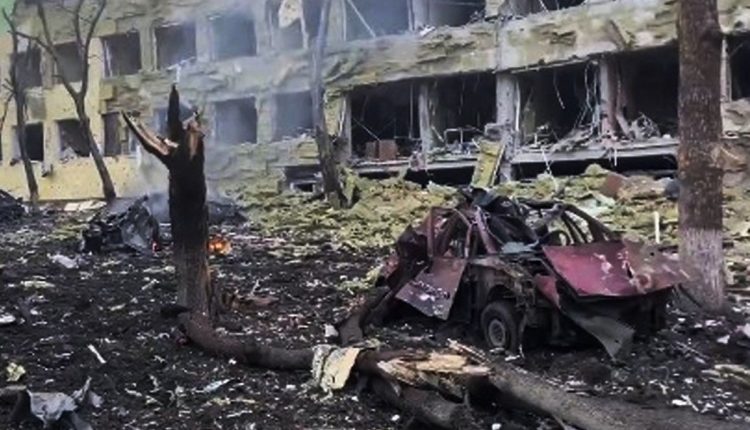 Mariupol Children’s Hospital: under the rubble, children with their mothers, as well as those working in the paediatric clinic. In the courtyard separating the various pavilions, a crater several metres deep left by a Russian bomb explosion

On the road, an ambulance riddled with bullets.

On Russian television, images of Putin talking about Nazis are repeated over and over again.

President of a Russia suffering from sanctions and heading for economic default, since its Central Bank is unlikely to be able to cope with a planned boycott of domestic oil.

And because major brands are unlikely to want to associate themselves with regimes that commit acts such as the murder of children, paediatricians, parents and nurses.

It’s only right. It is right that the violent should be punished for their actions.

Mariupol : “People, children, are still under the rubble”

President Volodymyr Zelensky and Ukrainian military officials today denounced a raid allegedly carried out by the Russian air force on a hospital in Mariupol, a port city on the shore of the Azov Sea where a ceasefire is supposed to be in effect as of this morning.

Zelensky posted on social networks a video of the interior of a facility devastated by bombing and wrote: “Direct attack on an Ostritic clinic. People, children, are still under the rubble. This is an atrocity. How long will the world be complicit, ignoring this terror?”.

Referring to a request for a no-fly zone for Russian aviation that Kiev has been putting forward for days, probably addressing the international community, the president added: “Close the sky now! Stop the killings. You have power but you seem to be losing humanity.”

In the video, a person filming the devastated interior of the hospital shouts “is anyone there?” but receives no response.

The raid was confirmed by Pavlo Kyrylenko, military chief for the Mariupol region.

The officer also shared photos and videos of the bombing, claiming that Moscow had ‘crossed the line of humanity’ with this raid.

Mariupol. Direct strike of Russian troops at the maternity hospital. People, children are under the wreckage. Atrocity! How much longer will the world be an accomplice ignoring terror? Close the sky right now! Stop the killings! You have power but you seem to be losing humanity. pic.twitter.com/FoaNdbKH5k

WESTERN REACTION TO THE BOMBING OF CHILDREN IN MARIUPOL: EU TIGHTENS SANCTIONS AGAINST RUSSIA AND BELARUS

The Council of the European Union decided today to further tighten sanctions against Russia and Belarus with measures against those involved in Moscow’s military offensive in Ukraine.

These include 14 Russian oligarchs and businessmen and their families, operating in key sectors of the economy (metallurgy, agriculture, pharmaceuticals and the digital industry) and 146 members of the Council of the Russian Federation, making a total of 160 people added to the EU’s blacklist, which currently has 862 people and 53 entities sanctioned.

Other measures include the exclusion of three Belarusian banks from the Swift system (Belagroprombank, Bank Dabrabyt and Development Bank), a ban on transactions with the Central Bank of Belarus, the provision of public funding for trade and investment in the country, and a ban on deposits exceeding 100,000 euros for Belarusian citizens in the EU.

On the Russian side, the EU has introduced further restrictions on radio communications and on maritime exports and added the Russian Maritime Register of Shipping to the list of companies with funding limits.

Ukraine, WHO Warns: ‘Attacks On Hospitals On The Rise’

Wrist and hand cysts: what to know and how to treat them

Covid, a tale of two years of pandemic through words