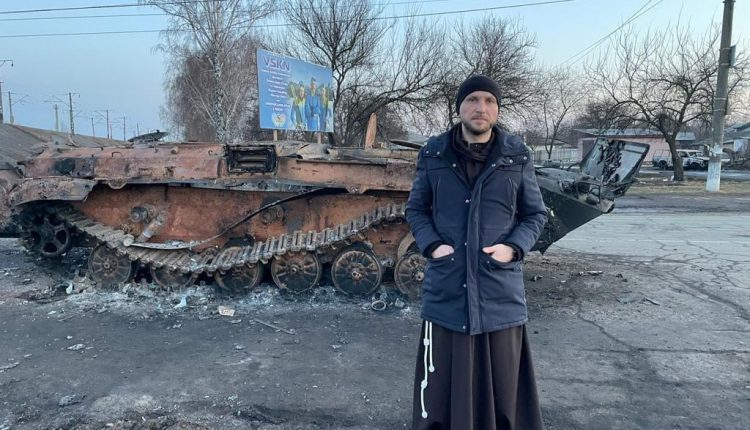 Safe places and hot meals, Franciscan friars on the front line in Ukraine

Franciscan friars at the service of the people, in Ukraine: the Antoniano has extended the solidarity network of “Operation Bread” to the Ukraine. In the meantime, Italy is preparing to welcome thousands of people fleeing the war

From the Franciscan friars an invitation to commitment: “I am very worried about my land, but now we just have to join forces to give our maximum support to the people of Ukraine”

The appeal comes from Brother Faustino, a Franciscan friar of Ukrainian origin from the Terrasanta friary in Bordighera (Imperia), who in these days is working to welcome families fleeing the war, mothers and children who have lost everything and need a place to sleep, a hot dish to eat and support for basic necessities.

At his side is Antoniano, which in these difficult days has extended the solidarity network of “Operation Bread” to Ukraine, with interventions in the country, at the borders and in Italy, where thousands of people fleeing the war are arriving. 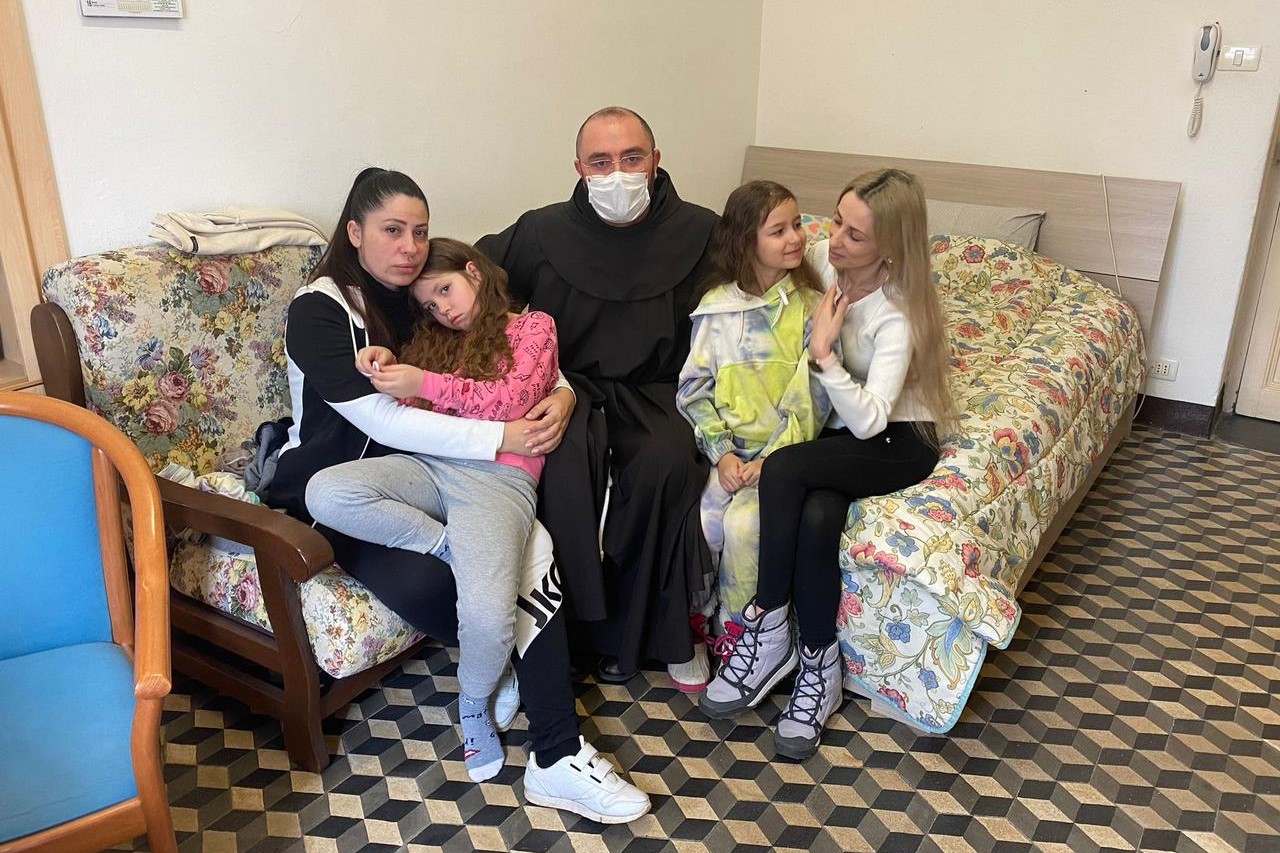 With “Operazione Pane”, Antoniano supports three structures run by Ukrainian Franciscan friars in Konotop, Odessa and Kiev and one in Romania that offers support to mothers and children crossing the Ukrainian border

In Italy, “Operation Bread” also helps the Franciscan realities that are welcoming Ukrainians, such as the friaries of Bordighera and Montenero, in the province of Imperia.

In the friary of Bordighera, adds Fr Faustino, four mothers have already arrived with six children aged between seven and 10 and one aged 16.

They come from Odessa: on 24 February they woke up to the noise and the lightning of the bombs, because they live near the airport, one of the first targets to be hit.

They hid in the basement of the city, but the situation was becoming more and more dangerous, so they decided to escape.

In 27 hours they covered 80 kilometres and reached the border with Moldova, from where they then reached Bordighera.

“I forgot to tell them that the railway passes nearby. As soon as they heard the sound of the train, they got scared,” says Brother Faustino.

THE FRIARS OF ANTHONY FOR UKRAINE: FOOD, MEDICINE AND NAPPIES

All of us have prepared ourselves to welcome the refugees in the best possible way,” continues the friar, “we have prepared the beds, organised the tables for eating, we are putting aside food supplies, medicines and nappies for the children.

In the next few days we expect the arrival of other people in the reception house at the Sanctuary of Montenero. Everything must be ready.

More and more people will arrive. In Bologna, too, the first Ukrainian families are arriving and Antoniano is working with local institutions and other organisations to guarantee a welcome to all, support in case of economic and material needs as well as assistance from the listening centre.

Two mothers have already arrived and five have been welcomed into Antoniano’s homes.

“We are in contact with the Franciscan realities in Ukraine and we are working to offer our help to the families that will arrive in the coming days.

We are receiving many requests and we are preparing to face this emergency, to give our support and help all those in need.

Everything must be ready to welcome them and give them a bit of serenity from the horror of war”, underlines fra Giampaolo Cavalli, director of Antoniano. 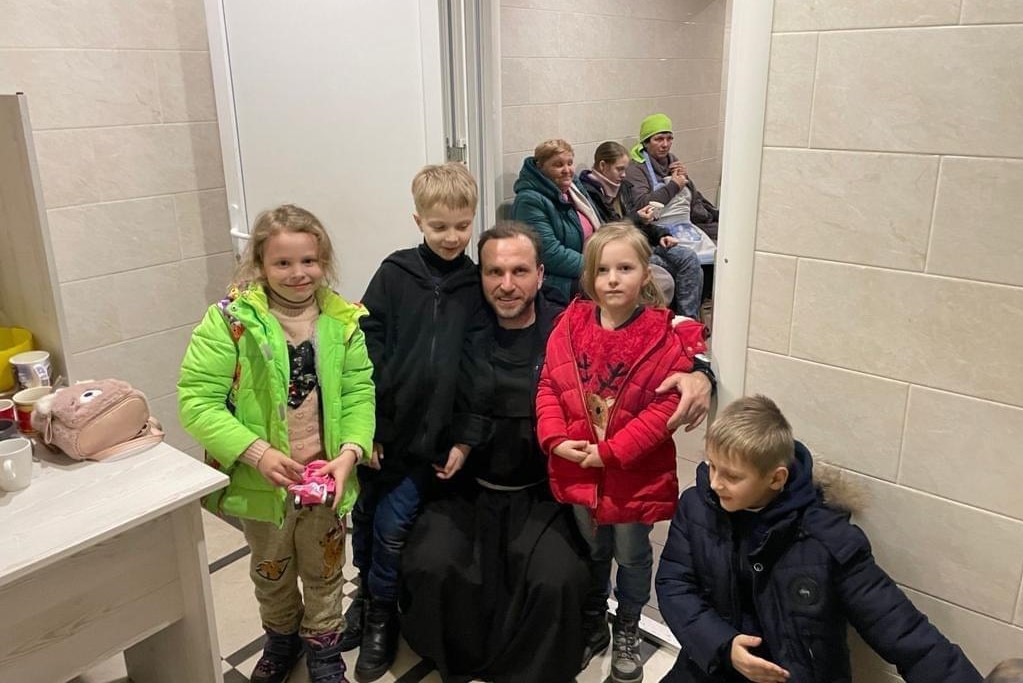 UKRAINE, THE FRIARS: WOMEN AND CHILDREN SLEEP IN THE CHURCH AT KONOTOP

Friar Faustino, together with Antoniano and as part of “Operation Bread”, is in continuous contact with the Franciscans who live in Ukraine and who in these days are assisting the many people who are seeking help and shelter.

For example, the convent of Our Lady of Fatima in Konotop, about 90 kilometres from the Russian border: there the friars immediately opened the doors of the church to civilians, mainly mothers and children, giving them a place to sleep safely and a hot meal.

Many elderly Ukrainians have remained in their homes, although badly damaged: the friars of Konotop go to them every day, bringing food and assistance.

“Finding resources for everyone is becoming difficult, food, medicine and everything necessary for those who are losing everything are becoming scarce”, the Franciscans explain.

In Odessa, together with other religious, they distribute a hot meal to hundreds of people every day.

Many families have been evacuated to safer areas where they continue to receive support from the Franciscans.

We are in continuous contact with our Ukrainian brothers, especially with the brothers in Kiev, Odessa and Konotop,” concludes Brother Faustino.

These days in Ukraine it is very cold and, besides food and shelter, there is a great need for anti-flu medicines.

From Italy we are helping our brothers in Ukraine so that no one is left alone”.

The situation is also very difficult at the moment in the countries bordering Ukraine, such as Romania, where many of the people who manage to escape are pouring in, especially from the western part of the country.

Here, there is the city of Braila, where Sister Nicoleta and her sisters from Mariele’s House of Smiles are a reference point for mothers, children and elderly people who manage to escape.

Supported by “Operation Bread”, they offer food but also psychological support; they network with other associations that can intervene to help women and children tried by the war.

They also organise courses, workshops and moments of leisure in which the children can find a safe place to play and the mothers can learn the Romanian language, so that they can integrate into their new environment in the best possible way.

DO YOU WANT TO KNOW MORE ABOUT THE MISSIONS IN THE WORLD? VISIT THE FONDAZIONE SPADONI BOOTH AT EMERGENCY EXPO

THE FRANCISCAN FRIARS IN UKRAINE: “WE WILL NEVER FORGET 24 FEBRUARY 2022”.

Giampaolo Cavalli, director of Antoniano, concludes: “February 24, 2022 is a day that we will never forget – the newspapers report news that seems to belong to a distant time: Russia invades Ukraine.

Missiles on Kiev, tanks at the entrance to Lviv, long lines of civilians running away.

My thoughts go to them, to the thousands of families, to the children in hospitals, to the fathers, to the young Ukrainians and Russians forced to leave their families to fight a war they did not choose.

Hundreds of thousands of people have been displaced and are seeking shelter in another country.

Those who are still in their homes often have no water or electricity.

These people are part of us, they cannot be left alone.

Everyone can do their part.

Now, more than ever, we must help them”.

To help the Franciscan organisations that are supporting the Ukrainian population in the country, in Italy and at the borders, Antoniano has launched a fundraising campaign.

Xaverian Missionary: In Congo, Covid Is There “But Not Visible”

AMBU: the impact of mechanical ventilation on the effectiveness of CPR

Greenstick fractures: what they are, what the symptoms are and how to treat them