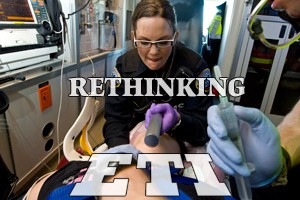 Should paramedics continue to intubate?

On a cool fall evening, an ambulance and engine company are dispatched to assist a 44 year old male who is having difficulty breathing. The dispatcher reports that the patient has a history of asthma. The ambulance is staffed by an EMT and a paramedic, and all members of the engine company are EMTs. On arrival, they find the patient seated on a couch in the living room with a nebulizer treatment under way. The crew immediately realizes that the patient is extremely fatigued and respiratory failure is imminent.

The sole paramedic on scene reacts quickly and begins administration of 100% oxygen and changes the patient’s room-air-driven nebulizer to an oxygen-driven nebulizer. He begins to administer levalbuterol (Xopenex) and ipratropium (Atrovent). However, the patient’s condition worsens, and the EMTs find it necessary to begin to assist respirations with a bag-valve-mask (BVM) device.

The paramedic opens the airway bag and prepares to intubate the patient. An 8.0 mm endotracheal (ET) tube is selected and removed from the packaging, and the cuff is checked and readied. The patient is moved to the floor and mechanical ventilation continued. Finally, when ready, the paramedic positions the patient and inserts the laryngoscope. The patient starts to gag and reaches for the paramedic’s hand. The paramedic grabs the ET tube and inserts it into his airway. He then holds the tube in place, inflates the cuff, and the EMTs remove the mask from the BVM and begin ventilating through the ET tube.
Immediately, vomitus fills the tube and begins to leak out. The paramedic quickly deflates the cuff and removes the ET tube. The mask is replaced on the BVM unit, and the patient is ventilated for approximately one minute. Then, the paramedic selects a second ET tube, prepares it and makes a second attempt to intubate the patient. As soon as the tube is placed, EMTs again remove the mask from the BVM and begin ventilating the patient through the ET tube.

Approximately a minute later, the EMT states, “There’s something wrong with the monitor.” The paramedic quickly checks the monitor and re-checks placement of the ET tube. He says, “Looks like the monitor’s not working. But the breath sounds are good, so let’s go ahead and get this guy to the hospital.” The patient is then moved to the ambulance and transported to St. Joseph Hospital with mechanical ventilation continued.
On arrival in the emergency department (ED), one of the emergency physicians on duty immediately evaluates the patient and checks for breath sounds. He doesn’t hear breath sounds over the chest but does hear gurgling sounds over the stomach. He grabs a laryngoscope and visualizes the larynx. He observes that the ET tube is in the esophagus. He then immediately deflates the cuff, removes the tube and suctions the airway. Mechanical ventilation is again resumed with a BVM.

The physician reaches for a new ET tube and intubates the patient. As soon as the tube is placed, he inflates the cuff and begins ventilating the patient. The patient’s color rapidly improves, and breath sounds are heard over the chest. The capnography sensor is applied, and a waveform is immediately observed on the monitor, indicating proper placement of the ET tube. By this time, however, the patient is in cardiac arrest.

Resuscitative efforts are started and continued for approximately an hour. Multiple medications and other treatments are administered. However, the patient fails to respond and is pronounced dead approximately 57 minutes after arrival at the ED.

The physician completes an EMS risk-management form documenting the improper placement of the ET tube and has it faxed to the EMS system’s medical director. After receiving this, the medical director schedules remedial education on airway management for the paramedic on the call. The monitor used on the call is taken out of service and evaluated by a manufacturer’s representative. It’s found to be functioning normally.
Approximately six months later, the paramedic, the EMS system medical director and the EMS service receive notice that they’re being sued for medical negligence by the family of the patient. During the discovery process, it’s learned that the respiratory therapist on duty when the patient arrived at the ED was a friend of the patient’s family and revealed to them that the prehospital ET tube was improperly placed by the paramedic and this led to the patient’s death.

The legal process moves slowly, and approximately one year after the patient’s death, depositions begin. During the paramedic’s deposition, it’s revealed that he had only performed one intubation on a human patient during paramedic school. Since graduating from paramedic school approximately two years prior to the incident, he has attempted intubation on a total of five patients with only three successes. His paramedic instructor from the local community college is subpoenaed and, during his deposition, reports that it was very difficult for his students to gain access to local hospitals to practice intubation, explaining that students simply learned the procedure on manikins.

Expert witnesses for the plaintiff point out that the paramedic’s care fell below the expected standard of care of a prudent paramedic. They feel that his paramedic education program, specifically as related to airway management, was inadequate. They also feel that the EMS system medical director was negligent in allowing the paramedic to practice with such a limited education, and they argue that the EMS system was negligent in not properly assessing and monitoring the capabilities of paramedics before authorizing the performance of such high-risk skills as intubation.

Finally, almost two years after the patient’s death, the case is set for trial. Approximately two weeks prior to trial, the EMS system’s insurance company agrees to settle the case for $2.4 million. Fortunately, as part of the settlement agreement, the plaintiffs agree to drop the paramedic and the medical director from the lawsuit. But, after the case is settled, the EMS regulatory agency for the state opens an investigation and subsequently finds that the paramedic and the EMS system failed to maintain an acceptable standard of care, and both are fined.

Heat Shield, the uniqueness of the SOGDA devices