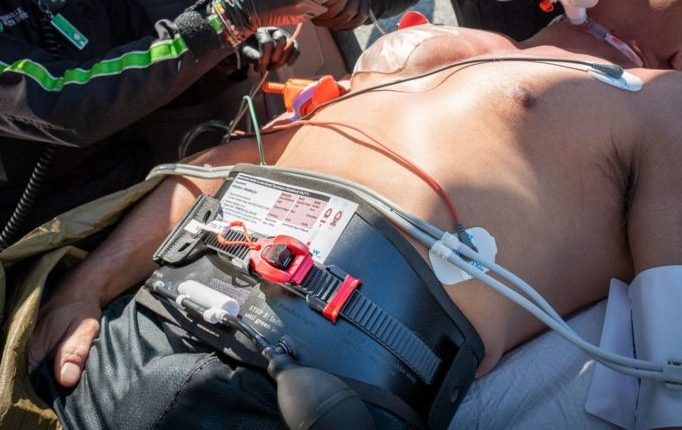 Abdominal tourniquet as an alternative to REBOA? Let's find out together

The military abdominal tourniquet is equal in efficiency to REBOA of the aorta: this is what emerges from a debate and trials on this subject

A tourniquet can save a victim’s life during a conflict.

However, injuries in the axillary or inguinal region, as well as haemorrhages in the pelvic area, can be particularly dangerous and insidious to treat, due to the massive bleeding that characterises them.

A major problem in prehospital rescue.

RESCUERS’ RADIO IN THE WORLD? VISIT THE RADIO EMS BOOTH AT EMERGENCY EXPO

Since 2012, the Aortic and Abdominal Junctional Tourniquet™ (AAJT) has been actively used in military medicine.

An independent study has shown that an abdominal tourniquet effectively interrupts blood flow to the pelvis and extremities, thus saving the lives of patients at risk of massive bleeding.

The developers of the AAJT were guided by the combat experience of the Iraq campaign.

The basis for creating a tourniquet was the traditional technique used to stop heavy bleeding below the waist by pressing the knee into the centre of the abdomen to compress the aorta.

In 2012, the device received FDA approval and went on to equip US and British special forces.

Principle of operation of the abdominal tourniquet

The main advantages of the device are simplicity and speed – installation takes about 1 minute.

On the abdomen, the tourniquet can be safely fixed for up to 60 minutes and in the inguinal or axillary region for up to 4 hours.

The tourniquet wraps around a sufficiently large area of the body, which increases its stability, and the valve-controlled pressure, which does not exceed 300 mm Hg, reduces the risk of tissue necrosis under compression.

The tourniquet was first successfully used in 2013 in Afghanistan on a soldier who lost both legs and suffered severe pelvic injuries after an IED explosion.

Thanks to the use of AAJT, it was possible to save his life.

In animal studies, AAJT has been shown to be equivalent to REBOA in zone 3.

It has also been shown that in traumatic cardiac arrest, the use of an abdominal tourniquet in combination with CPR and blood transfusion increases patient survival by up to 83%.

In comparison, the survival rate for isolated CPR with blood transfusion is only 17%.

A modification of AAJT has been developed for use in civilian prehospital settings and hospital emergency departments for temporary stabilisation of the patient until the time of surgery and REBOA.

T. Or No T.? Two Expert Orthopaedics Speak On The Total Knee Replacement

Tourniquet, A Study In Los Angeles: ‘Tourniquet Is Effective And Safe’

The Barthel index, an indicator of autonomy

Wrist and hand cysts: what to know and how to treat them

Difference between AMBU balloon and breathing ball emergency: advantages and…