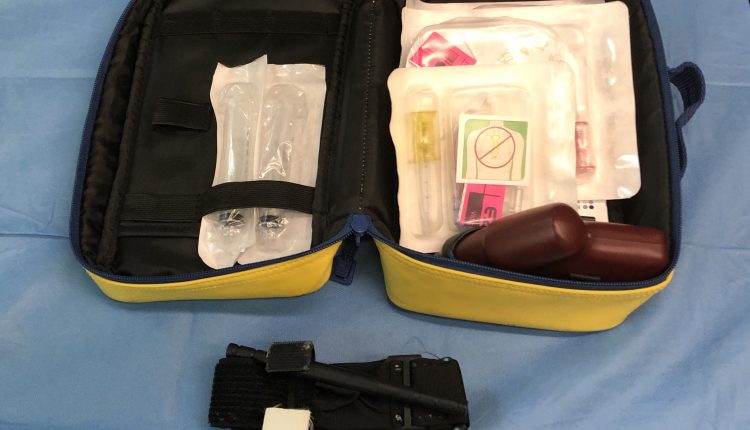 In case of massive bleeding, timely control of the bleed and immediate vascular access can make the difference between life and death of a patient. In this article, we will report an Italian case study on the use of a tourniquet and intraosseous access.

The emergency care system 118 of Trieste (Italy) has decided to assign the EZ-IO® intraosseous access device to all ALS ambulance services of the area. The aim is to equip ambulances in case of severe bleeding and to train medical practitioners working in the prehospital setting in the management of massive junctional and limb haemorrhages. They joined the “Stop the bleed” campaign, promoted by the American College of Surgeon and imported into Italy by the Società Italiana di Chirurgia d’Urgenza e del Trauma (Italian Society of Emergency Surgery and Trauma). The use of a tourniquet and intraosseous access can mean an important changing in treating such complicate bleeding.

Every year, trauma is responsible for a significant percentage of mortality worldwide. The World Health Organization estimated that in 2012, 5.1 million people died because of traumatic events, which is like 9.2% of deaths worldwide (mortality rate verified in 83 cases per 100,000 inhabitants). 50% of the deaths were between the ages of 15 and 44, with a male mortality rate twice that of women(1).

In Italy, trauma events are responsible for 5% of total annual deaths (2). It corresponds to about 18,000 deaths, of which:

Many are caused by over 1 million hospital admissions, equal to about 10% of total annual admissions (3).

Haemorrhagic shock is the second leading cause of death after central nervous system injuries, regardless of the mechanism 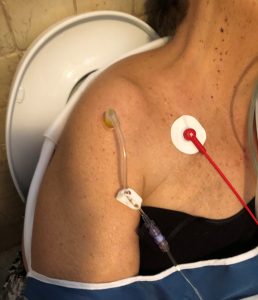 In order to be more effective as possible, the haemorrhage treatment has to be provided as soon as possible after the damage occurs. Massive bleeding can quickly lead to so-called “trauma triad of death” or “lethal triad”: hypothermia, coagulopathy and metabolic acidosis.

Massive bleeding decreases oxygen transport and can cause hypothermia with consequent alteration of the coagulation cascade. In the absence of oxygen and nutrients normally transported by the blood (hypoperfusion), cells switch to anaerobic metabolism, causing the release of lactic acid, ketone bodies and other acidic components that lower the blood pH causing metabolic acidosis. Increased acidity damages tissues and organs in the body and can reduce myocardial performance by further compromising oxygen transport.

From the conflicts in Iraq and Afghanistan, we have learned that the immediate use of a tourniquet and hemostatic bandages are essential in life-saving manoeuvres. A very efficient way of responding, deeply studied by the US Army’s Committee on Tactical Combat Casualty Care (C-TCCC). The implementation of the TCCC guidelines has led to a significant reduction in the number of extremity haemorrhage deaths (5).

Thanks to a deep experience developed at a military level, these methods of treatment have begun to spread also in the civil setting, above all, following terrorist attacks such as that occurred during the Boston Marathon in 2013 (6).

Quick life-saving actions for the control of the haemorrhages by first responders, bystanders included, can mean a crucial point in the reduction of preventable deaths (7). In the United States, one of the strategies that have proven effective in reducing massive haemorrhage mortality has been to equip both health care personnel and first responders (police and firefighters) with haemorrhage control devices and training (8).

In common and daily emergency medical services, the compression bandage used in massive haemorrhage is often inadequate. It is effective only when direct manual compression is carried out, which cannot always be guaranteed in the event of multiple injuries or maxi emergencies (5).

That’s why many emergency organizations use a tourniquet. It has only one purpose: prevent hemorrhagic shock and massive bleeding out of a limb. It has been scientifically proven that its application is undoubtedly life-saving. Patients who experience traumatic hypovolemic shock have a statistically severe prognosis with low survival rates. Collected evidence in the military field has shown that injured people to whom tourniquet was applied before the onset of hypovolemic shock have a survival rate of 90%, compared to 20% when the tourniquet was applied after the first symptoms of shock (9).

Early use of tourniquet reduces the need for volemic reintegration with crystalloids in an extra-hospital environment (haemodilution, hypothermia) and hemoderivatives in a hospital environment (coagulopathies), avoiding further worsening the factors involved in the lethal triad (10).

During the Vietnam conflict, 9% of deaths were caused by bleeding. In today’s conflicts, it has been reduced to 2% thanks to training on the use of a tourniquet and its widespread diffusion. The survival rate among soldiers treated with tourniquet vs. those in which it was not applied is 87% vs. 0% (9). The analysis of 6 international studies reported an amputation rate of 19% of the limbs involved.

We have to consider 6 hours as the maximum limit for limb survival (15). The “Stop the Bleed” campaign was promoted in the U.S. by a working group among various agencies convened by the Department of Homeland Security of the “National Security Councill Staff” of the White House, with the objective of building resilience among the population by increasing awareness of the basic actions to stop life-threatening bleeding caused both by accidental events of everyday life and by disastrous events of a natural or terrorist nature.

The “Committee on Trauma” of the American College of Surgeons and the Hartford Consensus are among the main promoters of this campaign. Uncontrolled bleeding is considered the leading cause of death preventable by trauma, while the cornerstone of timely intervention is the use of bystanders as first responders to manage massive bleeding until the arrival of professional rescue, after having ascertained that the intervention is effective within the first 5-10 minutes.

The practitioners of 118 Trieste system took part in the “Stop the Bleed” course, imported into Italy by the Società Italiana di Chirurgia d’Urgenza e del Trauma. The aim is to standardise behaviour on the correct use of the tourniquet, currently available on all the Province’s rescue vehicles.

In the pre-hospital setting, it is often essential to ensure rapid vascular access, but the positioning is often 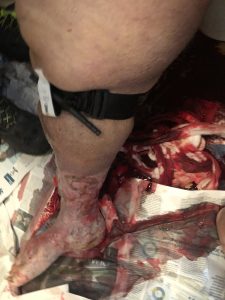 problematic (16,17). Peripheral venous access remains the standard, but if vital functions are compromised, its retrieval may be difficult or it may take too long.

Victims of trauma with increased dynamics, cardiac arrest or sepsis may require immediate vascular access.
In pediatric patients, obtaining vascular access may be technically difficult (18). The success rate in positioning peripheral venous access at the first attempt outside the hospital is 74% (19.20) and is reduced to less than 50% in case of cardiac arrest (20). Patients in hemorrhagic shock require, on average, 20 minutes to obtain peripheral venous access (21).

The European Resuscitation Council also recommends intraosseous access as a valid alternative in case of failure to find the peripheral vein in the adult patient (25) and as the first choice in the pediatric patient (26).
As of April 2019, the EZ-IO® Intraosseous Access System was made operational on all ASUITS 118 Advanced Rescue Ambulances after training of nurses and dissemination of operating procedures, previously only the self-medication system was equipped.

The diffusion of the control to all ambulances makes it possible to quickly guarantee vascular access, reduce treatment times and further increase the quality of services for citizens. Several studies have shown that EZ-IO® is an effective intra-osseous access retrieval system: the overall success rate is very high (99.6%27; 98.8%28; 90%29) as well as the success rate at the first attempt (85.9%27; 94%28; 85%23) and is characterized by a very fast learning curve (29). Intraosseous access is equivalent to peripheral venous access in terms of pharmacokinetics and clinical efficacy (30) and the complication rate is less than 1% (24).

About the intraosseous access and the use of tourniquet, case report

6.35 pm: the 118 Trieste system was activated by the FVG Regional Emergency Medical Operations Room to respond to a traumatic yellow code at home.

6.44 pm: the ambulance arrived on site and the crew was accompanied by the patient’s relatives in the bathroom. A 70-year-old obese woman, sitting on the toilet and unconscious (GCS 7 E 1 V2 M 4). Snoring breath, pale, diaphoretic, barely perceptible carotid pulse, capillary refill time > 4 seconds. A large blood slick at the feet of the patient; vascular ulcers were evident in the lower limbs and a towel, also soaked in blood, was wrapped around the right calf.

6.46 pm: red code. Self-medication was requested and they had to call for fire brigade assistance to assist the transport of the patient, considering her weight condition and the limited space available. When the towel was removed, a haemorrhage from a probable vascular rupture was detected in the ulcuscruris, located in the posterior part of the calf.

It was impossible to guarantee effective direct compression and to dedicate an operator for this purpose. So, they immediately applied the Combat Application Tourniquet (C.A.T.), stopping the bleeding. After that, no other hemorrhagic mouths were detected.

The head was hyper-extended and applied O2 with 100% FiO2 with the disappearance of snoring breath.
Given the state of shock and obesity, it was impossible to find peripheral venous access, so, after the first attempt, intraosseous access was placed in the right humeral chamber with EZ-IO® system with a 45mm needle.

The correct positioning of the access was confirmed: needle stability, serous blood aspiration and ease of infusing the 10 ml SF push. Physiological Solution 500 ml infusion with bag squeezer was started and the limb was immobilized with a mitella. When ECG monitoring was placed, 80 rhythmic HR, PA and SpO2 were not detectable.

A compressive medical dressing was then applied at the bleeding point. A rapid anamnestic collection showed that the patient was suffering from hyperthyroidism, arterial hypertension, dyslipidemia, OSAS in nocturnal CPAP, atrial fibrillation in TAO. She was also followed by Plastic Surgery and Infectious Diseases for lower limb ulcers with dermohypodermite by MRSA, P. Mirabilis and P. Aeruginosa and in therapy with tapazole 5mg 8 hours, bisoprolol 1.25mg h 8, diltiazem 60mg every 8 hours, coumadin according to INR.

Given the improvement in vital parameters, analgesic therapy was performed with fentanest 0.1mg and a total of 500ml of saline and 200ml of ringeracetate were infused. At 7.25 p.m. the ambulance, with the doctor on board, left in code red to the Cattinara Emergency Room.

Surgeon, resuscitation department and blood bank were alerted. The ambulance arrived in PS at 7.30 p.m.
The first blood count showed: haemoglobin 5 g/dL, red blood cells 2.27 x 103µL, haematocrit 16.8%, while for coagulation: INR 3.55, 42.3 seconds, Ratio 3.74. The patient was admitted to emergency medicine and underwent hemotransfusions for a total of 7 units of concentrated hematocrits and antibiotic cycle with dalbavancin and cefepime.

Tourniquet or no tourniquet? Two expert orthopaedics speak on the total knee replacement

Tactical Field Care: how should paramedics be protected to face a war field?