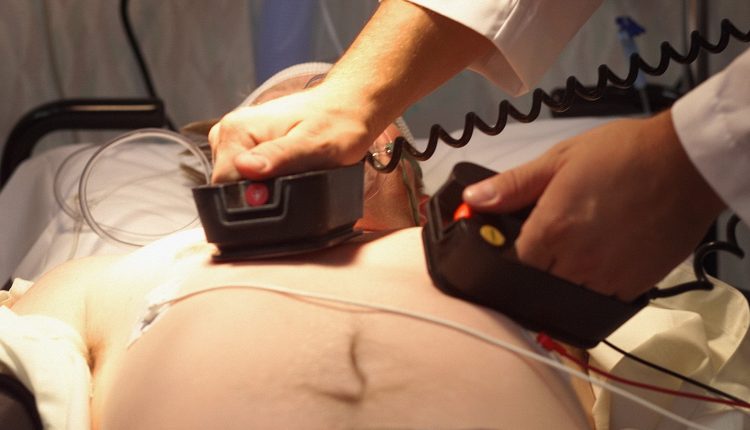 Cardioversion is a special procedure that is carried out in the medical field when a subject has an arrhythmia, i.e. an alteration of the normal cardiac rhythm (sinus rhythm), in order to restore it while avoiding dangerous complications that can even lead to the patient’s death

Cardioversion can be performed in three ways

The operator administers the precordial fist on the sternum at heart level, immediately withdrawing the hand (not leaving it resting on the patient’s chest).

The mechanical energy imparted by the fist should convert into sufficient electrical energy for cardioversion.

This manoeuvre should be performed in cases of cardiac arrest where a defibrillator is not available, i.e. in extreme emergency situations.

In rare cases it has actually allowed ventricular fibrillation or ventricular tachycardia to be converted into an effective heart rhythm, but more frequently it is ineffective or can even cause an opposite conversion, ultimately leading to asystole, which further aggravates the situation.

This procedure involves a relative latency of effect, i.e. a certain period of time elapses between the administration of the drug and the disappearance of the arrhythmia.

It is therefore reserved for arrhythmias that are well tolerated, either because the arrhythmia itself is benign, or because the patient is in good physical condition.

The drug, chosen according to the mechanism that sustains the arrhythmia, can be administered orally or by intravenous injection, according to predetermined dosages.

Particularly in cases where the arrhythmia is life-threatening (e.g. in ventricular fibrillation, which occurs in cardiac arrest) because it produces a serious haemodynamic compromise, electrical cardioversion is preferred to pharmacological cardioversion, which is extremely rapid and effective in many cases in interrupting cardiac malfunction, which if protracted would lead to the patient’s death.

The restoration of normal sinus rhythm is brought about by the application of an electrical stimulus, which has a virtually immediate effect.

As mentioned earlier, electrical impulses are administered in two ways, via

Cardioversion with shock and anaesthesia

In common practice, the electric shock administered with an external defibrillator can be applied in a synchronised manner with the patient’s ventricular activity, such as for persistent atrial fibrillation: in this case, since the patient is conscious and the electric shock is extremely uncomfortable, the procedure is only performed after general anaesthesia.

In emergency cases, on the other hand, e.g. in the case of ventricular fibrillation (cardiac arrest), the patient is already unconscious and the discharge is administered unsynchronously and without any anaesthesia: in this case we speak of defibrillation.

Monkeypox, 202 new cases reported in Europe: how it is transmitted

What is percutaneous thermoablation of tumours and how does it work?