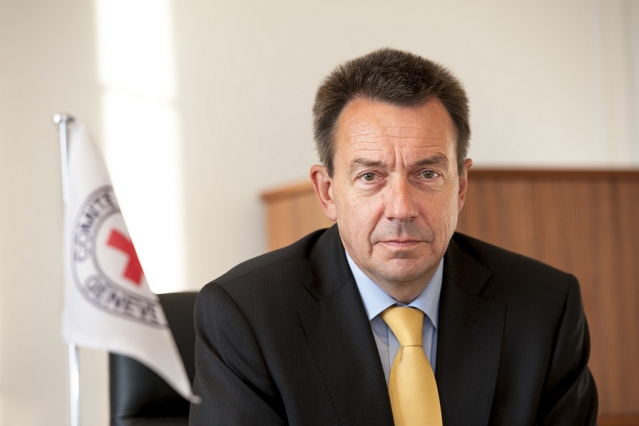 During his visit, Mr. Maurer engaged with officials on the impact of US military operations on civilians and he discussed the US detention facility at Guantanamo Bay as part of the ICRC’s ongoing confidential and bilateral dialogue with the US authorities on protection-related matters. He also discussed migration in the Americas with the US Department of Homeland Security.

Throughout his visit, Mr. Maurer shared his impressions of the civilian suffering and growing humanitarian needs in Syria and Afghanistan following recent trips to both countries. “These types of complex conflicts lead to fragility, instability, underdevelopment and unemployment – all of which are drivers of displacement,” he said. “Having also recently spent time in Greece, I can confirm that it’s no coincidence that we are seeing record numbers of migrants, refugees and asylum seekers fleeing their homes at the same time that we are seeing an increasing number of prolonged conflicts in the world.”

Mr. Maurer says now is the time for all nations, including the US, to reaffirm their commitment to ensure better global respect for international humanitarian law and to reduce the vast human suffering caused by armed conflict and violence worldwide.

“We need innovative solutions, new thinking, more agility, and enhanced partnerships and cooperation between governments, aid agencies, international financial institutions and the private sector in order to deal with the systemic consequences resulting from today’s wars and violence,” he said, adding that he hoped the World Humanitarian Summit taking place in Istanbul next month would provide an opportunity for world leaders and humanitarian actors to do just that.

However, he added that “humanitarian relief alone won’t resolve the world’s conflicts. Only political solutions and enhanced diplomatic efforts can bring lasting peace.”

Lithotomy position: what it is, when it is used and what advantages it brings to…