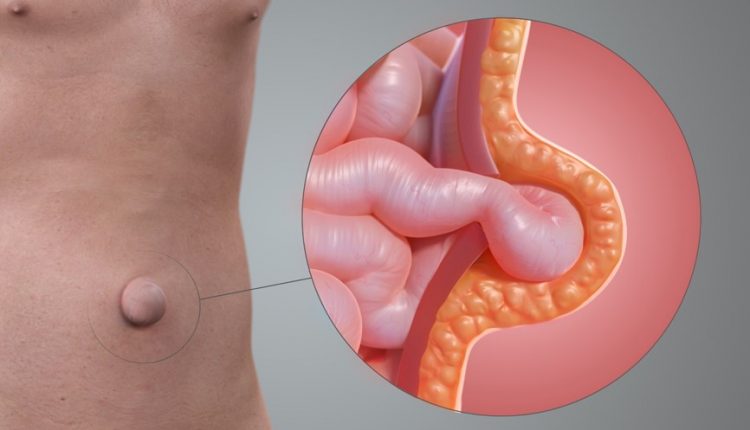 Umbilical hernia is the leakage from the abdominal cavity, through the umbilicus, of part of the intestine, intestinal fat (omentum) and/or the sac that covers the intestine (hernia sac)

In general, it is a pathology that is already evident to the naked eye, however it may be physically less evident, but it generates pain and discomfort.

How umbilical hernia manifests itself

Umbilical hernia generally presents itself without any particular clinical manifestations, apart from the visibility of a swelling in the area of the umbilicus, which becomes more swollen when undergoing physical exertion, while it shrinks and recedes when lying down or with manual manoeuvres.

Umbilical hernia, symptoms to watch out for

However, in more advanced forms of the pathology, there may be certain symptoms to pay attention to:

In the vast majority of patients, umbilical hernia remains an asymptomatic or mildly disabling condition, but in some cases, mainly among adults, it can lead to very serious complications:

Umbilical hernia is a very frequent pathology in newborns in which it can present itself as a congenital or neonatal hernia: the umbilical cord, severed at the level of the umbilicus, continues to protrude slightly under the skin of this area, leaving a small space of communication with the abdominal cavity, which is therefore not completely closed.

In the newborn this pathology tends to regress and resolve spontaneously.

It should be noted, however, that in both children and adults, umbilical hernia can also occur later as a result of certain circumstances.

As mentioned, the most frequent cause of umbilical hernia for infants is incomplete closure of the umbilical canal, while in childhood or adulthood it is facilitated by factors such as

These risk factors, which under normal conditions do not lead to a herniated pathology, in umbilical hernia sufferers are associated with a weakness of the tissues due to a metabolic problem with the collagen fibres that makes them more susceptible to increased pressure in the abdominal cavity.

Diastasis of the rectus abdominis muscles

This distancing, which is very frequent, for example, after childbirth, creates the effect of a swollen abdomen that remains so despite exercise, which, if inadequate, can even worsen the clinical picture.

Can an umbilical hernia recur?

A question that is often asked is whether the umbilical hernia can recur and resolve.

The professor’s answer is no: it can re-enter temporarily if lying down or if reinserted manually, but it is basically a hole that, except in the case of newborns, cannot close by itself, but can, at best, remain stable.

The treatment of umbilical hernia

The only treatment for an umbilical hernia is surgery.

If the hernia does not cause any problems, does not grow and does not cause pain, the operation is performed on an aesthetic basis, whereas if there is also discomfort and clinical reasons, it also acquires a functional basis.

The operation for every type of hernia

Each hernia has its own characteristics that provide for a more suitable and effective approach:

The post-operative: when to resume your regular life

In minimal operations under local anaesthesia, the patient can generally return to his normal life as early as the day after the operation.

In the case of operations under general anaesthesia, on the other hand, 1/2 day hospitalisation is required, but overall, within 1 week, subjects resume a regular life with sports activities that can be practised gradually as early as 8/9 days later.

There are, therefore, no particular post-operative precautions to follow, except for the use of compression bands that also help drain excess fluid.

What It Is And How To Recognise Abdominal Diastasis

What Is That Swelling? Everything You Need To Know About Inguinal Hernia