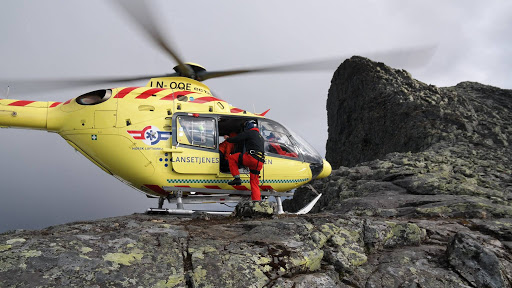 HEMS – an interesting study has been published in Norway regarding a problem that has also arisen in other countries: the location choice of helicopter rescue bases in a national territory in such a way that helicopter rescue can be used equally by the entire population.

No necessary say that each territory has its own geographical conformation, but, nonetheless, the need for response times for helicopter rescue operations that do not penalise one geographical area over another.

And so the study: “Introducing equity into the planning of the location of the Norwegian helicopter base” is suitable and interesting.

HEMS in Norway, abstract of the study published

A primary task of the Norwegian helicopter emergency medical services (HEMS) is to provide advanced medical care to the critical ill and injured outside of hospitals.

Where HEMS bases are located, directly influences who in the population can be reached within a given response time threshold and who cannot.

When studying the locations of bases, the focus is often on efficiency, that is, maximizing the total number of people that can be reached within a given set time.

The most efficient solution is thus typically not necessarily a fair one.

This study aims to incorporate fairness in finding optimal air ambulance base locations.

Methods in the development of the HEMS study in Norway:

We solve multiple advanced mathematical optimization models to determine optimal helicopter base locations, with different optimization criteria related to the level of aversion to inequality, including the utilitarian, Bernoulli-Nash and iso-elastic social welfare functions.

This is the first study to use the latter social welfare function for HEMS.

Study on HEMS base location in Norway, results

Including fairness by rather using an iso-elastic social welfare function in the optimization avoids leaving whole areas uncovered and in particular increases service levels in the north of Norway.

Including fairness in determining optimal HEMS base locations has great impact on population coverage, in particular when the number of base locations is not enough to give full coverage of the country.

As results differ depending on the mathematical objective, the work shows the importance of not only looking for optimal solutions, but also raising the essential question of ‘optimal with respect to what’.

The Origins Of Helicopter Rescue: From The War In Korea To The Present Day, The Long March Of HEMS Operations

Italy, Bologna’s Helicopter Rescue Service Turns 35: “And We’re Going To Get Even Better”.