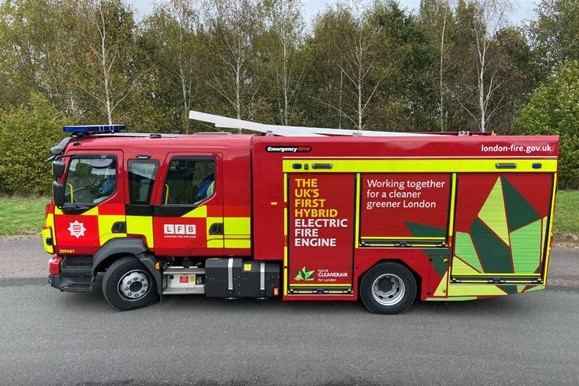 London Fire Brigade is investing in the development of an electric-hybrid fire engine as part of its commitment to significantly reduce carbon emissions, supporting the Mayor of London’s ambition for London to be net zero carbon by 2030 and build a greener and safer city for everyone

The Brigade is currently working with Emergency One, a UK manufacturer of specialist fire and rescue service appliances, to build a Zero Emission Capable Pumping Appliance (ZEPA1).

The Brigade is a leading voice in calls for innovation to help fire and rescue services and other organisations decarbonise their heavy fleets and it is hoped the project will help grow the market for zero emission specialist vehicles in the UK’s emergency services.

Developing zero emission solutions for fire engines is particularly challenging as they have demanding performance requirements – not only do these heavy vehicles have to attend incidents as soon as possible, but they also have to be able to pump water for long periods of time and transport equipment and machinery to deal with fires, flooding and other incidents.

This announcement comes during London Climate Action Week where there is a huge focus on finding new ways to create a sustainable Net Zero London.

It follows years of work to reduce the emissions from the Brigade’s fleet and support electric and hybrid vehicles.

A total of 96% of all the Brigade’s buildings have electric vehicle charge points, with 242 charging sockets.

A project is underway to assess the use of Hydrogenated Vegetable Oil in existing fire engines that are fuelled from the Brigade’s bulk fuel tanks.

It is expected that this could contribute a carbon emission saving of 24% from fleet fuel consumption.

This work is also being supported by a project on-going to replace the fleet of electric-hybrid cars with 50 fully electric vehicles.

“Our first priority is always to ensure the Brigade provides a first-class prevention, protection and emergency response service for London.

“But for some time we have been looking towards a more sustainable future and working to identify the challenges and solutions to ensure that we as a fire service can move to a zero emission fleet.

“ZEPA1 is a very big and exciting step for us and the whole of the UK fire service and we are incredibly proud to be part of the innovation that will lead to the UK’s first electric-hybrid fire engines at one of our fire stations.

“It is hoped that in leading the way on developing an electric-hybrid fire engine, the project will help drive and grow the market for zero emission specialist vehicles in the UK’s emergency services and particularly in the fire service.”

“I am passionate about tackling the climate crisis, which is why London is leading the world in taking bold action to reduce carbon emissions, with a commitment to make our capital zero-carbon by 2030.

I am determined to build a greener and safer city for everyone.”