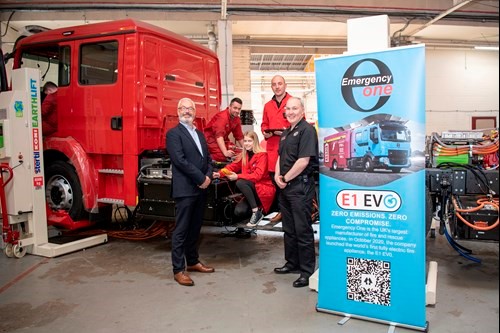 Scotland’s fire brigade: the fire and rescue service has received around £500,000 in funding from Transport Scotland to put into production the prototype of the country’s first electric fire engine

The contract to build the low carbon vehicle was awarded recently to Emergency One in Ayrshire.

The design and manufacturing of the appliance will fully comply with British Standards for firefighting and rescue service vehicles.

It will have the same capability and equipment as a diesel model and it will be able to assist at emergencies:

“We are excited to commission our first electric powered appliance with support from Transport Scotland.

“This innovative project is the first step in a long journey to discover how we can potentially move away from fossil fuel powered appliances.

“The Service has set out its environmental goals and we are committed to reducing carbon emissions from our fleet.

“There are already more than 100 electric cars within our light fleet, however this is our first venture into low carbon heavy duty vehicles.”

“This is a really exciting, innovative development and I’m pleased to be funding it through our partnership with Scottish Enterprise which is supporting the decarbonisation of Heavy Duty Vehicles across Scotland.

“The public sector should be seen to lead the way on this type of work, which demonstrates that tough operational requirements for service vehicles, often working in challenging conditions, can indeed be met without the sole reliance of fossil fuels.

“I look forward to seeing the electric fire appliance deployed in communities as a beacon not only for the journey that the fire service is on – but for Scotland’s wider transition to a net zero society.”

The host station of Scotland is still to be confirmed

Suitable locations for housing the charging infrastructure for the electric appliance are being scoped out.

“We are proud that the Emergency One E1 EV0™ (Electric Vehicle, Zero Emissions) is the world’s first all-electric pumping appliance fully certified to BS EN1846 standard.

“The EV0 exceeds the standard’s requirements for driving range and pumping performance at zero emissions, whilst the optional onboard smart charger provides resilience at protracted incidents.

“The EV0 as specified for SFRS carries the same inventory as a traditional pumping appliance, is one of the first of its kind in the UK, and the first to feature an innovative all-electric rear drive axle installation.

“Some of our staff who also work locally as retained firefighters have been able to work on this project and it’s great to get their practical operational insights throughout the design process.”

Scotland, SFRS has pledged to reduce its carbon footprint by six percent each year until 2030.

This project is part of the long-term goal to be carbon neutral by 2045:

“Scottish Enterprise has worked with Transport Scotland and the Scottish Fire and Rescue Service over a number of years through our Can Do innovation approach supporting collaboration with industry through the procurement process.

It is fantastic to see the project come to fruition and the fire service begin the journey towards the development and deployment of its first electric fire appliance.

“Emergency One is manufacturing this in Scotland and Scottish Enterprise has also supported this innovative company to develop its world leading technology.

Our vision is to help more public sector fleet owners to develop similar approaches as the decarbonisation of heavy duty vehicles is a key area of focus for Scottish Enterprise as we work to deliver a net zero economy.”

Treatment of bone fractures: some information for citizens