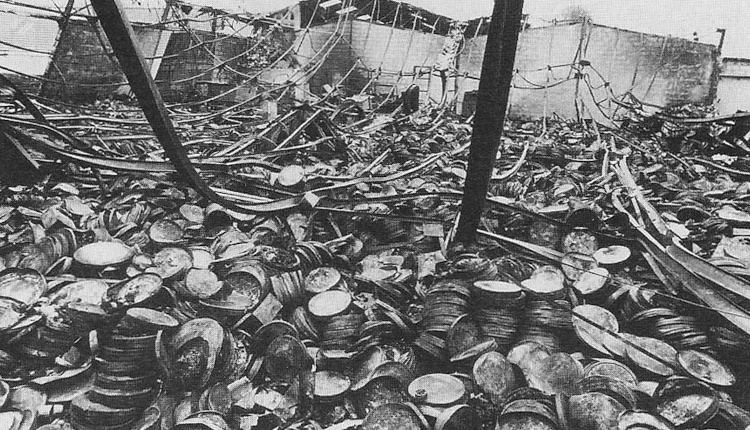 More than 40,000 reels of negatives and prints turned into ashes in the Vault Fire at the former 20 Century-Fox storage. When the Little Ferry firefighters arrived, it was too late and almost all the vaults were already burnt.

20 Century-Fox Vault Fire: how did the fire occur?

In 1937, the Northern New Jersey experienced a high heatwave in Summer, with daytime temperatures of 100 °F (38 °C) and warm nights. The building’s ventilation was inadequate to prevent a dangerous buildup of gases caused by the nitrate decomposition of film vaults due to the heat.

After 2:00 a.m. on July 9, spontaneous ignition occurred. It started at the building’s northwest corner. A local truck driver saw the fire and called the fire brigade through the fire alarm call box.

The driver attempted to awaken the residents in the neighborhood in the attempt to turning off the flames. However, the vaults in the south and east of the building contained a higher concentration of flammable gas and when the fire arrived at them, an explosion occurred.

The explosion damaged the brickwork and blowing out window frames. The fire reached the neighbor house and many people showed severe burns on their skin.

At 2:26 am, Little Ferry firefighters arrived first, followed by the fire brigades of Hawthorne, Ridgefield Park, River Edge, and South Hackensack. The fire took the efforts of 150 firefighters. However, despite 14 fire hose streams and so many firefighters at work, the fire was not extinguished until 5:30 am.

Total property damage was estimated at $150,000–200,000. Fifty-seven truckloads of films turned into ashes.

33 Years After Chernobyl Disaster – Firefighters And Volunteers, The Real Heroes Of The Incident

Fire Service Heritage In Australia – The Fire Museum Of Victoria

9/11 Attacks – Firefighters, The Heroes Against Terrorism