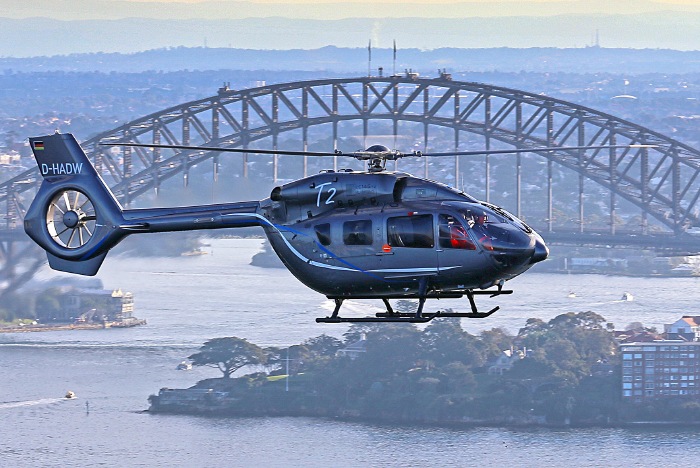 The H145 heads to Queensland in its Australia Demo Tour

Aircraft will now head north to Brisbane and greater Queensland, before wrapping up down south in Melbourne and Canberra  Total of 13 flights were performed in the first leg for a cross-section of civil and parapublic customers

Brisbane, 30 June 2015 – Brisbane and North Queensland regional centres are getting their first glimpse of the latest example of the world’s leading twin-engine helicopter in its class, the Airbus Helicopters H145. This classic example of advanced rotary-wing technology arrived in Brisbane at the weekend, having completed the Sydney component of its month-long Australia visit as part of a global tour. While in and around the Sydney region, the H145 was demonstrated to a wide cross-section of current and potential customers, including local hospitals, surf life savers and private aviators.

The H145 has an equally busy program in Brisbane and greater Queensland, before its national tour heads further north to Mackay, Townsville and the Whitsundays. It will return briefly to Brisbane before continuing south to Melbourne and Canberra, and leaving the country in late July. The H145 is the latest word in rotary-wing flexibility and innovation. Having evolved from the popular EC145 model, the advanced H145 series incorporates new Arriel 2E engines, a ground-breaking new digital avionics suite, and a 4-axis autopilot. Offering class-leading performance, flight safety, enhanced human-machine interface, maintainability and lower operating costs, it was certified in 2014 as the latest member of Airbus Helicopters’ 4-tonne, twin-engine product range.

With around 170 orders currently, the new H145 is winning over customers and becoming the best-selling, modern helicopter in its class. Commenting on the tour’s progress, Cedric Bessette Director Civil Helicopters, Airbus Group Australia Pacific noted the positive feedback received: “The potential for the H145 in our region is strong. Customers who flew the H145 were very impressed with the versatility, performance and power available, giving the H145 unrivalled operational capabilities with the highest level of safety. “Our customers commented on the quietness of the aircraft, as well as its ease of operation and multi-role capabilities. These qualities are thanks to the H145’s enclosed Fenestron® tail rotor and an automatic variable rotor speed control system which, together, reduce external noise while boosting payload and range.”

For multi-mission operators, the H145 can be reconfigured quickly and easily for a variety of different roles, including emergency medical services and police duties, aerial work and passenger transport for both business and private operators. And for more demanding operations, it can move workers and their equipment quickly and safely to remote locations, including off-shore oil drilling platforms and activities in rugged terrain. Updates on the H145’s Australian Tour will be posted to the company’s website: www.airbusgroupap.com.au.

REAS 2022, Formula Guida Sicura presents the tenth edition of the Driver of the Year…