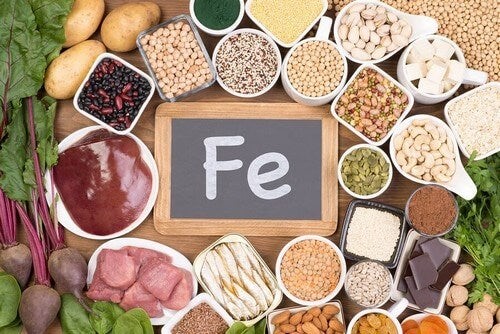 Among the most common forms of anaemia is iron deficiency anaemia, which can affect both men and women of all ages, with an increased incidence in children, adolescents and women of childbearing age or who are going through pregnancy and/or breastfeeding their newborns

Iron is an essential mineral for metabolic processes and therefore present in very high quantities in the body.

If its levels decrease, the consequence can be a lower oxygen supply in the blood, as it contributes to the formation of haemoglobin, but also alteration of numerous metabolic processes with consequences on the general well-being of the organism, the most typical manifestation of which is a strong sense of tiredness.

Iron deficiency anaemia can be caused by various factors, including absorption problems and an incorrect diet.

Iron deficiency anaemia: what is it?

Oxygen is an essential element for the well-being of our body and for healthy organs, muscles and tissues.

In particular, oxygen is transported in the blood thanks to a protein, haemoglobin: when this is lacking, because there is not enough iron to produce an adequate amount, iron deficiency anaemia develops.

This symptomatology depends on the weakening of the organism, resulting both from the lower oxygenation of the blood, but also from the alteration of numerous enzymatic reactions that depend on the presence of iron, leading to imbalances in the immune system, the thermoregulation system and the brain’s neurotransmission system.

What are the causes of iron deficiency anaemia?

Iron deficiency can result from various conditions and diseases.

The main risk factors for iron deficiency anaemia are pregnancy and breastfeeding, because at a time when the foetus is developing and the newborn baby is being fed, the woman needs a higher iron intake.

Iron deficiency can also be associated with haemorrhages, both external and internal and therefore not visible.

This is typical of certain pathologies, such as hiatal hernia, tumours, peptic ulcer, or polyp of the rectum, but also of physiological conditions such as the menstrual cycle.

Chronic intestinal diseases that interfere with metabolism, such as Crohn’s disease, ulcerative colitis or coeliac disease, and, likewise, those surgeries for which sections of the intestine have been removed or intestinal bypasses have been performed, can also cause anaemia.

Even in healthy individuals, an unbalanced diet in which foods that provide adequate iron intake are not present can lead to the development of anaemia.

Diet, however, is something that we can directly influence through our food choices.

Low iron: what to eat?

Haemic iron is absorbed very quickly by the body and in large quantities, while non-haemic iron is only 10% absorbed.

The foods richest in haemic iron are liver (which is in fact often given to children) and offal, but also more generally beef, pork, lamb, horse, chicken, turkey and guinea fowl provide an adequate supply of iron.

It should always be borne in mind that a diet rich in red meat can lead to an increase in cholesterol and be a risk factor for various diseases, and should therefore be followed under the supervision of a specialist dietician.

Among fish, on the other hand, the most useful foods in case of iron deficiency are crustaceans, molluscs and fish such as trout, tuna, cod, anchovies and sardines.

Green leafy vegetables such as lettuce and nuts such as walnuts and hazelnuts, almonds and pistachios also contribute to iron intake. Iron-rich protein sources such as beans, lentils, chickpeas, lupins and tofu can also be added to one’s diet. Finally, a balanced diet also includes using pasta, bread and cereals, which contain a varied amount of nutrients.

It should also be kept in mind that vitamin C contributes to iron absorption: a trick can therefore be to add lemon juice to the food we are about to eat or to the water we drink during meals, or to use vegetables rich in vitamin C such as tomatoes, peppers, cabbage and broccoli as side dishes, or to end meals with citrus fruits or vegetables such as kiwi, currants and grapes.

Finally, people who develop anaemia should limit their intake at meals of certain foods that hinder iron absorption, such as dairy products, coffee, tea and chocolate.

Increased ESR: What Does An Increase In The Patient’s Erythrocyte Sedimentation Rate Tell Us?