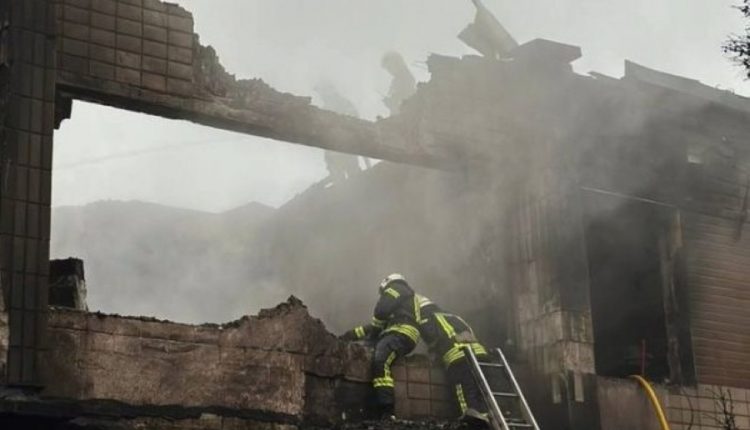 In Brovary, eight kilometres from Kiev, a helicopter crashed near a kindergarten, among the dead were children and the leadership of the Ministry of Internal Affairs

Kiev, a fire broke out on the spot: fire brigade and rescuers are at work

The media, referring to the police in the Kiev region, report the dead.

As a result of the plane crash, the heads of the Ministry of Internal Affairs died: Minister Denys Monastyrskyi, First Deputy Minister Yevhen Yenin and State Secretary Yuriy Lubkovich.

According to the State Emergency Service, as of 11:00 a.m., 15 people died, including three children

25 people were injured (including 15 adults and 10 children) and were hospitalised.

Earlier, the president’s office confirmed that a ‘plane’ had crashed near a social infrastructure facility in Brovary.

The Kiev OVA states that children and employees were in the kindergarten at the time of the accident.

People were evacuated after the fire.

According to Tymoshenko, the state emergency service and all services are already operational.

Still unknown are the reasons for the helicopter crash, an investigation is underway.

Which versions are being considered by the investigation

Ukrainian Air Force spokesman Yuriy Ignat said that the rotary-wing aircraft that crashed this morning in Brovary belonged to the state emergency service.

The exact reasons for the crash are still unknown, but the SBU has already announced the main versions.

There were nine people on board the plane, all of whom are presumed dead, including Interior Minister Denys Monastyrskyi, as well as his deputy and the Secretary of State.

In total, according to the State Emergency Service, 15 people died, including three children.

The helicopter crashed near the kindergarten – in the morning, when parents were taking their children there.

The leadership of the Interior Ministry flew by helicopter on a business trip to one of the ‘hot spots’, said deputy head of the PO Kyrylo Tymoshenko.

Namely, in the Kharkiv region, as it later became known.

At the briefing, he assured that the death of the ministry chiefs would not affect military operations.

In a commentary on the ‘Apostrophe’ TV channel, Ignat said that the emergency rescue service aircraft, which was once a gift to Ukraine from France, crashed in Brovary.

‘Wings’, says Ignat, has many power structures: the border guards, the National Guard, the State Emergency Service also have a special fire-fighting aircraft.

The exact causes of the plane crash are still unknown, but the SBU has already announced the main versions that the investigation is considering.

They are the following:

“The sky does not forgive mistakes, as the pilots say, but it is too early to talk about the reasons, because there are several factors that can cause an accident.

It will not be 1-2 days, because the investigation of a plane crash takes some time,” Ignat said.

That is why a state commission will be set up, which will include various aviation specialists, says the Air Force spokesman.

According to these, the search may take at least several weeks.

“The specialists will set off and collect parts piece by piece, assembling, as it were, a helicopter from the remains.

This is a practice all over the world,’ he explained.

There is a version that the aircraft may have been damaged by the weather: there was fog and wind in Brovary on Wednesday.

Asked by journalists whether investigators are considering the version of the terrorist attack, Kyrylo Tymoshenko replied: ‘The security service is dealing with this issue, there is a criminal case, appropriate conclusions will be drawn to find out what happened’.

Law enforcement agencies invite all people who witnessed the plane crash in Brovary to come forward and tell the details.

War In Ukraine, New Russian Raids On The Red Cross In Kherson

War In Ukraine, Doctors In Kiev Receive WHO Training On Chemical Weapons Damage

Invasion Of Ukraine, The Ministry Of Health Issues A Vademecum For A Chemical Attack Or An Attack On Chemical Plants

November 25, Violence Against Women Day: The 5 Signs Not To Underestimate In A Relationship

International Volunteer Day 2022, IFRC: “Believe In The Power Of Kindness”

Winter sports injuries: the rules to follow to avoid them