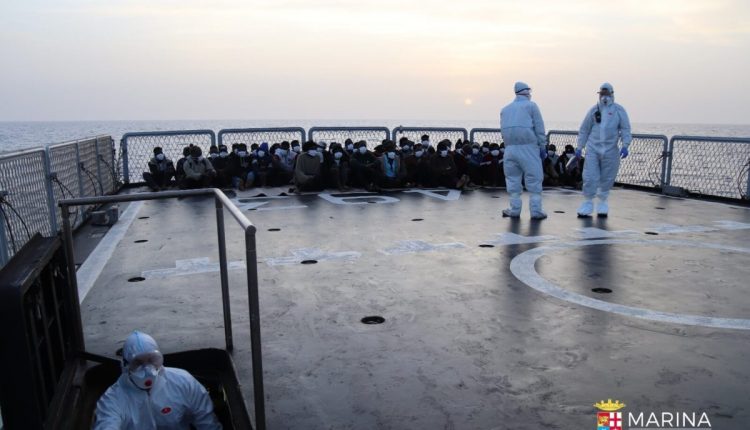 Mediterranean Sea, rescue of over 100 migrants in two operations by Navy and Sea Watch

Two operations to rescue migrants in the Mediterranean Sea. This morning the Italian Navy patrol boat ‘Comandante Foscari’, engaged in the Operation Mare Sicuro (Oms), rescued 49 people on board an overcrowded dinghy drifting in international waters, about 75 nautical miles north of Tripoli

Rescue of migrants by the Italian Navy: this was announced in a press release by the Armed Force

Given the characteristics of the vessel and the complete absence of individual safety equipment, the shipwrecked migrants were given life jackets and personal protective equipment from COVID-19, and were subsequently rescued on board the Navy vessel.

They are currently on board the patrol vessel in good health.

Nave Comandante Foscari, explains the Navy, is a deep-sea patrol vessel, the last of four units of the Comandante class and depends on the Command of the Patrolling Forces for Surveillance and Coastal Defence (Comforpat) based in Augusta.

Operation Mare Sicuro, which was launched on 12 March 2015 following the evolution of the Libyan crisis, provides for the deployment of an air-sea device to ensure presence, surveillance and maritime security activities in the central Mediterranean and the Strait of Sicily, in application of national legislation and international agreements in force.

With the resolution of the Council of Ministers of 28 December 2017, as of 1 January 2018 – continues the press note – the tasks of the mission have been expanded to include logistical support activities to the Libyan Coast Guard and Navy to combat illegal immigration and human trafficking.

The offshore units included in the aeronaval device operate in an area of sea of about 160,000 square kilometres, located in the central Mediterranean, which extends outside the territorial waters of third countries and is bordered to the south by the limit of Libyan territorial waters, while the auxiliary unit – concludes the note – operates mainly by remaining moored in port in Tripoli. 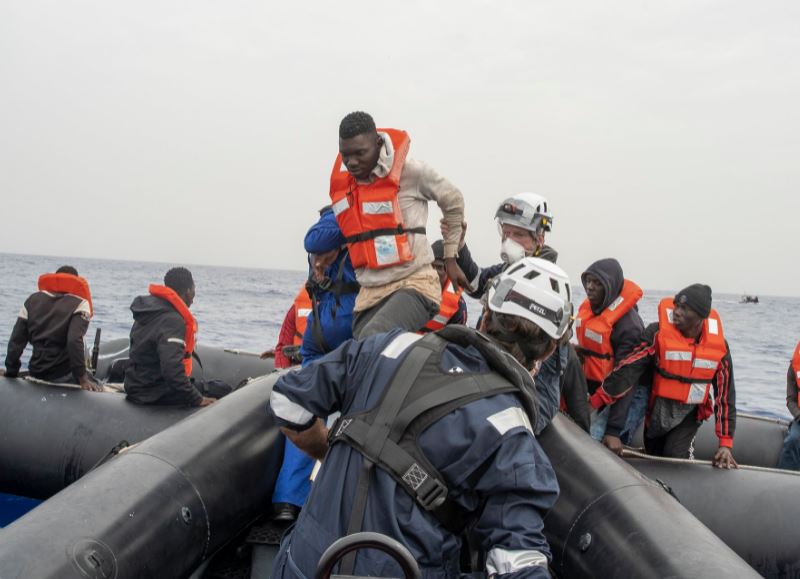 In another operation, Sea Watch rescued 77 people, including 11 women and a baby.

The people on board are now 121″. The same NGO announced this on Twitter, which then denounced: “Shortly before the operation, our crew witnessed the violent interception of another rubber dinghy by the so-called Libyan coast guard”.

Meanwhile, Unicef recalls that since the beginning of the year more than 8,600 migrants have arrived in European ports across the central Mediterranean, one in five of whom is a child.

The United Nations Children’s Fund also points out that there are 51,828 child migrants in Libya and 14,572 are refugees.

Nearly 1,100 are in detention centres in Libya. This week, 125 children, including 114 unaccompanied children, were rescued at sea off the coast of Libya,” Ted Chaiban, UNICEF Regional Director for the Middle East and North Africa, and Afshan Khan, UNICEF Director for Europe and Central Asia and Special Coordinator for Refugee and Migrant Response in Europe, said in a statement.

The central Mediterranean continues to be one of the most dangerous and deadly migration routes in the world.

Since the beginning of the year, at least 350 people, including children and women, have drowned or disappeared in the Central Mediterranean while trying to reach Europe, including 130 last week alone.

Most of those rescued are sent to overcrowded detention centres in Libya, in extremely difficult conditions and with limited or no access to water and sanitation.

Those in detention have no access to clean water, electricity, education, healthcare or adequate sanitation. Violence and exploitation are rampant.

Despite these dangers,” continues Ted Chaiban, “exacerbated by the COVID-19 pandemic, refugee and migrant children continue to risk their lives in search of safety and a better life.

Attempts to cross this sea route are likely to increase in the coming summer months”.

Unicef then appeals to the Libyan authorities to “release all children and end detention for migratory reasons.

The detention of children in migration situations is never in the best interests of the child.

We call on the authorities in Europe and the central Mediterranean to support and welcome migrants and refugees arriving on their shores and to strengthen search and rescue systems”.

Search And Rescue Of NGOs: Is It Illegal?

Pilgrimage on Mount Meron in Israel, at least 44 victims: video of rescuers from Magen David Adom