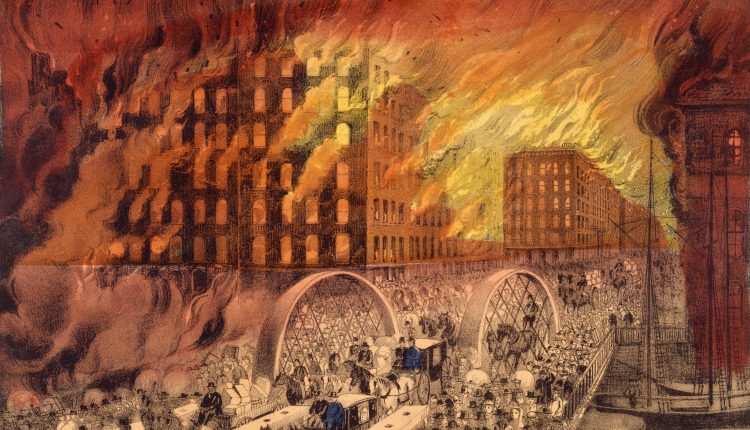 From 8th to 10th October 1871, Chicago saw 6 km2 of the city blew away because of a great fire probably caused by a cow. It’s about the Great Chicago Fire

Bringing the fire under control was a real challenge for the firefighters of the time and when the main cause of the fire was discovered, people were dismayed to hear that the catastrophe was allegedly started by a cow that had inadvertently kicked over a lantern against the wooden wall of a barn; the flames spread very easily and rapidly as most of the buildings of the time were made entirely of wood. That will be recognized as the Great Chicago Fire.

The fire caused mass panic throughout the city, to the extent that terrified citizens tried desperately to reach the side of the city that was least affected to seek refuge. Reports tell of an inferno lasting three days, where the size of the fire was compared to a similar historical episode which had sent the inhabitants of Moscow into a state of panic in 1812.

In a Chicago of 300,000 inhabitants, 90,000 ended up homeless, about 120km of roads and about 190km of sidewalk were destroyed. In addition, 17,500 buildings were completely engulfed by the flames with damage to the tune of about 222 million dollars!

Chicago was promptly rebuilt after the fire, becoming one of the most important cities in the USA; populous and flourishing, but never forgetting such an important but such a dramatic piece of its own history.

Pros and cons of circumcision