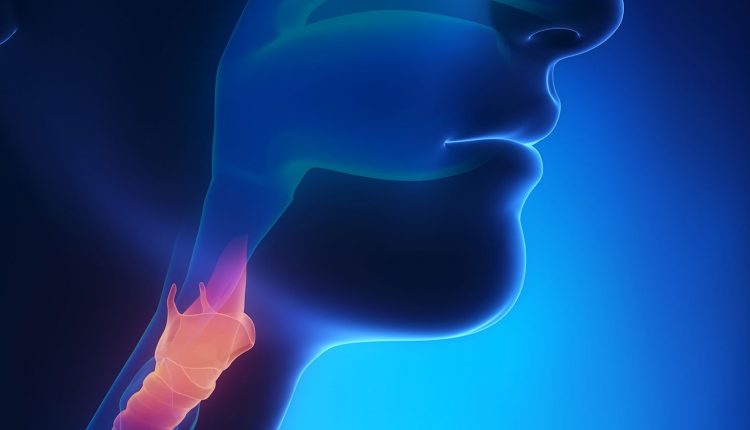 The larynx is the organ responsible for phonation, i.e. the emission of sounds. It is part of the respiratory system and connects the upper airways (nose, sinuses, pharynx) and the lower airways (trachea, bronchi)

The larynx has a cartilaginous structure and can ideally be divided into three parts:

What is laryngeal cancer?

The age group most affected is between 50 and 70 years.

Neoplasms of the larynx originate, in most cases, from the mucosa lining the interior of the organ: the most common is squamous cell carcinoma (95% of cases).

In a smaller percentage of cases, the tumour originates from other tissues, such as muscle or connective tissue (sarcomas), lymphatic tissue (lymphomas) or glands (adenomas).

What are the symptoms of laryngeal cancer?

The most frequent signs and symptoms are:

In the presence of suspicious symptoms, an ENT examination should be carried out.

The most useful examination for diagnosing tumours of the larynx is laryngoscopy, which allows us to assess the presence of ulcerations or laryngeal masses and to evaluate laryngeal function (vocal cord motility).

In addition to laryngoscopy, it is possible to use NBI (Narrow Band Imaging), a system that emphasises mucosal vascularisation, making it possible to identify even the most superficial carcinomas on the basis of their neo-angiogenic appearance.

If a lesion is found in the larynx during the examination, a laryngeal biopsy should be performed by means of a suspension microlaryngoscopy.

If a lymph node swelling of the neck is present at onset, an ultrasound-guided needle aspiration (FNA) may be performed to define its benign or malignant nature.

Finally, imaging examinations such as CT scan, Nuclear Magnetic Resonance Imaging and/or PET scan may be used to assess the extent of the pathology.

The choice of treatment depends on the site and stage of disease on the one hand, and the patient’s general health and life expectancy on the other.

In early stages of disease, transoral surgery with CO2 laser or exclusive radiotherapy can guarantee the same results in terms of healing and local control.

For selected more advanced tumours, an open partial laryngectomy can be performed, which guarantees good oncological control and preservation of the voice without the need for a permanent tracheostoma.

In the case of advanced tumours, on the other hand, the treatment is represented by chemo-radiotherapy or total laryngectomy, i.e. the en bloc removal of the larynx, usually associated with the mono- or bilateral removal of the lymph nodes in the neck (laterocervical emptying).

Total laryngectomy entails the loss of normal airway continuity, which is why a permanent tracheostomy is required to ensure the patient’s breathing.

In the case of advanced disease, surgical treatment may be followed by post-operative radiotherapy, possibly combined with chemotherapy.

Depending on the type of operation performed, it will be possible to recover part or all of the functions performed by the larynx (breathing, swallowing and voice).

If the larynx has to be removed, it will be possible to resume speaking with a new voice called the oesophageal (or erigmo-phonic) voice.

The frequency and type of investigations to be carried out during follow-up depend on the risk of recurrence, which is calculated for the individual patient on the basis of the initial stage of disease and individual risk factors, as well as the type of treatment carried out.

The clinical follow-up examination includes a complete objective examination of the head and neck region and laryngoscopy supplemented by NBI examination.

Malignant Tumours Of The Oral Cavity: An Overview

Tumours Of The Colon And Rectum: We Discover Colorectal Cancer

Tumours Of The Adrenal Gland: When The Oncological Component Joins The Endocrine Component

What Is Percutaneous Thermoablation Of Tumours And How Does It Work?

Colorectal Resection: In Which Cases The Removal Of A Colon Tract Is Necessary

Croup (Laryngotracheitis), The Acute Obstruction Of A Child’s Airways

Fetal Surgery, Surgery On Laryngeal Atresia At Gaslini: The Second In The World

Own The Airway Part 4: Laryngoscopy

What Is Laryngectomy? An Overview